Boba Fett’s Slave I has always been one of the most iconic ships of the Star Wars universe. In LEGO form, its earliest rendition was the blocky set 7144 released in the year 2000. Since then, it has been made into a massive UCS version (75060), a microscale advent calendar version (75146) and several play sets. This anniversary edition closely resembles set 8097 released in 2010, and comes with bounty hunters minifigures Boba Fett, Zuckuss, and 4-LOM, as well as Han Solo (and his carbonite slab) along with a tribute yellow minifigure of Princess Leia with 20th anniversary printing on a stand and on the back of her torso. 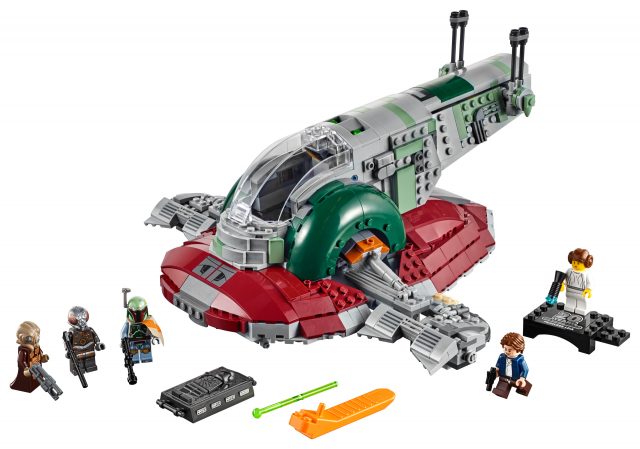 Build Boba Fett’s personal Slave I starship and travel with him through the LEGO Star Wars galaxy in search of fugitives! Grab the handle and fly him around. Pull the triggers to fire the spring-loaded shooters. Load Han Solo trapped in carbonite into the hold and deliver him to collect your payment. It’s another exciting day in the life of a bounty hunter!

The Snowspeeder first appeared in grey tones in set 7130 released in 1999, followed by no less than seven playset variants and two UCS sets, the most recent being 75144. This anniversary set drops the familiar orange flourishes and appears more like the Snowspeeder from set 75049 released in 2014. This set comes with minifigures including Luke Skywalker, Dak Ralter and a Hoth Rebel Trooper as well as a tribute minifigure of Lando Calrissian with 20th anniversary printing on his stand and on the back of his torso.

Sound the alarm, Echo Base is under attack! Win the Battle of Hoth with Luke and Dak Ralter in their amazing LEGO Star Wars Snowspeeder from Star Wars: The Empire Strikes Back. Speed over the ice and launch the spring-loaded shooters. Then fire the rear stud shooter and harpoon with string. On the ground, help the Rebel Trooper take aim and fire the gun tower stud shooter. Those Imperials must be defeated!

Anakin’s self-built podracer from The Phantom Menace first appeared in LEGO form in set 7131 released in 1999. It also has been made in microscale in 2012 (30057) and now is resurrected, looking most like the racing pod from 2011’s Anakin and Sebulba’s Podracers. This anniversary set comes with Anakin Skywalker, Padmé Amadala (with new shorter bendable legs) and a yellow tribute minifigure of Luke Skywalker again with 20th anniversary printing on his stand and torso. 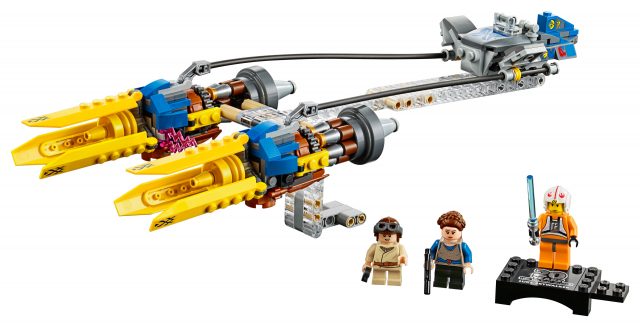 Speed to victory in Anakin’s Podracer! Sit young Anakin Skywalker in the cockpit and lower his goggles ready for the race. Then fire up the huge engines, grab the play handle and zoom through canyons of Tatooine… or your living room! With Anakin at the controls, victory is yours!

A more unique choice to celebrate the 20th anniversary of LEGO Star Wars, the armored AT-RT Clone Scout Walker comes with a Dwarf Spider Droid and minifigures including Chewbacca, a battle droid, and a 41st Elite Corps Clone Trooper, as well as a tribute Darth Vader minifigure with anniversary stand and torso. The Scout Walker first appeared in set 7250 from 2005, though this version looks like an updated and re-skinned version of 2013‘s blue 75002 AT-RT from the 501st Legion. 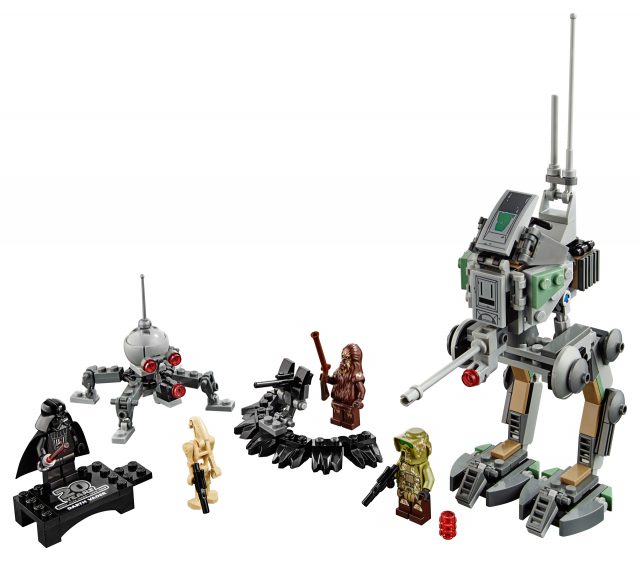 Protect the Wookiee warrior with the armored Clone Scout Walker! Sit the Kashyyyk Trooper in the seat of the armored AT-RT Walker and stride in battle. Turn and fire the stud shooter before the Dwarf Spider Droid destroys the trench with its own stud shooter. The Clone Army must win at all costs!

From time to time, LEGO creates a Star Wars vehicle all their own. Such is the case with the Imperial Dropship, with its first and only appearance in 2008’s Star Wars Legends set 7667. Like the original, the anniversary set comes with a rare black Shadow Trooper and three Stormtroopers, as well as a yellow tribute minifigure of Han Solo with anniversary stand and torso printing.

Deploy the troopers with the LEGO Star Wars Imperial Dropship! Load them onto the platform and store their stud blasters for the flight. Then sit the Shadow Trooper in the cockpit, fire up the engines and blast off for another exciting battle against the Rebels!