UPDATE: Totally not from The Last Jedi! Still trying to figure out why LEGO made a set based on a 1980’s Kenner toy…

Today we are taking a close look at 75204 Sandspeeder. The set includes 278 pieces with two minifigures, and features a familiar-looking vehicle that will presumably be in The Last Jedi. Even though we just got the first official photos of this set a few days ago, beginning today it’s available from the LEGO Shop online for $29.99. 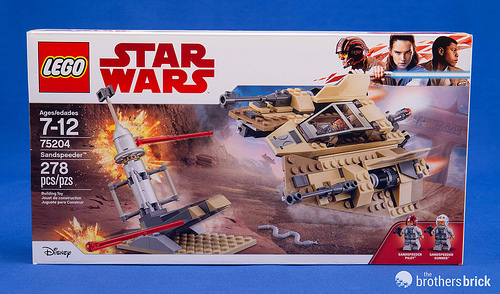 The vehicle is very obviously patterned after the T-47 airspeeder. In The Empire Strikes Back, the Rebels modified the workhorse vehicle for cold-weather use on Hoth, where it became commonly known as a snowspeeder. Its appearance in the new film further reinforces pre-release perceptions among Star Wars fans of the distinct parallels between Episode IV and Episode VIII. The box features The Last Jedi artwork, leading one to suppose this vehicle will be in the movie on Jakku or some other unknown desert planet (or maybe even a return to Tatooine). 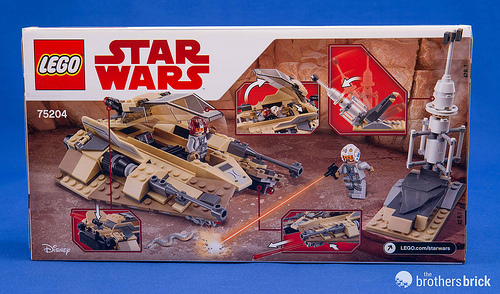 The back of the box shows several play features, including the cockpit opening and the moisture vaporator’s tipping mechanism. The vaporator is similar in design to those found on the desert planet Tatooine, and a variety of moisture vaporator designs have appeared in previous sets. 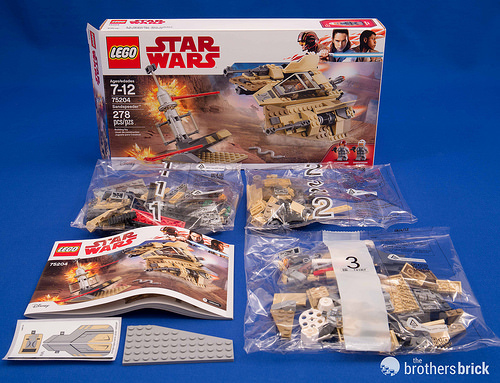 Inside the box we find three numbered bags, a small, stapled instruction manual, stickers loose in the box, and a loose left wedge plate. The lone loose left wedge plate confused me, as none of the bags were torn or open, and the right wedge wasn’t loose. Eventually, I spotted the right wedge plate in bag 3. I can’t imagine a reason why this part couldn’t have been included inside a sealed parts bag, but the instructions indicate it’s supposed to be loose, so we’ll chalk this one up to an arcane packaging machine necessity. 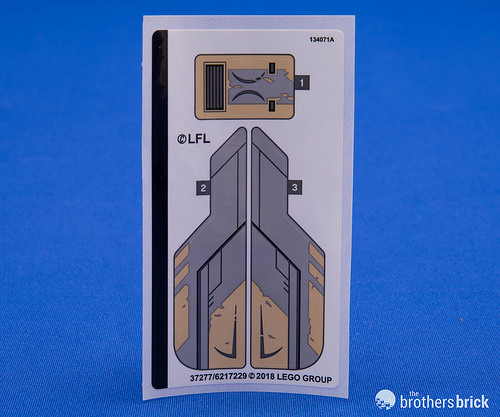 Thankfully, the sticker sheet is minimal with only 3 stickers. 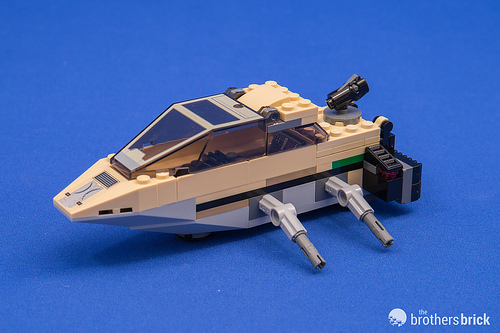 The first bag is used to create the angular cockpit in tan, with a newly printed canopy to fit this adaptation of the T-47 airspeeder. Technic parts are used to create four legs that the wings will be mounted on, leaving the cockpit with a somewhat bug-like appearance at this stage. 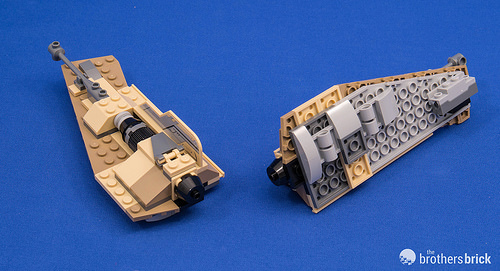 Bag 2 contains the parts for one wing of the Sandspeeder (after adding the loose wedge plate), while bag 3 has all the parts for the other wing and moisture vaporator. The 1×8 tail piece with stepped fin is only the fourth set to ever have the piece, and the first in the color tan. The pieces are stickered on the sides facing out to give the vehicle a more unique profile, though looking at the speeder from above leaves the non-stickered sides exposed. The right wing is an exact mirror of the left. 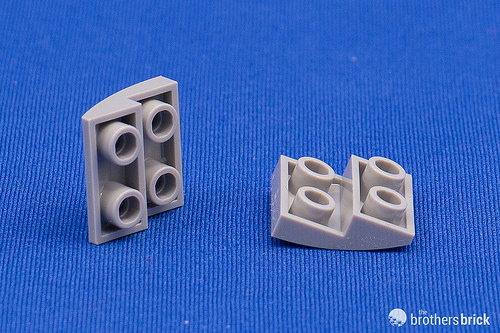 The wings each include a new element, the double inverted baby bow. These are used to add much-needed structural support to keep the pin holes secured to the wing when they are eventually attached to the main body of the Sandpeeder. 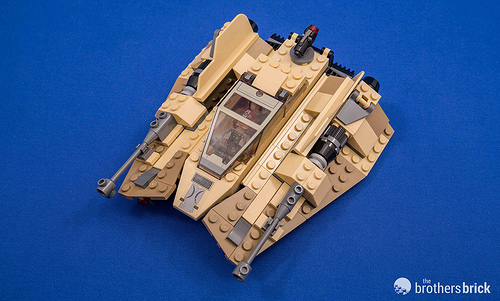 The wings fit in quite snugly and lock into place. While previous iterations of the T-47 airspeeder had wings that could move slightly up and down, this version is true to the movie model with secured, immobile wings. A stud shooter is placed on the back, as well as two spring-loaded dart shooters on the front underside of each wing. 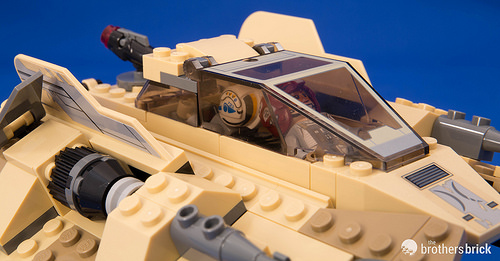 The vehicle bears nearly the exact same detailing for each laser cannon as previous smaller-scaled Snowspeeders, and a sticker provides some needed detailing on the front hood. 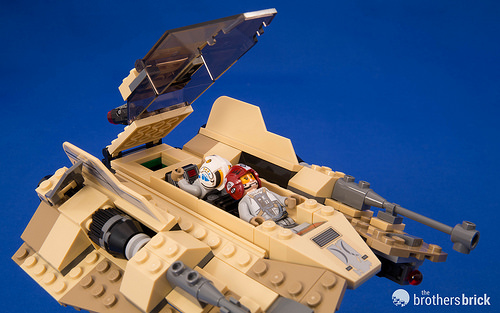 The cockpit holds the two minifigures, though each needs to lean back significantly for the canopy to close completely. A small storage area is included for the blasters near the rear of the cockpit. 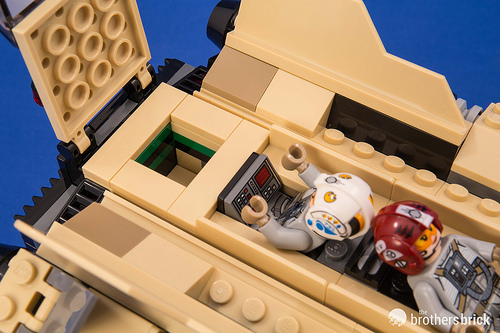 Technic gear racks are used to approximate the cooling fins, with several dark tan slopes being used for some welcome color differentiation. A lone stud shooter cannon is mounted on the rear deck in place of a harpoon gun. 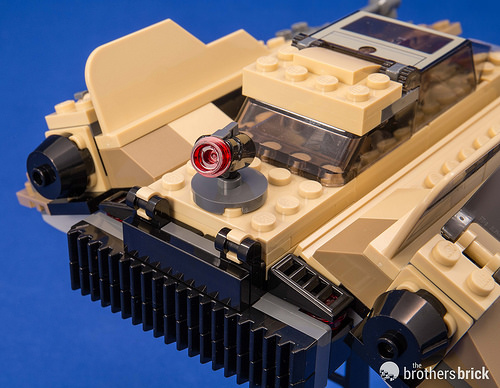 From underneath, three boat studs are used as landing gear. The model sits securely on these three points, with the wing tips just barely resting above the play surface. 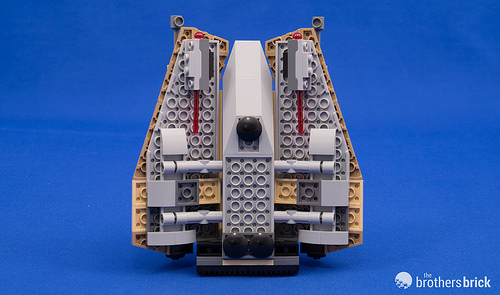 From the front, the spring-loaded dart shooters beneath the wings interrupt the Sandspeeder’s profile. They’re not accurate, but what’s a Star Wars ship without some action play features? 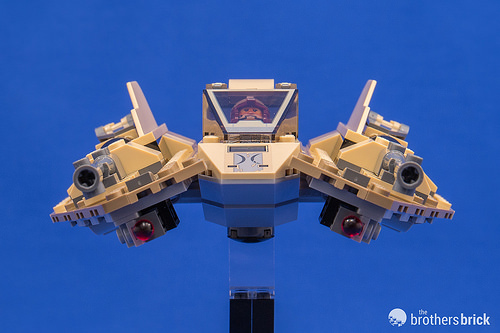 The vehicle is extremely swooshable, though holding it from the bottom is slightly difficult due to the sloped underside. Overall it is a solid build and fantastic-looking—if not wholly new—vehicle.

The moisture vaporator is a simple build, occupying the last section of the instructions, but it really captures the look of the device. At the device’s base, a single axle is slid into two pin holes rather loosely, locked into place with some tactful rockwork to provide the pivot point for the build’s play feature. 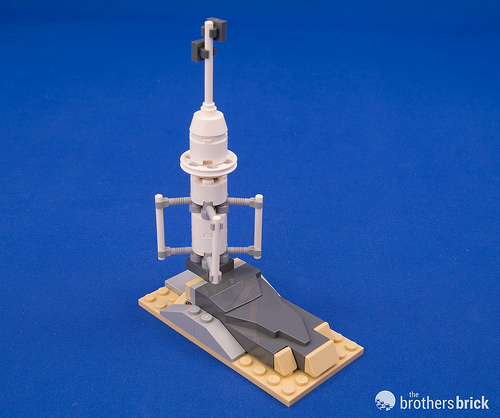 A smaller rock BURP piece is used as a holding area for a light grey snake. The grey snake is only available in that color in one other set, 70912 Arkham Asylum, where it forms part of a statue. The rock piece doesn’t seal firmly because the edges hit several studs on the plate, though it is easy to bounce the structure up and down for target practice. 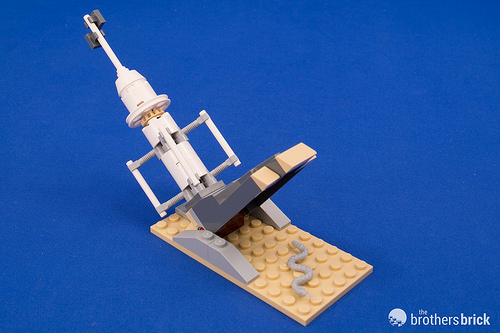 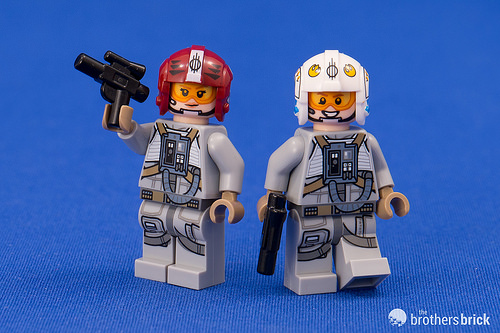 The two minifigures included are named on the box as Sandspeeder Pilot and Sandspeeder Gunner. We don’t know yet if this is an attempt to avoid spoilers, or if these are truly generic nameless characters. The female pilot sports a red helmet while the gunner has a white one, reminiscent of the helmet Rey holds at the beginning of The Force Awakens. 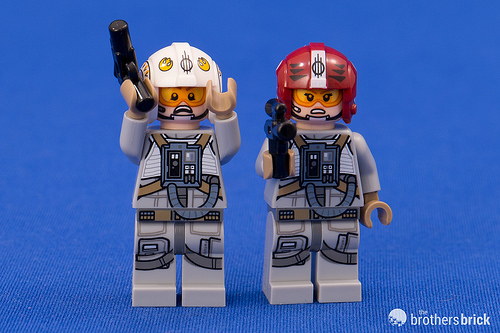 Each head has two expressions, happy and concerned. The torso and legs are quite excellent prints, though identical for both minifigures, and the grey flight suits add a welcome new shade to the lineup of Rebel/Resistance pilots. The backs of the torsos are printed with the jacket’s simple back along with the belt. It strikes me that these minifigures could easily be repurposed for any fighter pilot or similar military personnel.

At $29.99, the set feels like a solid build, though the inclusion of a “baddie” like a standard Stormtrooper or perhaps an elusive Sandtrooper would have rounded out the set quite nicely. The female pilot and minifigure printing, as well as a few rare parts, will make this set a must-buy for most LEGO Star Wars collectors. 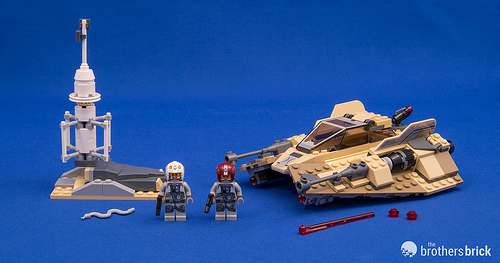 With the standalone review out of the way, let’s talk about the elephant in the room. Is this just a recolor of the 75049 Snowspeeder? At first glance, yes. The Snowspeeder set retailed for the same $29.99 and even contained precisely one more piece than the Sandspeeder set, though it did not have a freestanding moisture vaporator, instead opting for a Snowtrooper and cannon. (Interestingly, though 75049 Snowspeeder is retired, you can still get the same Snowspeeder model in the UCS 75098 Assault on Hoth.)

That said, let’s take a closer look at at the models side by side. 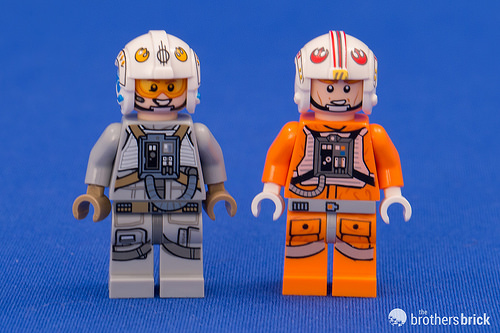 Rebel/Alliance pilots all have a similar look, though the orange jumpsuits are now gone. The torso printing on the Sandspeeder variant actually extends down onto the legs, meaning that the parts will not be as interchangeable. Noticeably, the Snowspeeder set came with a third minifigure, a Stormtrooper. 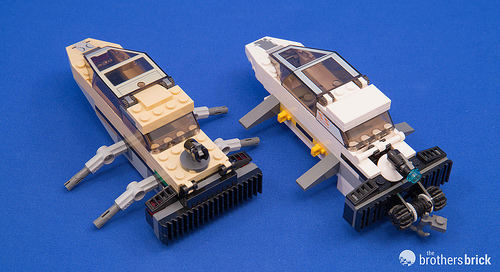 Looking at the cockpits, the first difference is clear. The Sandspeeder utilizes Technic connections to attach the wings where the Snowspeeder used click hinges that rested on downward angled slopes. The clear canopies are the same element with different printing, while the entire canopy of the Sandspeeder is hinged at the very rear (giving room for that small storage compartment). The Snowspeeder came with additional stickers on the rear windshield. 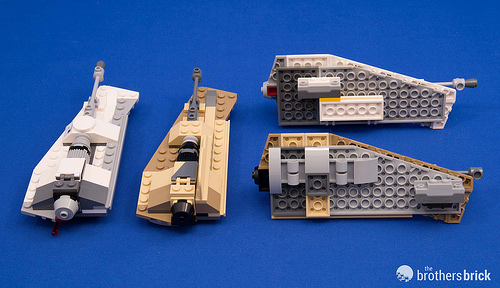 The wings are nearly identical, except for the structural improvements on the underside to secure the Technic pins. The spring shooters have been moved to the front of the vehicle for better accuracy when firing, and the greebling is slightly different on the wings. The most readily apparent difference, however, is that the Sandspeeder also has two stickered fins on the wing tops. 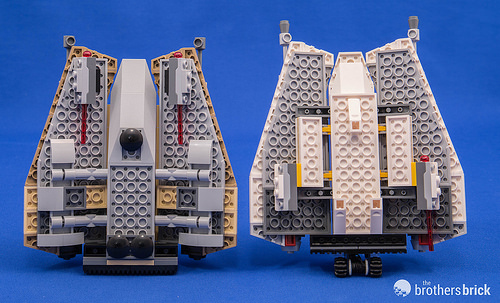 On the bottom, the three boat studs make the Sandspeeder slightly more stable and swooshable in comparison to the clunky landing gear of three inverted slopes used in the Snowspeeder. The front underside of the cockpit also is more angled than its previous variant, opting for a pair of large slopes instead. 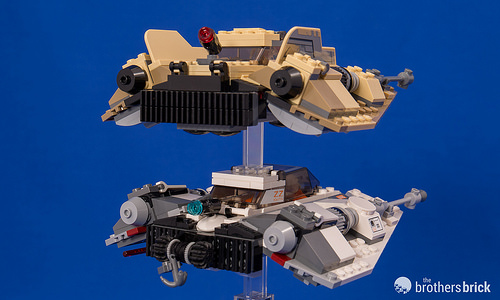 The biggest difference aesthetically, apart from the fins, is the back of the airspeeders. While the Snowspeeder has cooling fins made with grille tiles (which gives it a similar look to the recent UCS Snowspeeder) and sports the tow hook and cable, the Sandspeeder uses Technic gear racks and looks more solid, though it loses the hook’s play features. 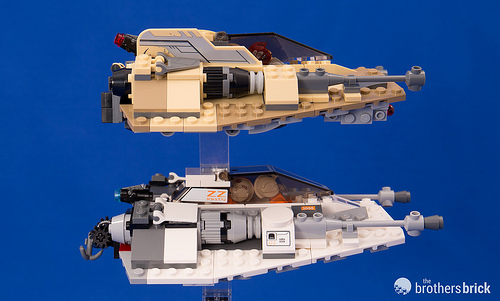 Overall, the side view of the airspeeders shows how similar the two vehicles are. So is the Sandspeeder a simple recoloring? Not quite. While both are based on the T-47 airspeeder, the LEGO models have more differences under the skin than you’d expect. Nevertheless, I’m now eager to see The Last Jedi to determine how the ship actually fits into the Star Wars universe.

A special thank you to Bricks and Wheels for letting us borrow a copy of 75049 Snowspeeder so we could compare the two sets.