Solo: A Star Wars Story opens in theaters today, but if you’re like many of us here at The Brothers Brick, you already saw it yesterday evening at an opening night event. With the movie now in theaters, we’re taking a look back at our reviews of the LEGO Star Wars sets that accompany the movie, comparing them with the real characters and vehicles. 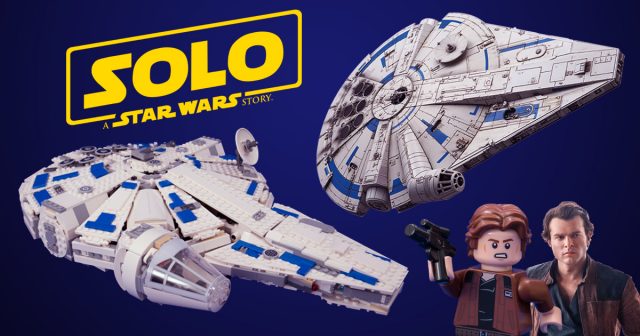 Obviously, the nature of this follow-up analysis is that it will be full of spoilers, so if you haven’t seen the movie yet, by all means go out and do that — it’s not a perfect movie, but it’s certainly a fun adventure in the broader Star Wars universe — before coming back and reading this.

In our original review of 75212 Kessel Run Millennium Falcon, we noted the many differences from (and similarities with) previous LEGO Millennium Falcon sets, but didn’t really address its movie accuracy. The iconic vehicle’s color scheme is true to the movie, and many key details are similarly accurate — the earlier Falcon has single dorsal and ventral laser cannons to Han’s heavy quad-cannons, and Lando brags about adding an escape pod between the front mandibles. 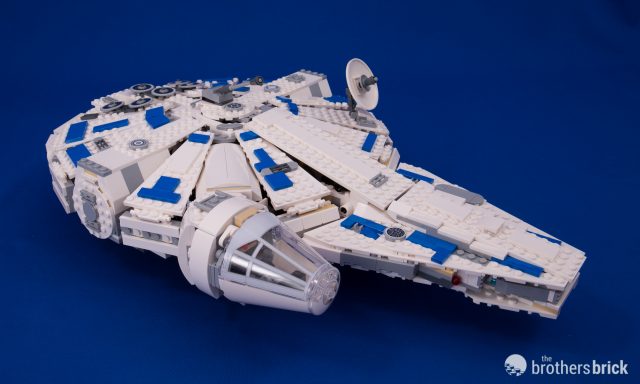 Given the original production designs for the Falcon as a cargo pusher, we weren’t sure whether that pod was a cargo pod or an escape pod, but the movie confirms that it’s the latter, complete with pilot controls and small engines so it can fly off into the mouth of the space kraken near the Maw. However, the movie never depicts the pod’s interior. 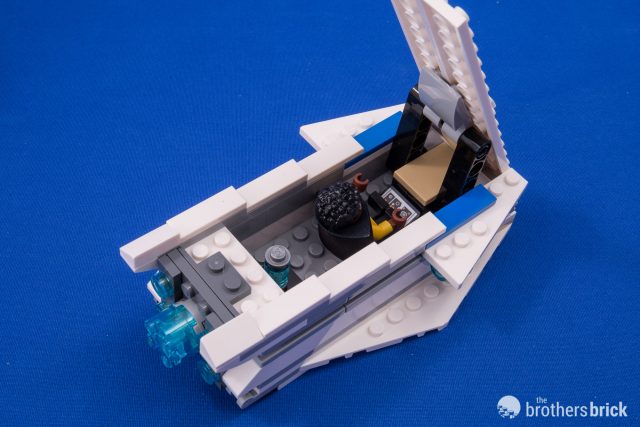 The LEGO Falcon’s interior also includes many of the key features of the movie version, including the iconic seating area with dejarik holo-table, bunk, and bar. However, even the UCS Falcon lacks a fully detailed interior, so other areas like Lando’s walk-in closet full of capes don’t turn up in the LEGO set.

The LEGO set’s minifigure selection matches the Kessel run crew and characters they encounter on the notorious spice mining planet. Lando wears his flamboyant yellow outfit, while Han and Qi’ra wear more utilitarian garb. It’s unclear why a new Chewbacca minifigure was necessary (the difference in his gear is extremely minor), but variants are never unwelcome. 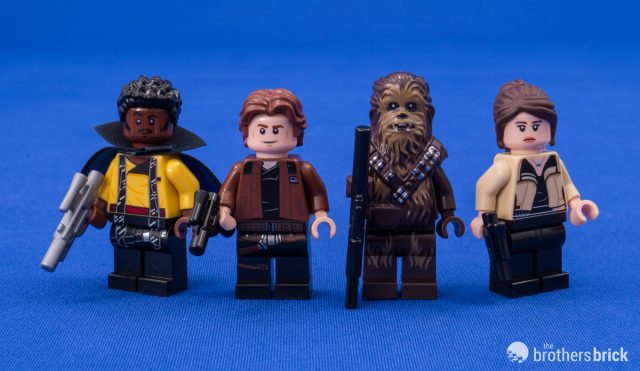 The Kessel minifigures include a highly accurate version of the villainous Quay Tolsite, along with two droids that serve in the command center. The red “Kessel operations droid” appears to be an S1D6-SA-5 protocol droid and doesn’t have much screen time, but Lando’s droid companion L3-37 liberates DD-BD in one of my favorite moments in the movie. We still have some issues with DD-BD’s construction — the droid could certainly have been shorter, and we provided a straightforward solution to the droid’s unsightly gaps in our original review. 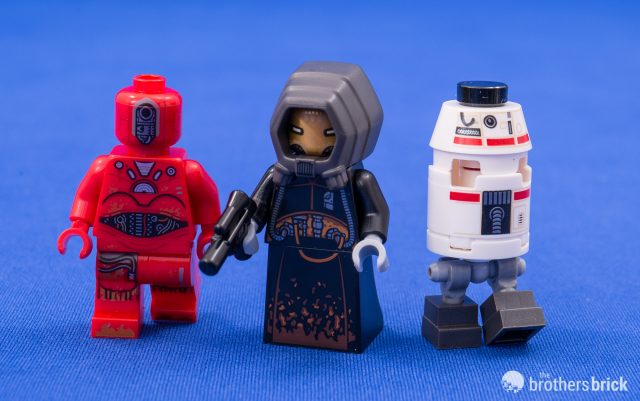 Our biggest beef with this original Falcon remains after seeing the movie: That is, the front mandibles are disproportionately shorter, and the Falcon looks rather stubby without the escape pod in place. Nevertheless, LEGO’s design team did a great job representing Lando’s — and ultimately Han’s — Millennium Falcon. 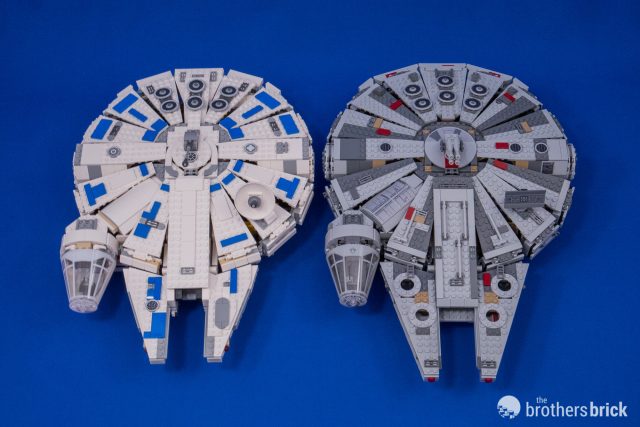 My personal favorite set from the LEGO Star Wars Solo sets is 75209 Han Solo’s Landspeeder. It was disappointing that the Mobquet M-68 Landspeeder had so little screen time in the actual movie, and that it ended up wedged sideways and abandoned as Han and Qi’ra try to escape Corellia. It’s a testament to the LEGO design team’s attention to detail that the vehicle is captured so accurately in the LEGO set, from the curved rear spoiler to the exposed machinery on the speeder’s left side. 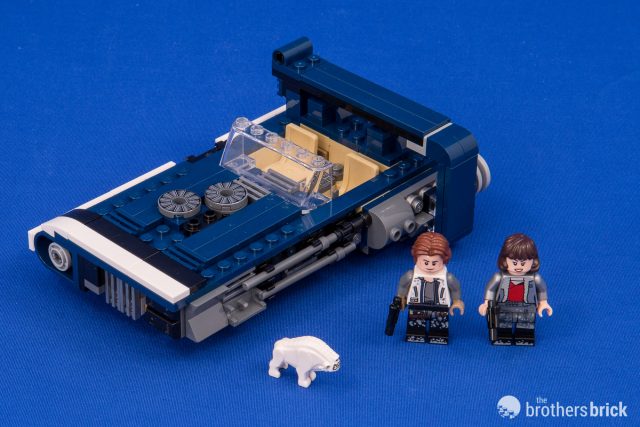 Dashing my hopes, neither the movie nor the Solo: A Star Wars Story The Official Guide reference book ever reveals very much about the vehicle, so the LEGO set’s many fantastic play features are likely due merely to the excellent imaginations of the LEGO design team. However, unlike Rey’s speeder, the movie doesn’t entirely preclude the possibility that this speeder has all this going on under the hood. 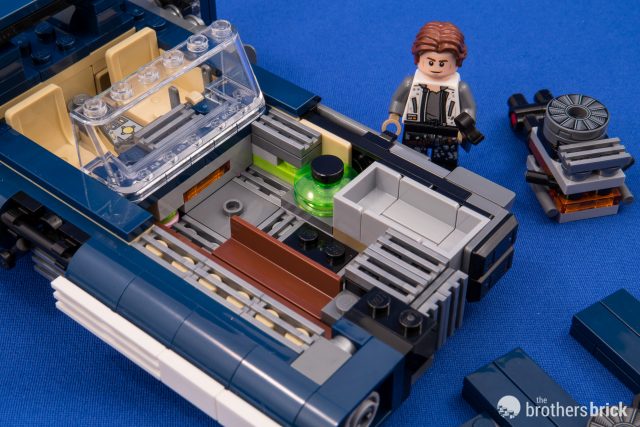 Both minifigures depict Han and Qi’ra as we first encounter them at the beginning of the movie, complete with brine-spray muck on their clothes. 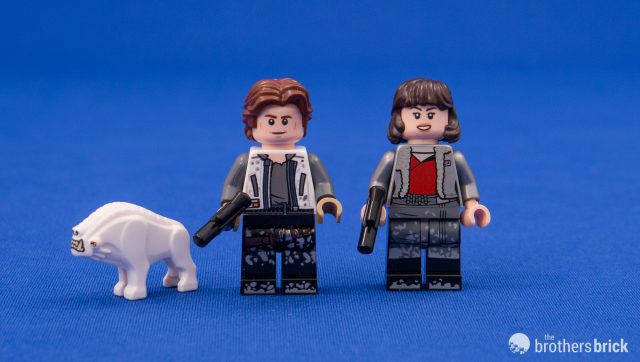 Two other vehicles show up during the same speeder chase scene on Corellia at the very beginning of the movie. Members of the White Worms gang try to chase down Han and Qi’ra in the dark blue landspeeder, with an alien named Moloch driving the gray, boxy speeder in 75210 Moloch’s Landspeeder. The LEGO set depicts a Trast Heavy Transports A-A4B truckspeeder.

With the focus of the chase on Han and Qi’ra in their stolen speeder, Moloch and his landspeeder get even less screen time. Still, the LEGO designers have again captured key details like the cage on the side of the speeder for a pair of Corellian hounds and the single-occupant cockpit. The minifigures and creatures are the highlight of the set, with Moloch, Rebolt, and a pair of Corellian hounds. Moloch is a photo-sensitive Grindalid alien and drives the speeder in the chase, but I’m not sure I even remember seeing Rebolt (though the DK reference book does have him threatening Han, so he must have a speaking part I’ve already forgotten). Moloch’s cowl armor includes a mask, and having a way to expose his face underneath would have been a cool feature of his minifig. Like Han and Qi’ra, both minifigures have gray spots depicting the brine from the nearby Corellian ocean’s spray. 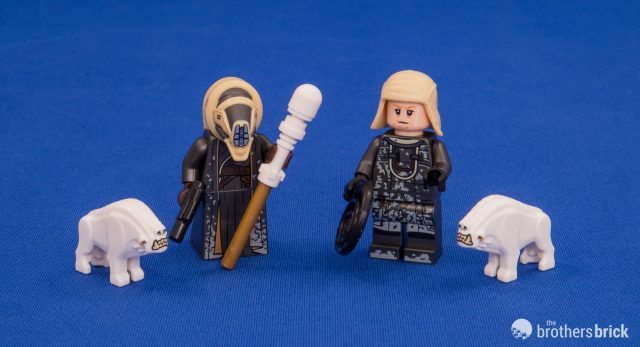 The third participant in the Corellian speeder chase is a single-seater patrol trooper’s Aratech C-PH speeder bike, as depicted in 75207 Imperial Patrol Battle Pack. The trooper gets catapulted off his speeder as it crashes alongside Han as he and Qi’ra speed toward the spaceport. LEGO Star Wars Battle Packs often feature small vehicles and equipment that don’t depict anything “real” in the movies, but this is a remarkably accurate version of the small speeder. 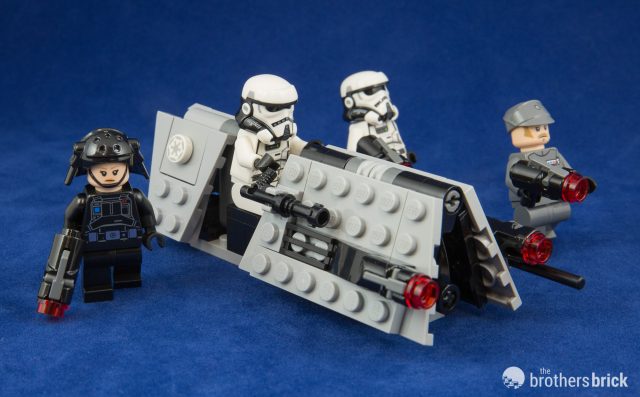 In keeping with the speeder, the four minifigures also depict characters from the first scenes on Corellia, with patrol troopers to ride the speeder, an emigration control officer handling departures at the spaceport, and the Imperial recruitment officer Han signs up with — and who assigns him his surname “Solo”. Han and Qi’ra primarily interact with a female emigration officer (Lead Transport Security Officer Falthina Sharest), and never interact with any of the emigration officers dressed like Imperial fleet troopers in black. It’s disappointing not to have any cold-weather range troopers from the train heist scene (echoes of Firefly…) in minifigure form yet, but we can hope that LEGO will release those in upcoming waves. 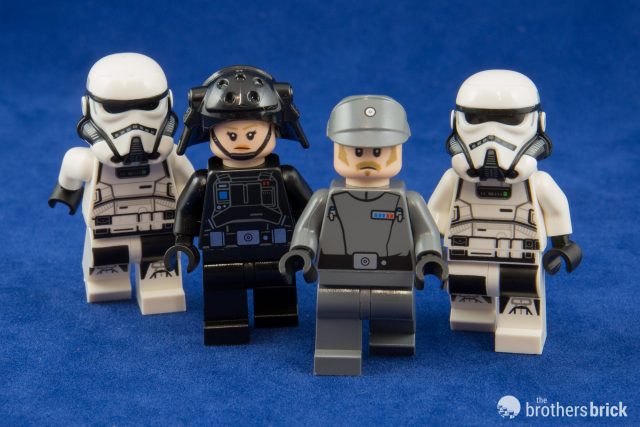 In a scene reminiscent of the asteroid field chase in The Empire Strikes Back, several TIE fighters pursue the Millennium Falcon as she attempts to flee the mines on Kessel. 75211 Imperial TIE Fighter may be a standard-issue TIE fighter, but it’s the first to take advantage of the new curved windscreen piece first introduced with the First Order TIE back in 2015. An updated “regular” TIE fighter is certainly welcome after such a long gap, but TIE variants are always interesting, so it’s a little disappointing that we don’t have the new TIE/rb heavy starfighter variant unleashed by the Imperial Star Destroyer inside the nebula. 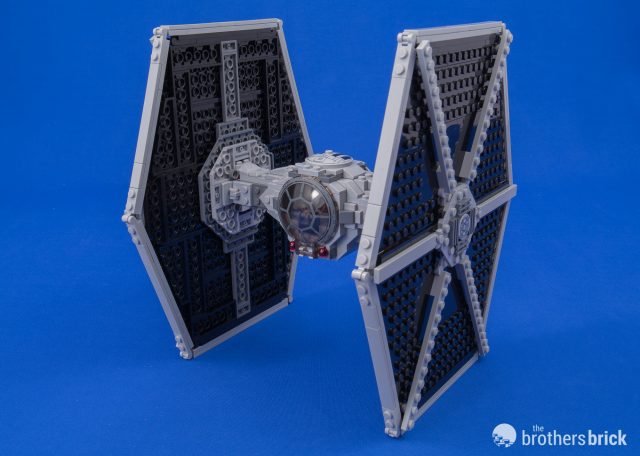 With the Kessel Run Falcon set handling the key characters from that act in the movie, the minifigures in this set actually depict characters from the Mimban battle scene when Han Solo first meets Tobias Beckett and his crew, and escapes with Chewbacca and joins up with Tobias. The movie reveals that Tobias is indeed in disguise (as the LEGO product description indicates) as an Imperial captain, but Han himself is just a front-line trooper in the Imperial army. We noted in our original review that Tobias’s minifigure appears to have a partially obscured colonel’s rank badge (three red squares next to a number of blue squares), but I could have been mistaken — that combination appears to be unique to an Imperial Security Bureau Inspector General. Regardless, this combination of red and blue squares is not a captain’s rank badge. (Thrawn author Timothy Zahn showed us a similar rank badge design error on the Grand Admiral Thrawn minifigure in 75170 Phantom II.) 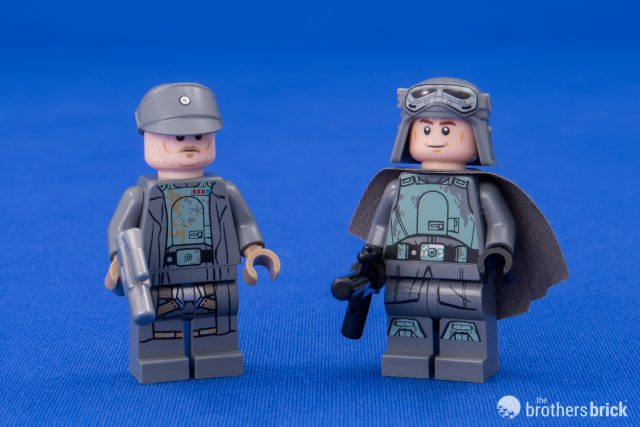 Mudtroopers on Mimban wear unique helmets with prominent breathing tubes (as seen on the disguise worn by the four-armed Ardennian Rio Durant), so the Imperial stormtrooper appears to simply be a very muddy regular trooper with a bit of extra gear (like the cape or “slick”), accompanied in this LEGO set by a very shiny TIE fighter pilot. 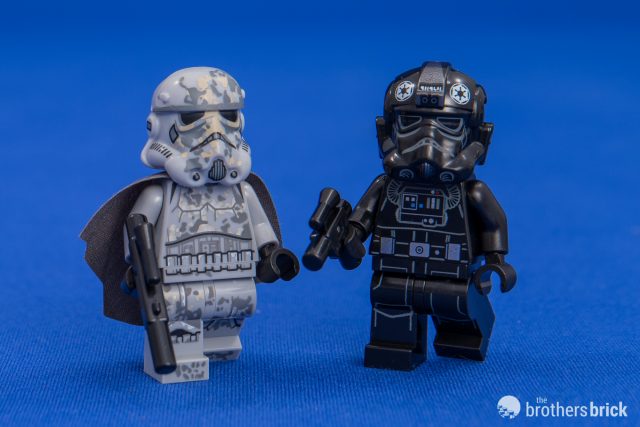 It’s evident that the LEGO Star Wars design team used their collaboration with Lucasfilm to good effect in creating the first wave of sets for Solo: A Star Wars Story. Although the Fall Preview event in New York City last week revealed no further Solo sets as part of the Fall 2018 LEGO Star Wars sets, previous Star Wars movies since The Force Awakens have had at least two major waves, including Rogue One (the first of the standalone “Anthology” movies). So, we can probably expect more Solo sets in the future. Given that, what are some obvious omissions from this first wave that could turn up later?

What else would you like to see as LEGO sets or minifigures from Solo: A Star Wars Story. Sound off in the comments!