For long-time Star Wars fans, perhaps the most exciting thing to emerge from the current batch of LEGO Star Wars sets inspired by the Rebels animated TV series is the new Grand Admiral Thrawn minifigure, released as part of the 75170 The Phantom set, which depicts the modified Trade Federation shuttle that replaces the first Phantom part way through season 3. 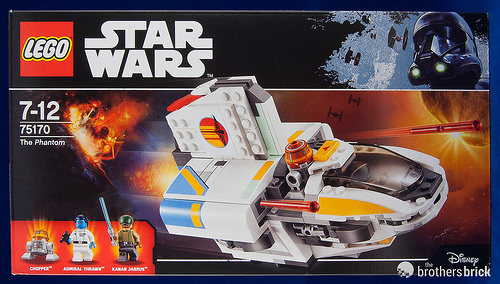 Grand Admiral Thrawn himself was created by sci-fi author Timothy Zahn in Heir to the Empire, the first book in Zahn’s epic Thrawn Trilogy. TBB spoke with Timothy Zahn at Emerald City Comicon recently, and got his first impressions of the Thrawn minifig, which we’ll share later in our review.

The Phantom II comes in three numbered bags, with a modular build process. The first bag includes Kanan Jarrus and the parts for the lower hull of the vehicle. LEGO Star Wars sets have become increasingly complex in their construction techniques, and this small set is no different. The build begins with a Technic core for the vertical fin or stabilizer that comes later. There’s some studs-out construction for shaping, with slope bricks affixed sideways to the sides of the hull. There are some nice pieces buried inside the build, including a pair of corner tiles in light orange — potentially worth replacing with less-desirable parts from your own collection as you build the official set. 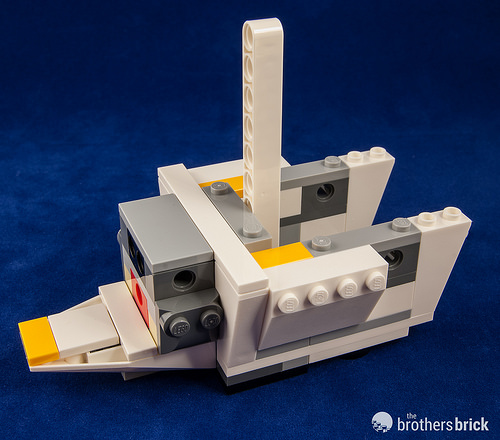 The second bag includes the pieces for the upper section of the shuttle’s hull, along with the astromech droid Chopper. The roof of the rear passenger/cargo compartment integrates an interesting mechanism that we’ll come back to later when we talk about play features. At first I thought it was a crane of some sort, but that turns out not to be the case. 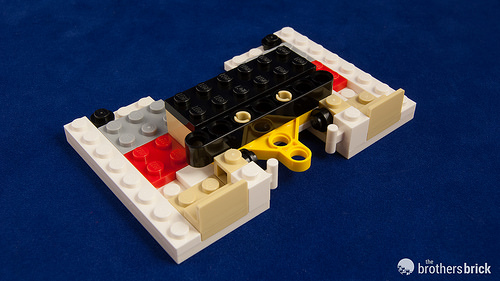 For a set of this size, this is a highly, incredibly stickered set. There are 12 stickers on the sticker sheet, and nearly all of them are rather integral to the design of the vehicle as seen in the TV series. 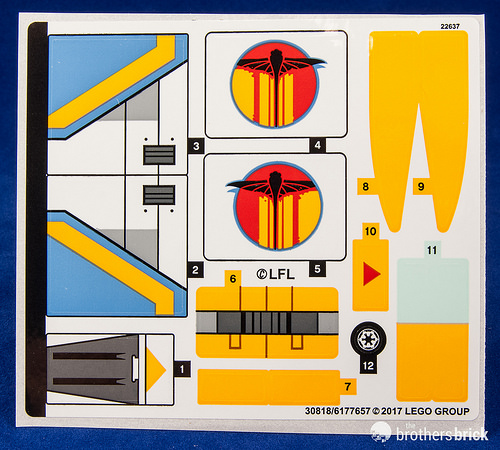 The upper hull is nicely rounded with curved slopes, though they’re heavily stickered. Nevertheless, the designers have created brick-built solutions where possible, including curved slopes and wedge plates in medium blue and several pieces in aqua. The spring-loaded shooters are integrated sideways with brackets beneath the white 4x8x6 curved slope. 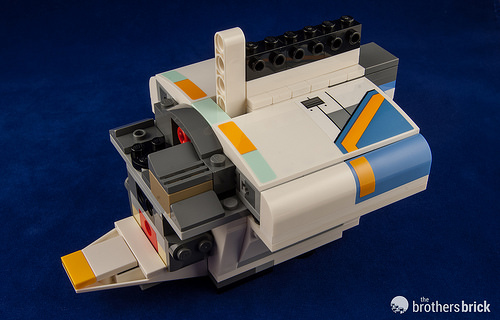 The third and final bag includes Grand Admiral Thrawn and the remainder of the parts for the shuttle, including the top fin and the pilot’s cockpit. The fin is built from plates attached studs-out to 1×1 bricks with studs on two sides. The relatively simple stacked-plate construction surrounds a rather complex core that integrates with the earlier Technic beam for sturdiness.

The cockpit compartment is a separate module that attaches to the main hull with Technic pins. Since I’m not aware of the cockpit detaching from the vehicle in the TV show, I’m calling this a modular component of the LEGO build, not a play feature — though I’m confident younger builders will take advantage of the modularity and use it as an escape pod. 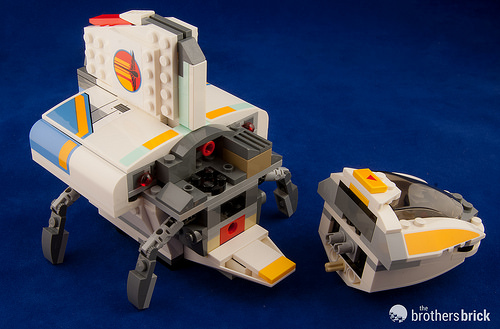 The set depicts a highly customized Sheathipede-class transport shuttle, modified by the Ghost crew from a vehicle found abandoned on a Separatist base. For a set with only 269 pieces, the end result is a rather hefty little vehicle that sits sturdily in the hand. 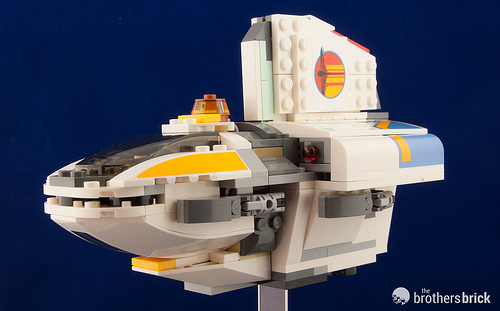 The cockpit fits one minifigure, and as on the first Phantom Chopper has an astromech socket behind and slightly to the right of the vehicle’s center-line. 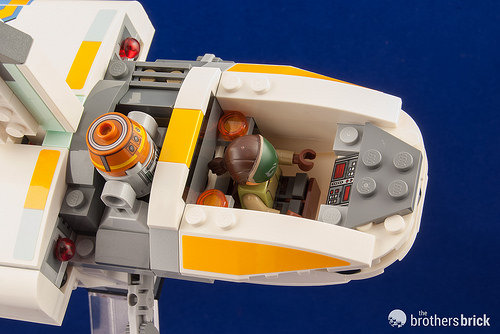 The LEGO set accurately captures the insectoid shape of the original Neimoidian vehicle, with four landing struts that flip out and down for stability on the ground. 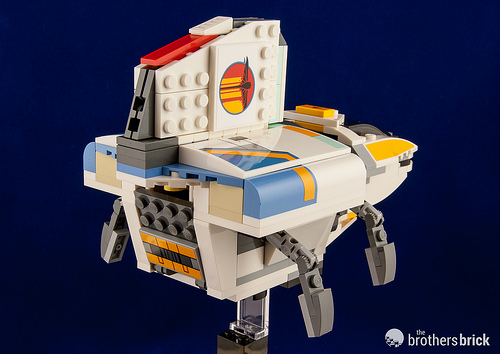 The crew/cargo compartment opens with a ramp that lowers, and can fit a cargo crate (which has a unique 1×1 Imperial logo sticker placed on a Collectible Minifigure stand as a lid). 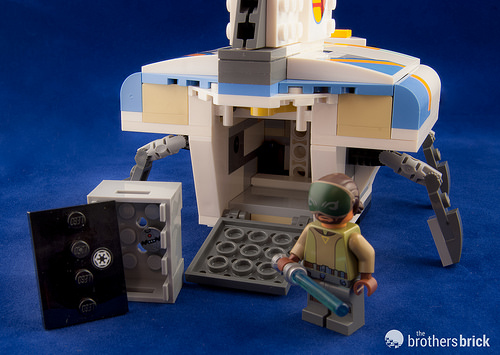 It turns out that yellow Technic piece built into the roof of the compartment isn’t a crane after all — no hook, no line. Instead, it’s a lever for activating the pair of spring-loaded missiles whose launchers are also built into the roof. 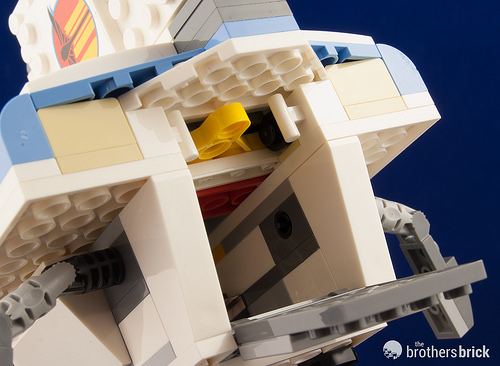 By sliding the lever left and right, you can fire each of the missiles, seen here in a forward view. 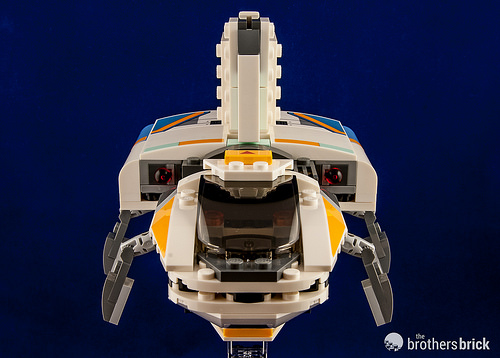 The Phantom II does fit in the same slot on the back of the LEGO Ghost that the first vehicle fit, adding a bit of play value, but the scales of the two vehicles are completely different and the poor Ghost looks rather ridiculous with both incarnations of the Phantom astride its back.

Younger builders and fans of the Rebels TV show are likely buying this set for the cool play features, new Kanan Jarrus minifigure, and so on. But those of us who devoured the Expanded Universe novels of the 1990’s are here for just one thing — the inimitable Grand Admiral Thrawn. Lucasfilm has resurrected Thrawn from the ash-heap of Legends status by including him in the third season of Rebels.

The Grand Admiral Thrawn minifig has dark azure hands, a dark azure head with red eyes, and dark (“earth”) blue hair, reflecting his non-human Chiss heritage. He wears a white Imperial uniform with Grand Admiral insignia, which we’ll return to in a moment. His head is reversible, with stoic and angry expressions. 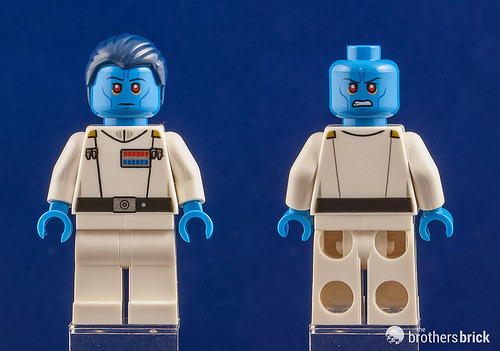 At Emerald City Comicon last month, TBB Senior Editor Chris Malloy and I attended a session with Thrawn creator Timothy Zahn, who was promoting his new fully canon (non-EU) novel titled Thrawn, set in the years ahead of his new appearance in Rebels. The session happened just one day after this new LEGO set had finally been released here in the United States, so Chris and I stood in line after the session to ask Mr. Zahn to sign our Thrawn minifigs.

When we got to the front of the line and showed him the LEGO minifigure version of his literary character, his face lit up and we talked with him for a few minutes (with very belated apologies to those standing in line behind us). Timothy Zahn said he’d tried finding the set at a local store himself, but it had already sold out or wasn’t in stock yet. Looking closely at the minifigure, he pointed out that the minifigure actually had an incorrect Grand Admiral’s insignia on Thrawn’s chest, based on preliminary rather than final artwork for the TV series: Zahn showed us that the top row of the red and blue insignia should have three red squares on the left and three yellow squares on the right, with a full row of blue below. Instead, the minifig (and several other Star Wars toys based on the early artwork) has a full row of red — something we would never have noticed if the character’s own creator hadn’t told us!

Overall, Timothy Zahn was very clearly quite pleased with the LEGO rendition of his creation, and graciously signed little stands that Chris built (complete with microscale versions of Thrawn’s Star Destroyer flagship, the Chimaera. 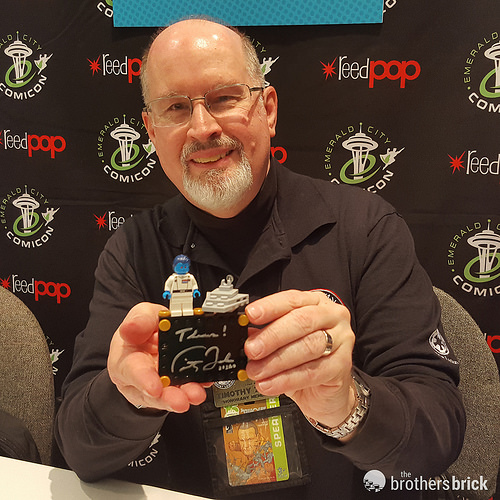 Oh right, there are other minifigures in this set. The Kanan Jarrus minifig is completely new, with new prints for his head, legs, and torso, as well as a new hairpiece/mask. The minifig depicts Kanan as he appears at the end of Season 2 and throughout Season 3 of Rebels, with eyes blinded in a lightsaber battle with a certain surviving Sith.

The astromech droid C1-10P, or “Chopper” to the Ghost crew, is identical to the version that appeared in the previous Phantom set and in 75158 Rebel Combat Frigate. 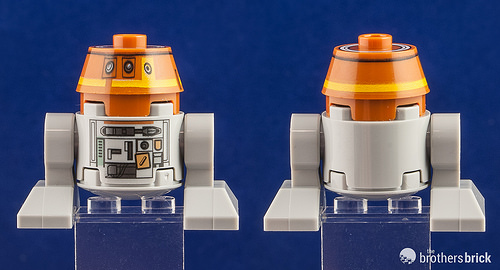 At $30 for 269 pieces and three minifigs, the set is comparable in price to other LEGO Star Wars sets, though unlikely to be reduced significantly in price based on its collectibility among Thrawn fans (it’s already sold out directly from Amazon.com, and only available from third-party sellers at a markup).

The set includes several parts in interesting colors like medium blue, light orange, and aqua, though no completely new parts that we’re aware of. But we suspect most buyers will be picking the set up because they’re either Rebels fans or fans of Timothy Zahn’s Grand Admiral Thrawn, not for parts in cool colors. 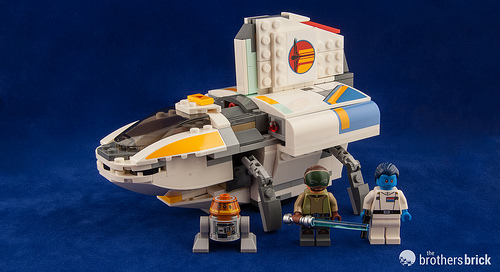 Even if you can’t get your Thrawn minifig signed by Timothy Zahn, this is still a cool little set that we can heartily recommend. And if you’ve run into Mr. Zahn at one of his book signings over the last couple of months and you’ve gotten your fig signed too, share your photos and experiences in the comments!