I obviously hadn’t seen the movie yet when I reviewed 75099 Rey’s Speeder on the day the set came out back in September, so I had no idea whether the LEGO set was in any way accurate. I was most suspicious of all the fun play features built into the set — the stud-flinger weapons, the opening doors, the inner compartment, and so on. Now that I’ve seen The Force Awakens twice (my inner Star Wars nerd having also reawakened), I wanted to mod the LEGO set to make it a bit more accurate to the movie. 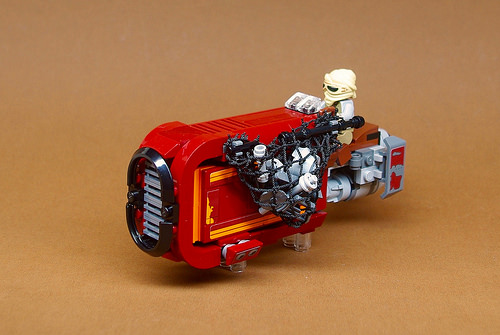 To be honest, the stock LEGO set now feels a bit like an entry in our Pimp Rey’s Speeder contest — though I still love it. When I got home from the movie again yesterday, I pulled out my two copies of this lovely little set along with a few choice pieces from my existing collection and set to work to build a movie-accurate, unmpimped version of Rey’s speeder.

Rather than a LEGO creation built entirely from scratch like nearly all the models we feature here on TBB, this is a lot like the “kitbash” process plastic modelers use, so I thought my build process might be interesting enough to share. I’ll avoid plot spoilers, but in case I mess up, hit the jump for my full write-up.

I wrote in my original review, “The ‘real’ speeder in the movie doesn’t seem to have a bunch of greebles stuck to the side of the vehicle, so I can only assume that the tools attached there on the LEGO version are actually tools.” Uh, no. Those random bits attached to the side of the speeder seem to be standing in for the net full of salvage that’s even visible in the trailers. My first modification was to remove all of the tools/greebles and build attachments for a net. 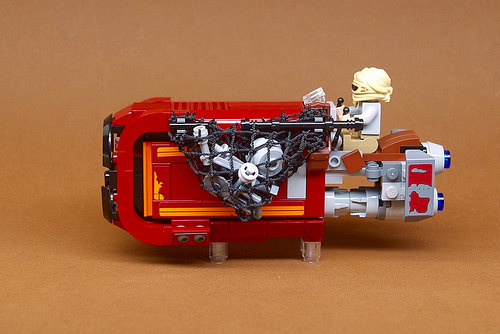 Next, those stupid doors! The movie speeder basically has flat sides, with no large doors apparent from either trailer stills or the movie. I replaced the doors on both sides with a 4×9 panel tiled in dark red, and took the orange stripe stickers from both copies of my set and added them there instead. (If I were to try again, I’d probably brick-build the orange striping in dark orange instead of bright orange.) Another benefit of removing the doors is that the unsightly clip-and-bar hinge in the LEGO set is no longer needed.

The stud-flingers on both sides of the official set were in the same spot as some angled panels that stand out from the lower sides of the speeder, so I replaced the stud-flingers with 1×2 cheese slopes on silver 1×1 round plates, with the appropriate stickers from the set (which do seem to represent these panels).

With the sides complete, I attached a standard LEGO net to the clips using Rey’s staff and a black “gun” piece from the greebles, then filled the net with more of those tools and other random bits from the extra set. Rey’s bag hangs next to the net, as also seen in the movie and trailers.

The biggest structural change I made to the official set — and (other than some red tiles) the only one that required me to go find pieces from my own collection — was the front grill. In the movie, the grill has an oval black rim, but this is completely missing in the LEGO set. Fitting the mudguards onto the existing SNOT-built front with the lower mudguard upside down proved a bit of a challenge, but with some interior headlight bricks and the existing studs-out construction, I think I managed it — it’s my favorite new detail on my own version. 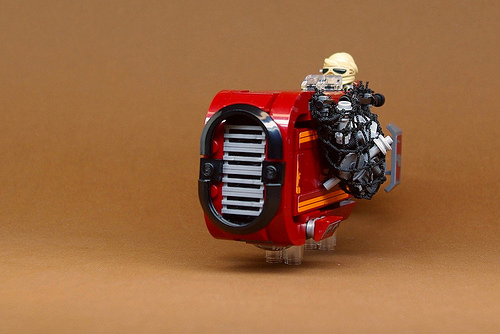 My final version is probably about 70% the original set, and uses a good chunk of the parts from the second copy of the set (it was basically destroyed when I was done).