The LEGO Collectible Minifigure Series 18, also known as the party series, was revealed a few weeks ago, but today we got a closer look in person at the New York Toy Fair. The 17 minifigures in the series are celebrating 40 years since the first LEGO minifigure was produced: the classic policeman. The series will be available on April 1 for $3.99 USD per blind bag. 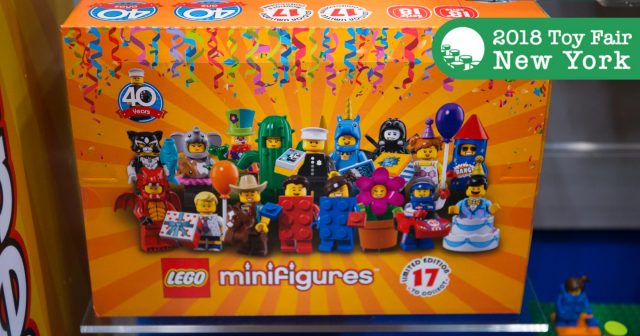 We were able to film our interactions with the series, so watch this video and then read our first impressions about each minifigure below.

The series as a whole will likely be very popular judging by the crowds trying to get a peek at them this morning. Here are all of them together, orange bases and all. 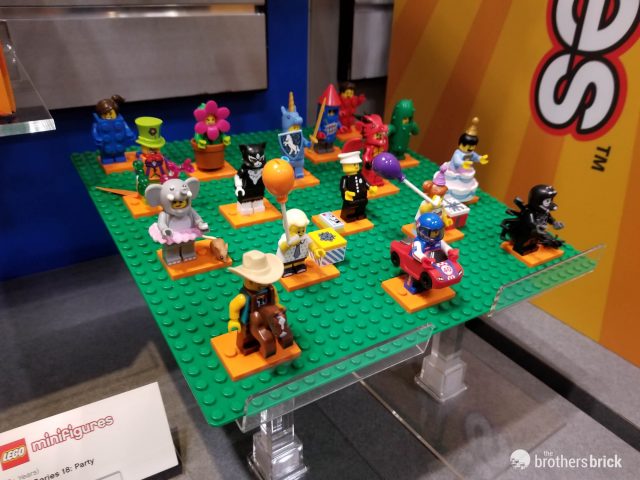 The blind bags have the man of honor front and center, with confetti and ribbons decorating the package. The 40th anniversary logo is featured on the upper right, while Series 18 is listed on the lower right, all while there are a unique total of 17 minifigures to collect from the series. Let’s have fun with numbers! 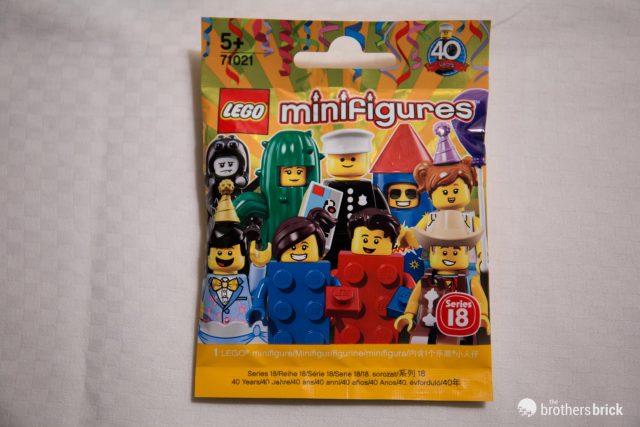 The likely reason for having only 17 minifigures is because the box’s size remained the same, but many of the figure’s costume pieces are much bigger than previous series, leaving less room in the box for multiple copies of three more minifigures. 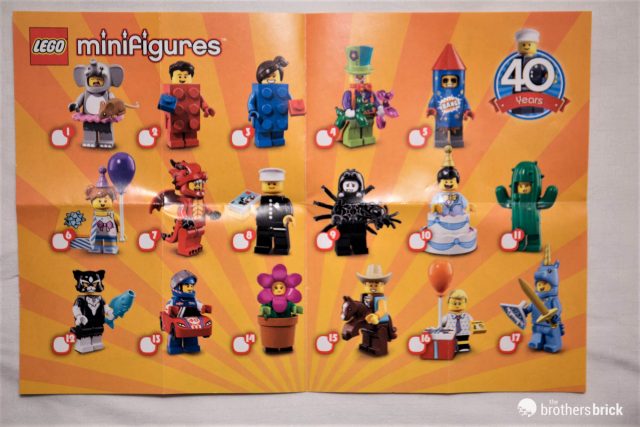 The insert shows all of the minifigures together, as well as the 40th anniversary logo again, so let’s take a look at the reason for the celebration.

The Police Officer is a replica of the very first minifigure produced by LEGO in 1978. He comes with his signature white cap and a miniature version of the set he first came in, 600 Police Patrol. 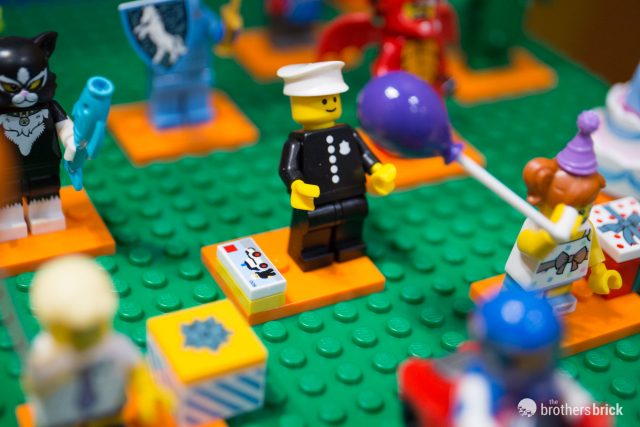 The orange balloon is a standout, though sadly glued together which will make them easier to find. His new hair will come in handy, and the 2×2 present base is a brand new hollow piece, so you could actually use it as a gift box. 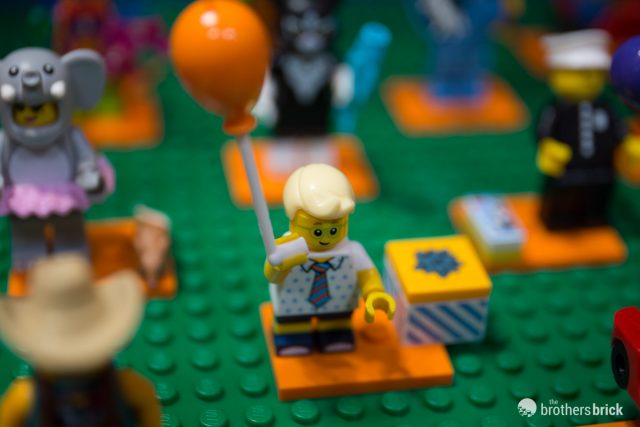 The girl gets a purple balloon and a different printed present. We were able to get our hands on the Birthday Party Girl, so we will open it up for a review soon. 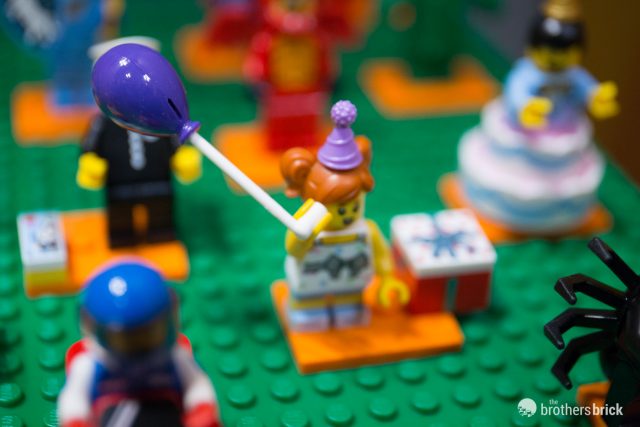 Cake guy will be perhaps the easiest minifigure to feel for of all time, and yes, he pops out of the cake. 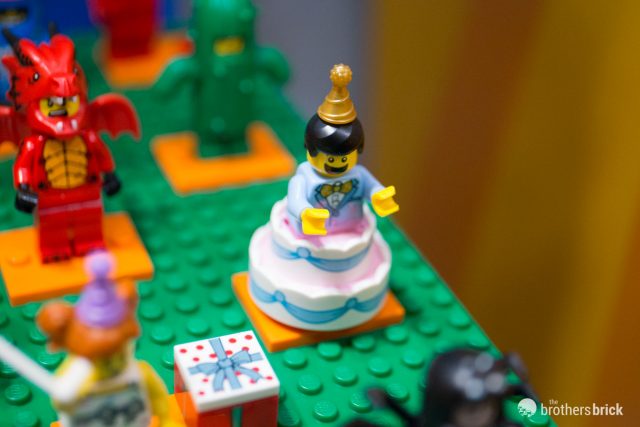 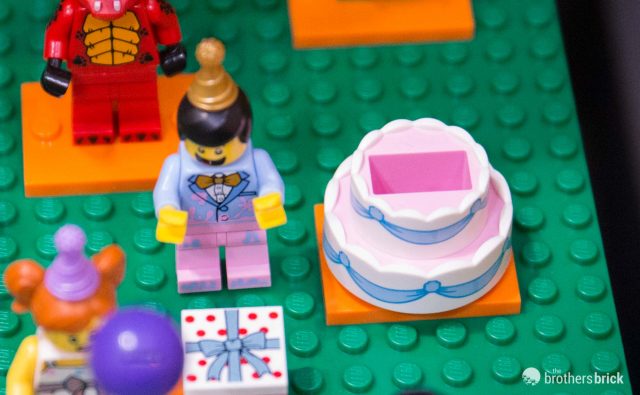 The Party Clown has long tux tails, a newly colored hat (formerly only belonging to the Penguin from the LEGO Batman Movie), a red bow ti and two new balloon animal elements. Certain to make anyone smile. 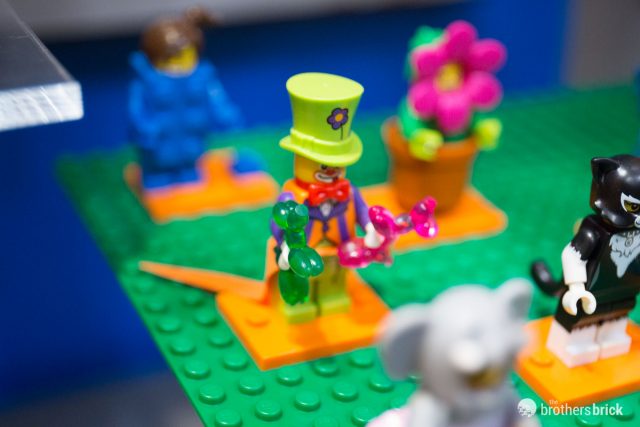 The first of a pair, the red brick suit stands out since the arms are actually attached to the brick. Someone was sneaky and switched the 1×1 plates. It should be blue instead. 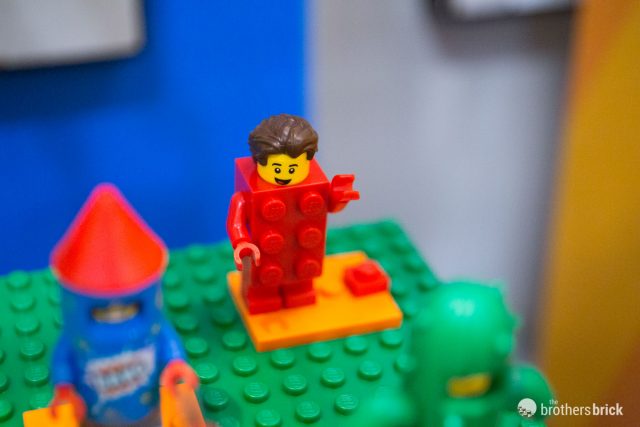 Same as for the guy but the colors swapped! And yes, she should have a red 1×1 plate instead. 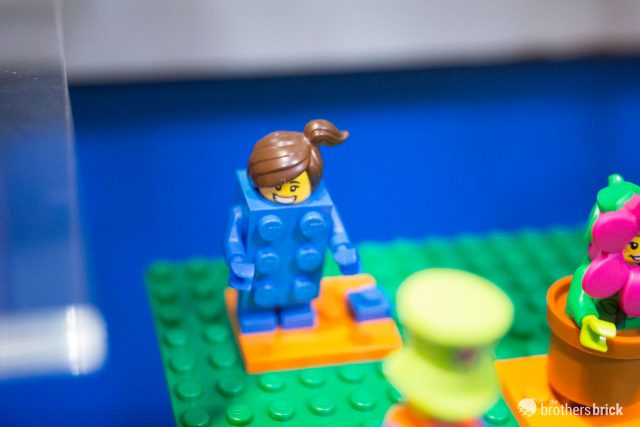 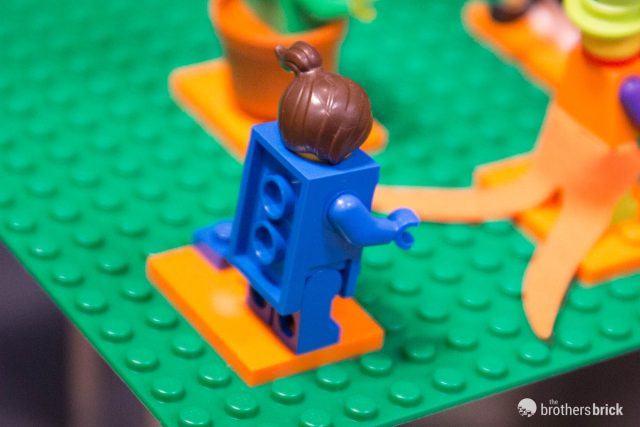 He will surely light up any party, though we discovered he has a plain blue torso underneath that fireworks costume. 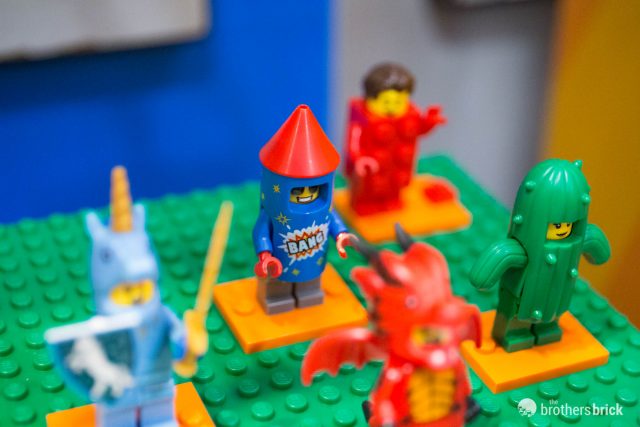 The race car element is attached at the hips, like the yellow duck floating ring from the LEGO Batman Minifigure Series. 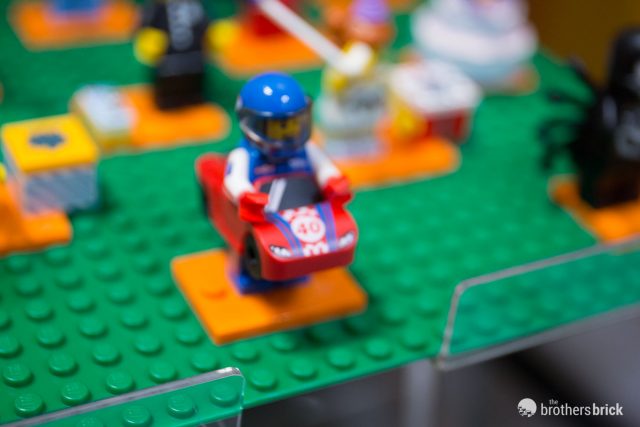 This sad Venom cosplayer has a great outfit, but by the look on his face it appears he has arachnophobia. When lying flat on his face, he could pass for being a real spider. 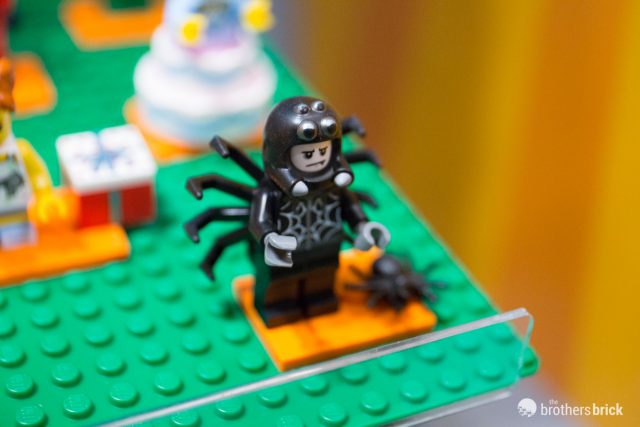 The dragon head hearkens back to the Castle theme with similar printing, while the minifigure expression is priceless. The wings are the same mold as from the previous minifigure series Gargoyle 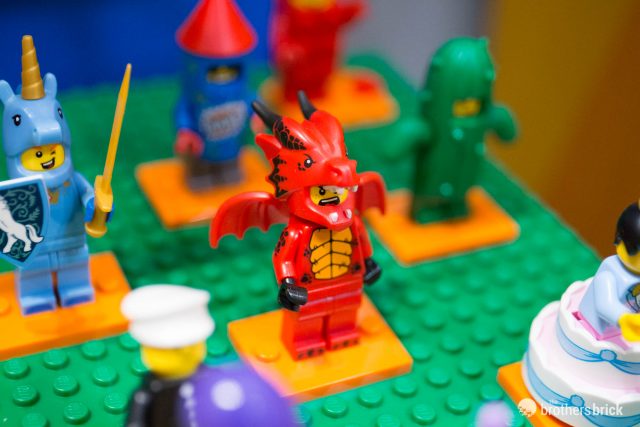 Another easy to feel for minifigure, the Flower Pot Girl is cute and surprisingly solid, and we want to see her next to her cousin Plant Guy from the Monster series. 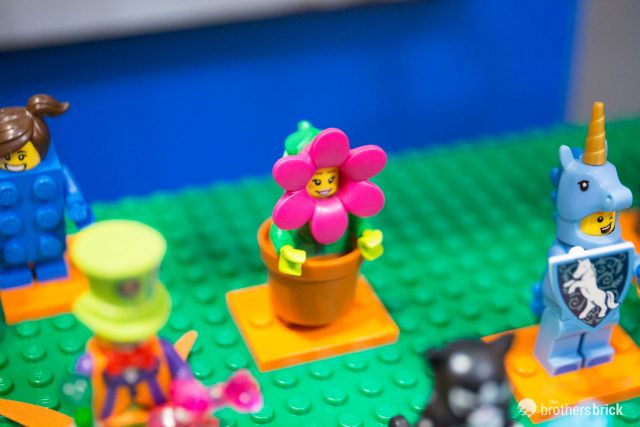 Underneath that cat mask is actually a face with what looks to be face paint of a kitten, whiskers and all. That fish is an awesome accessorie as well. 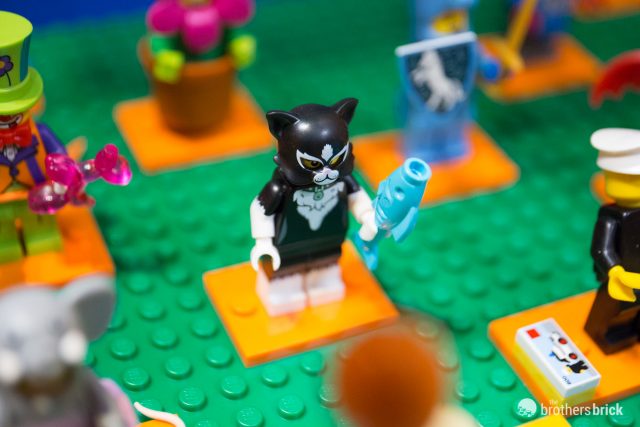 In the video, you can see that the rat is actually sports a different colored tail. The mold is also different that that of Scabbers, recently announced in the Hogwarts Great Hall set, so that makes for two new vermin this year! 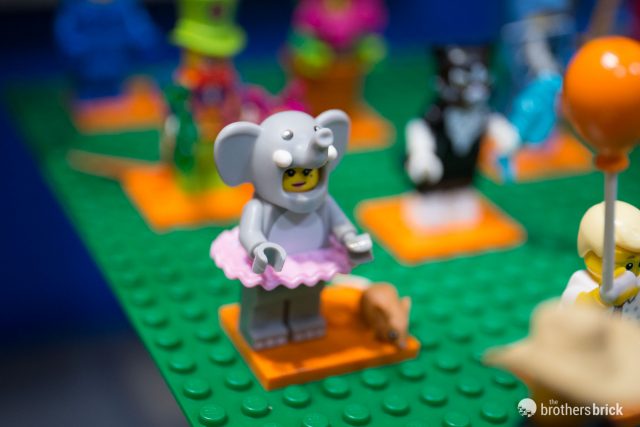 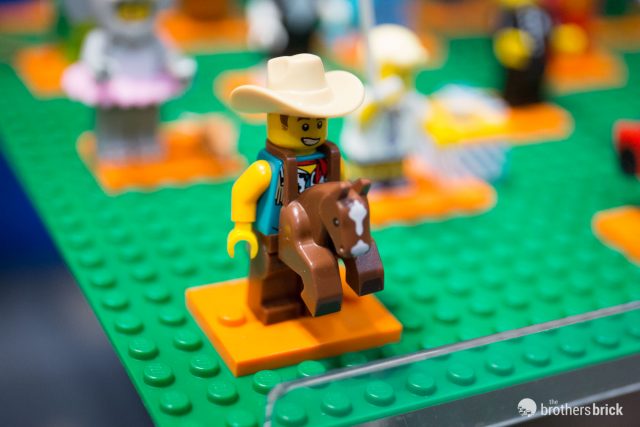 Cactus girl is a standout in this series, with new molded arms and even sporting a cactus-texture printed torso. Check out the video above to see it! 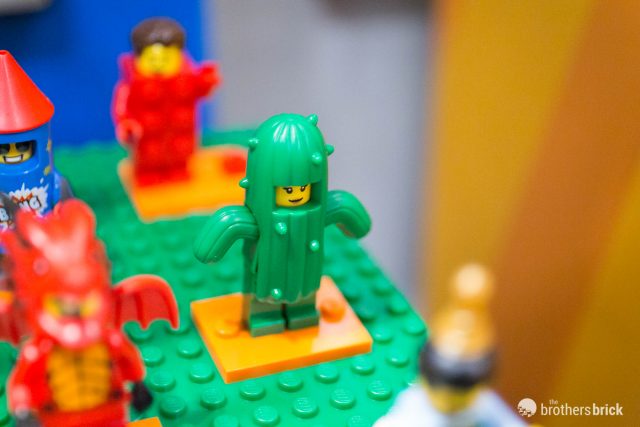 Last but not least we have Unicorn guy. He has a cheeky wink and looks like he could be heading to a pajama party instead. 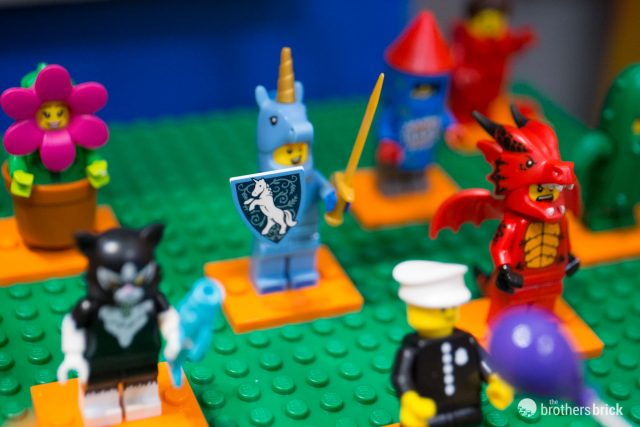