Welcome to Day 22 of our LEGO Advent Calendar countdown. Each day, we’ll reveal the three mini-builds from the LEGO City, LEGO Star Wars, and LEGO Friends 2017 advent calendars along with commentary from our team. 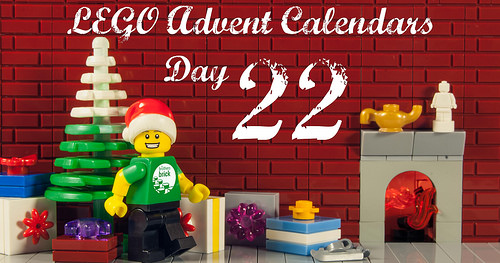 If you’re opening one (or more) of these advent calendars along with us, we’ve made sure the pictures and commentary on each day’s models will be behind a jump and posted in the evening every day, so we don’t accidentally ruin the surprise. Will we get something new for Day 22?

For Day 22, we have a snowmobile from City, a mini AT-ST Walker from Star Wars, and a black foal from Friends. 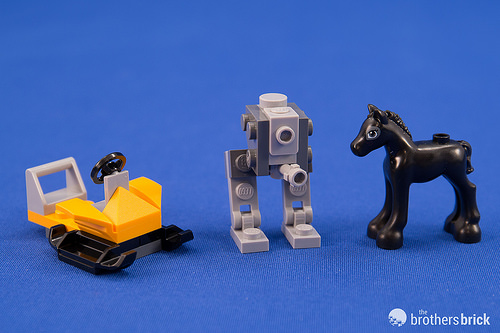 Chris: This City snowmobile is impressive for how few pieces it uses. The spoiler/bumper elements as skis is pretty ingenious. I like the AT-ST, especially the fact that the gun has limited movement to swing side to side. Finally, the pony is probably the best you could hope for from another single-element day in Friends. This time, though, it didn’t even come in a polybag. It was just rattling around loose.

Dave: The snowmobile is a great little build, with a few newish colored pieces. The bright light orange mudguard has only been available in the City Jungle Explorer sets. The AT-ST Walker is a fun little build too, though this is  a cyclops variant as the actual Walker has two little windows that look like eyes on the front of the main hull. The sleek black foal is another non-building day for Friends and doesn’t even get its own plastic bag, but it feels like a significant step up for an animals-themed calendar. The foal has only been available once before in the Foal’s Washing Station from last year.

Luka: Very cute colours on the City snowmobile build. Star Wars has useful pieces and a recognizable AT-ST Walker shape as always. And Friends… well, if I were the target audience, I would be jumping with joy — but I am not.

Daniel: It is fun to see the spoiler used in new ways. Also, the Star Wars AT-ST with those new 2×2 wedge plates is spot on!

Alexander: The Star Wars AT-ST looks dope! It’s amazing that you can build such a tiny model in so many ways. And the City snowmobile is pretty clever, too. The bright orange colour is a very nice choice. 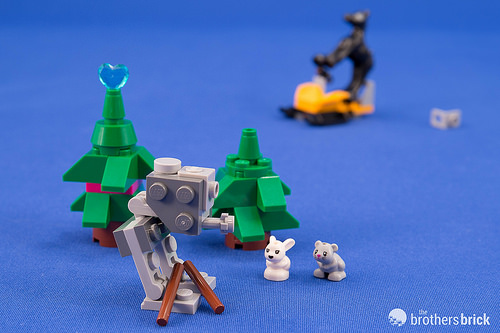 Chris: Tiny forest creatures team up defeat the mighty Empire! I am far too proud of this one. (And pay no mind to the nonsense in the background.)

Dave: This multi-day mashup was so much fun to put together. Probably my favorite of the entire series. How could we resist?

Edwinder: I’m can ONLY pay attention to the background! Looks like horse needed more power, so now we officially have a 151 horse-powered horse! Wheeee!!!

Daniel: Just how did those tiny critters lift those logs? Looks like horse earned his fun time!

Alexander: Little pony is having the time of his life with that tiny snowmobile! So much playability for a single-piece animal

Luka: Wait, bunnies and rats or Ewoks? Whatever it is, the Empire seems to have problems with the most diminutive of enemies. The only animal not fighting for freedom is the pony. For shame.