Welcome to Day 21 of our LEGO Advent Calendar countdown. Each day, we’ll reveal the three mini-builds from the LEGO City, LEGO Star Wars, and LEGO Friends 2017 advent calendars along with commentary from our team. 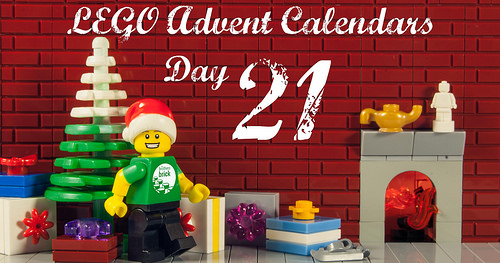 If you’re opening one (or more) of these advent calendars along with us, we’ve made sure the pictures and commentary on each day’s models will be behind a jump and posted in the evening every day, so we don’t accidentally ruin the surprise. Will we have fun on Day 21?

For Day 21, we have an ice sculpture from City, an Imperial Ground Crew minifigure from Star Wars, and several presents from Friends. 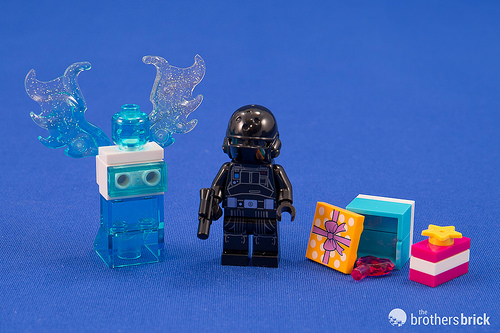 Chris: The City ice sculpture is quite awesome, though I really, really wish it was completely transparent without the white elements. The Imperial Ground Crew figure is pretty awesome, and in the true Star Wars tradition of naming background characters, he’s actually identified as Technician Kent Deezling. Lastly, Friends seems to be getting its act together a bit more with these past few days, and these little presents are quite nice. The fact that the larger one actually opens is impressive.

Dave: The ice sculpture from City is a great addition in combination with the buzzsaw wielding JungleJack from yesterday. This is the first time an advent calendar has had an ice sculpture, so I hope it becomes a tradition! Those wing pieces haven’t been in too many sets either (primarily Frozen sets, unsurprisingly). The Imperial Ground Crew minifig has only appeared once before in the TIE Striker set (though it came close with Jyn in disguise in the Battle on Scarif set). The Friends presents are a welcome addition to go under yesterday’s tree, especially since they aren’t a repetitive sled or stand build!

Edwinder: Kent is elated that this year the Galactic Empire will be distributing standard issue gifts to all employees. The past couple of years, business wasn’t booming with all the Rebel conflicts. Together with the gifts, Lord Vader sent a holographic greeting card, donning an angelic costume. Rumours in the changing room was that it didn’t go down too well with the troops.

Luka: The wings on the ice sculpture are majestic and the head is a cool colour, but otherwise the white segment just ruins it. I do understand why; the chemistry of translucent ABS is different from solid colours and LEGO will not make translucent clips until they invent a new, better plastic (good luck!). I like the prints on the Star Wars minifig, but as I am not a minifig kinda guy anyways, it does not mean much for me. The Friends gift box is cute, with useful pieces and a very playable design that I may just adopt for some personal use.

Daniel: I love the wings on the sculpture but man, that body is clunky. Why not use trans clear headlight bricks? The Star Wars crewman is cool. It is always nice to get support characters for your next large diorama. And I am totally using that trick with the gift box! 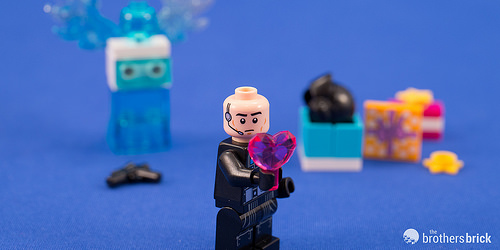 Chris: Kent is a kind person with a good heart. That’s why he became non-combat ground crew, instead of joining the Stormtroopers. Well, he was before Jyn assaulted him, stole his uniform, and then got everyone killed by the Death Star…

Dave: The icy cherub froze Kent’s heart after it was broken by his friends, though his forlorn expression would never again change. “Next time will be different,” he thought to himself purposefully, resolved that there wouldn’t, in fact, be a next time.

Edwinder: Kent wasn’t quite sure what his superiors wanted him to do with his gift — a heart shaped popsicle.

Luka: He offered his arms and armour to the ice god in the name of love.