Welcome to Day 20 of our LEGO Advent Calendar countdown. Each day, we’ll reveal the three mini-builds from the LEGO City, LEGO Star Wars, and LEGO Friends 2017 advent calendars along with commentary from our team. 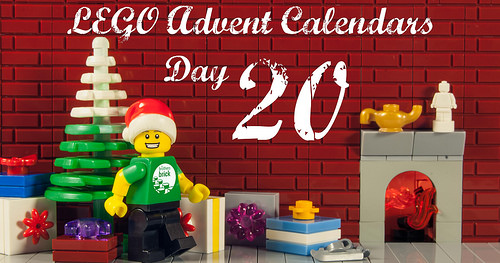 If you’re opening one (or more) of these advent calendars along with us, we’ve made sure the pictures and commentary on each day’s models will be behind a jump and posted in the evening every day, so we don’t accidentally ruin the surprise. Will Day 20 give us plenty?

For Day 20, we jungle lumberjack from City, a mini Imperial Hovertank from Star Wars, and a Christmas tree from Friends. 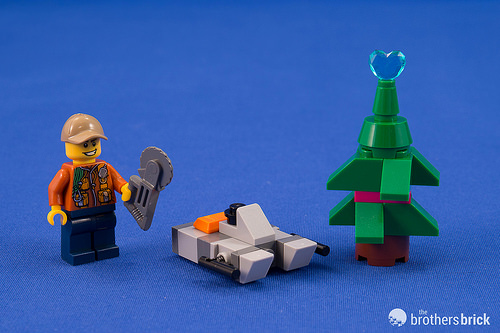 Chris: Hey, this is a solid day. A nice lumberjack for City (though a chainsaw would make more sense than a circular saw), a cool Imperial Assault Tank (though whether it’s the hover version or not is a mystery). And hey, what’s this? A pretty decent Friends model. I’m not sold on the magenta waistline on the tree, but otherwise it’s not a bad model. I like the green droid dome, and I suppose a trans light blue heart works well enough for a tree topper.

Dave: A great day on all fronts! The City jungle lumberjack (I’m calling him JungleJack) is lifted straight from the recent City Jungle Explorers theme. The Star Wars hovertank, featured in Rogue One, is a great mini build of 75152 Imperial Assault Hovertank, and that orange ingot piece is fairly rare, having come previously in Ninjago City. The Friends tree works well and even features a brand new part coloring, the green 2×2 truncated cone. What an exciting day!

Elspeth: The lumberjack minifig harvesting Christmas trees for the City is a winner in my book. And oooo, an orange ingot in the Star Wars build, yes please ! But why is there a magenta bit in the middle of the tree? Makes it look like the Friends tree has an injury courtesy of the lumberjack.

Edwinder: Sang to the tune of Jack and Jill: Jack and Tank went up the hill to chop a tree for Christmas… (to be continued)

Luka: Cool minifig in the City calendar, although not particularly wintery-looking. Brown or dark grey-coloured hands would do a great difference showing some gloves. Very cool pieces in the Star Wars build as always and the Friends tree actually has some nice pieces and does not look too bad for what it is.

Daniel: This is a very nice hover tank model, and the Friends tree would be a nice match for the City tree earlier. But I’m not thrilled with the angled dome bit because it looks awkward to me. 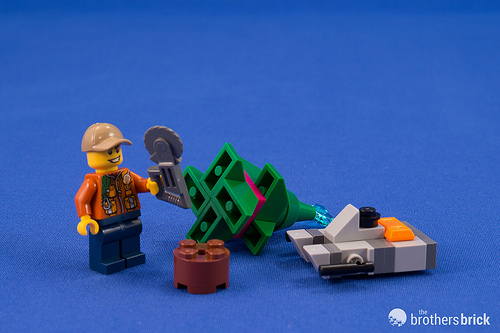 Chris: You knew this was inevitable.

Dave: JungleJack gleefully sliced through the trunk of the tree to add it to his collection of dead and decorated evergreen tree corpses at his Imperial base home, all to celebrate the holiday season. What a monster!

Elspeth: Hmmm, I would have sawn the tree at the magenta…

Luka: Chop the tree down and drive it away on the little hovercraft.