Welcome to Day 23 of our LEGO Advent Calendar countdown. Each day, we’ll reveal the three mini-builds from the LEGO City, LEGO Star Wars, and LEGO Friends 2017 advent calendars along with commentary from our team. 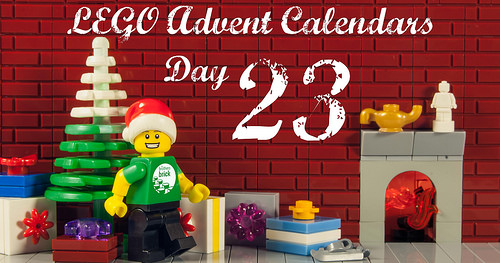 If you’re opening one (or more) of these advent calendars along with us, we’ve made sure the pictures and commentary on each day’s models will be behind a jump and posted in the evening every day, so we don’t accidentally ruin the surprise. What holiday glee will we gain from Day 23?

For Day 23, we have a red sled from City, a sled with booster engines from Star Wars, and yellow sled from Friends. 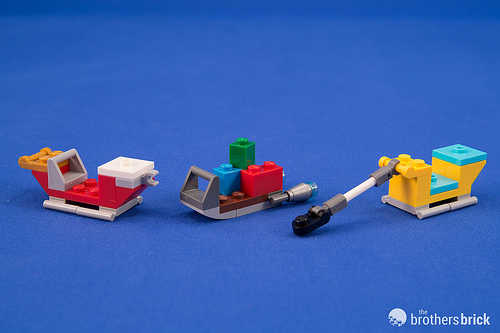 Chris: It’s sled day at the gym. There’s a sled for City, a hover sled for Star Wars, and yet another sled for Friends. In a turnabout, however, the Star Wars hover sled is probably the lamest one here, despite being the only one to include gifts.

Dave: You call three bricks gifts? They don’t even have bows! And the City sled could have at least included a husky dog to accompany it, though I guess animals have been more of a Friends thing this year. I’m excited to say it, but Friends has the best sled of the day… possibly because they have been practicing with so many other sleds this calendar!

Edwinder: Wait a minute, I know what the folks at Billund are up to. Trickery! Aren’t these three different things? One is a sled, the other is a sleigh, and the one in middle is definitely a sledge!

Luka: Interesting, the best construction seems to go to Friends for a change, although it is really close on all of them.

Daniel: It looks like the hauling capacity on all three sleds will leave many kids disappointed. But Friends wins this contest in my book with the inclusion of some cool elements.

Alexander: Chris, what do you mean, a hover sled? I don’t see no hovering here! 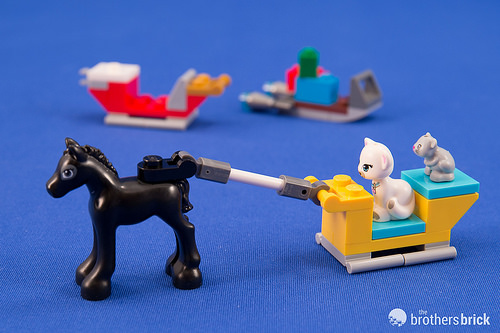 Chris: The Friends sled is pulled by the pony. I’ll allow it.

Dave: Those sleds in the back are double parked. Don’t they know that is a sNOw parking area? They should be careful or they might get mistle-TOWED. (Hehehe, I crack myself up sometimes.)

Chris: Oh, are we doing puns now? Because the mere PRESENTS of my puns will SLEIGH you. Ok, enough horsing around now…

Edwinder: I wonder what the cat did to make the horse to do its bidding. Or wait a minute, what did the mouse do to the cat? Who’s the boss?

Daniel: Is Friends the only team to plan who pulls the sled? I guess the Star Wars sled is powered independently, and the lumberjack or Grandma can pull the City sled in a pinch.

Matthew: I hope that sled doesn’t travel over any bumpy terrain! Quite the rigid tow rope, to say the least.