Welcome to Day 24, the last day of our LEGO Advent Calendar countdown. Each day, we’ve revealed the three mini-builds from the LEGO City, LEGO Star Wars, and LEGO Friends 2017 advent calendars along with commentary from our team. 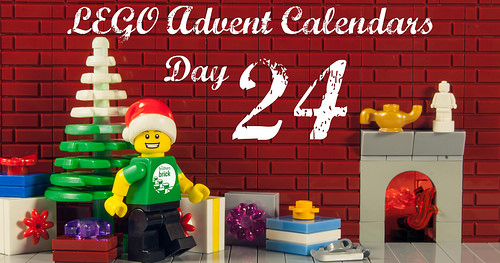 If you’re opening one (or more) of these advent calendars along with us, we’ve made sure the pictures and commentary on each day’s models will be behind a jump and posted in the evening every day, so we don’t accidentally ruin the surprise. What will we score for Day 24, the final day?

For Day 24, we have a Santa minifigure from City, a BB-8 minifigure in a Santa hat on a snowboard from Star Wars, and a snowman wearing a Santa hat from Friends. 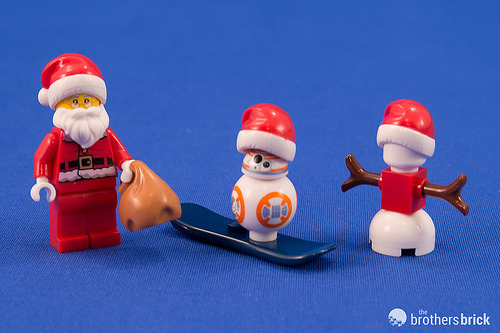 Chris: Ho Ho Ho! For City, I’m just still glad that LEGO finally caved in a few years ago and made a proper Santa hat so we could all stop using the Pirate rag. Star Wars is a big disappointment. A Santa hat on BB-8 was the best they could come up with, after previous years had a white Chewbacca wearing Christmas lights and a specially printed R2-D2 snowman? I mean, BB-8 is practically a snowman shape already, so a special print would have been perfect. They missed a great opportunity here. And the Friends snowman is… functional? Not exactly inspiring.

Dave: City steals the show on the last day with a BRAND NEW torso print for Santa! The white trim is more fluffy and shaded than his previous torso, and he now has a cute candy cane carefully tucked away in his back belt. Even his face is new, donning spiffy specs (the head has only appeared once before in the Fun at the Beach set). Now that is the way to cap off an advent calendar!

For Star Wars… really LEGO? Nothing exclusive at all? You could have made BB-8 into a proper snowman with a top hat, printed him in red and green and made him into an ornament, molded him out of pearl silver and called him a jingle bell, or even made him out of reddish-brown printed with white details and called him ginger-BBread-8. The only redeeming factor for today is that dark blue snowboard has only ever appeared in the re-release of the Winter Toy Shop. What a disappointing finish for an otherwise stellar Star Wars advent calendar.

And Friends… my dear friends. Have you ever seen a snowman before? I don’t think you have. I hope that this is an attempt to put him in a red sweater or something, but as far as leaving you fulfilled on the last day of the advent calendar, Friends is at least consistent in its overall disappointment.

Elspeth: City Santa is great with his candy cane and cute little glasses on the minifig head. I guess this is a cheap way to get a BB-8 and some accessories for Star Wars fans. The Friends snowman would be worse if it had 1×1 cones for arms (oh wait, that happened on Day 11).

Edwinder: Ok, for once I’m going to speak about what these builds really mean to me. Santa is predictable, we all gotta’ have the bearded guy or else it wouldn’t be Christmas. But as Elspeth has pointed out, those glasses look cute! Score! For BB-8, I’ve got to echo Chris’ sentiments. It’s such a wasted opportunity. Donning a cap and calling it a day? Not acceptable. The Friend’s snowman does it for me, looking somewhat better than the previous one.

Luka: Friends, as well as Star Wars, are disappointments, although here we see that obviously LEGO almost knows how a snowman should actually look like (though they are seldom red). The print on City Santa is great, especially the face with the glasses and new torso.

Daniel: Is that BB-8 hat just perched on with a stud? Lame. I do like the dark blue snowboard, though. I also love the glasses and torso on the City Santa. I’m not impressed at all with that Friends snowman, but I guess it’s always good to get a few more twigs for microscale trees.

Matthew: The Friends snowman looks like it has a torso made from a gas can and arms as thick as tree trunks. An interesting look for sure! 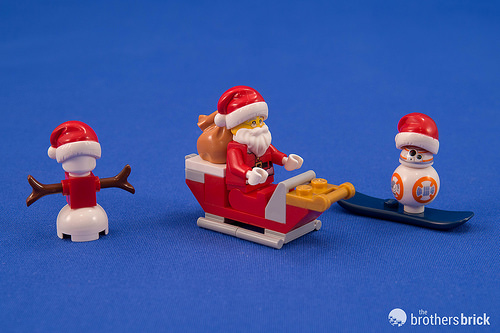 Chris: Here’s Santa on his sleigh, with his bag of toys. Ya, we were out of ideas.

Dave: I now see this as a missed opportunity to put both BB-8 and the snowman on sleds too or have Santa building a BB-8 super snowman (hangs head in shame).

Elspeth: “Last one to the pub buys the drinks,” shouts Santa as he slides off into the distance. The poor Friends snowman looks sad once more.

Edwinder: I’m going to take up Elspeth’s challenge and beat Dave and Chris to the pub because the snowman ain’t moving, Santa’s missing his reindeers, and by the time BB-8 reaches the foot of the hill, he’ll be balled up in such a huge gargantuan snowball that he won’t be able to get out of it!

Daniel: Santa is all dressed up with nowhere to go. That sleigh needs power! I’m picturing some huge rocket boosters like in Rise of the Guardians. Or maybe his sled is pulled by invisible Thestrals?

Luka: Day 24 bags are so boring that even the “fun” photo is just a slight rearrangement of the normal picture.

Matthew: I hope Santa is wearing well-insulated pants. His sleigh certainly isn’t going to be protecting his legs much. Plus, careful where you sit with that candy cane in your back pocket!

Chris: Here’s all the snowmen. Yes, we included the Friends coat rack thingy and the ice sculpture and BB-8 anyway.

Dave: We wanted to take a quick look back at all the builds in aggregate to see if we can spot any trends. One popped out loud and clear: LEGO needs to build a better snowman.

Edwinder: If this were a police lineup for swindling snowmen, it wouldn’t be too difficult to point out the culprit. You couldn’t mistake one for another, as these are all so unique. That being said, I think the only one I can appreciate as being even close to a snowman is BB-8.

Daniel: BB-8 for the win! Now, if only they had printed a festive scarf.

Alexander: BB-8 snowman is the most adorable one! All thanks to that Santa hat.

Chris: Finally, here’s all the minifigures and creatures from each of the calendars. Surely I’m not alone in thinking that Friends got the short end of the stick, because a tiny animal is not equivalent to a minifig in my book.

Dave: For many of us LEGO fans, the mini-build pieces from these advent calendars get incorporated into our parts collections leaving only the minifigures to really speak to the overall holiday theme. Star Wars got eight minifigs (Unkar’s Thug was hiding for this picture) with one exclusive print on the Imperial Officer (and surprisingly not on BB-8). City got six minifigs with a brand new Santa. And Friends got one new mini-doll and seven various animals (none of which are unique to the Advent Calendar). While the play value is decent with each, I still can’t help but feel that the comparison is slanted in favor of Star Wars and City this year.

Daniel: That Friends girl really could have used a friend.

Luka: Friends seems lackluster. City has some great minifigs there, but the generic kid is blocking some of the detail, so it isn’t obvious. And there is no need to lose words about Star Wars, as we all know LEGO puts a lot of thought into their designs and inclusion choices.

Edwinder: Let’s be honest, some of us buy the Star Wars advent calendar just for the minifigs–I know I do. This year, the iconic “festive figbait” isn’t there and does not do it for me. I’ve never paid much attention to the Friends advent, but if I needed little critters (which do seem quite cute and appealing) I’d like this year’s calendar. However for City, as much as I love Grandma Willis’ cookies, I simply have no reason to acquire these. That being said, all the minifigs together look lovely in this scene. I’ll be looking forward to this again in 341 days to come!

Well, there you have it folks, our countdown reviews of the 2017 LEGO advent calendars have come to a close. We hope you had as much fun with our side-by-side comparisons and mashups as we did making them for you. Join us again next year for more advent calendar fun, and have yourselves a very merry Christmas and a happy New Year from all of your friends at The Brothers Brick!

The 2017 LEGO Advent Calendars can be purchased from the following sites: