The Disney+ exclusive TV show The Mandalorian just debuted, so we’re taking a look at the single LEGO Star Wars set released to support the show so far. Although the TV show didn’t debut until November 12th, 75254 AT-ST Raider was released alongside the first wave of LEGO Star Wars sets from The Rise of Skywalker at the beginning of October. The set includes 540 pieces with four minifigures and retails for $49.99 US | $69.99 CAN | £49.99 UK (it’s also available at 20% off from Amazon.com right now as well). 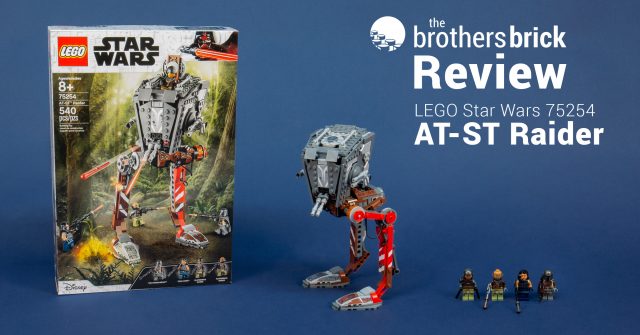 This latest AT-ST is one in a long line of “chicken walkers” that LEGO has released, following up on the 75153 AT-ST Walker from Rogue One released in 2016. Of course, that doesn’t count the utterly awful half-walker pawned off on LEGO Star Wars fans in the form of 75201 First Order AT-ST (arguably the worst LEGO Star Wars set ever).

Note about spoilers: Unlike the abominable First Order AT-ST released well in advance of The Last Jedi, this LEGO Star Wars AT-ST does not reveal any spoilers about the TV show. Out of respect for readers who have not yet seen the show (or can’t due to regional release differences), this review of the set will also avoid spoilers. We ask that commenters respect each other and do the same.