Anyone following Carl Greatrix on Flickr will have noticed he has recently been posting pictures of his builds for the LEGO Indiana Jones 2 game created by TT Games. These offer a fascinating insight into the special job of building LEGO models for games. We’d like to thank Carl and his employers for talking to us about his job.

TBB: How did you get the job and how long have you had it?

After seeing the ad on TBB, I decided to send my CV in for consideration. I had not ever anticipated leaving my own business, but being a Lego model designer has always been a secret dream so the temptation to at least give it a shot was too much to resist.

I was contacted to be told I had made the final list of succesful applicants for consideration and we were then tasked with two building challenges from brief. One mechanical and one organic. I was succesful with both and got offered the position after interview, I have now been there almost a year.

TBB: What advice would you give to others in this regard?

I would say to always try and improve your own models in any way you can and keep uploading images of the work that you are pleased with. Anyone unsure of their own standards should keep going. Focus on something you are passionate about and keep building it, looking at all the aspects you love about the theme you are building and try to recreate those as best you can, the missing parts usually then become obvious and fall into place.

I have always got a great deal of inspiration from looking at other peoples builds since I can remember. The more builds uploaded, the higher the bar gets raised. Our artists and designers certainly look through Flickr and Brickshelf for inspiration, so any work posted up will almost certainly get you noticed one day somewhere. Who knows, it may lead to someone getting their dream job also! 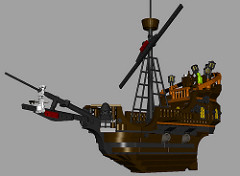 Getting the job and having a life change due to it! If you mean build wise, yes, I have been building models that as an AFOL I would never have attempted or even thought of! The imaginations of some of our game designers will never cease to amaze me or bring a smile to my face!

TBB: What does your day to day job entail?

It can be extremely different from day to day so there is no real answer to
that.

To try and explain it as simply as I can, anything from 1 day to 3 weeks can be spent designing a specific model in the brick. It is then sent of for approval by TLG and associated film licence holders. Once/if that is granted I have to digitally build it and do all the technical applications asscoiated with getting it into game, making sure it works correctly in test scenes, etc. The model will then get passed over to animators, cut scene animators and level designers and artsists for them to use how they see fit within game levels.

TBB: How different is that to your hobby building? 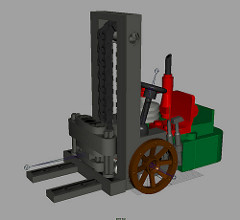 Building as an AFOL can be quite different. The builds for in game have certain requirements that need to be met that usually wont be obvious upon inital viewing of them as a static model. Even the smallest version of a vehicle still needs a minimum of a 2 stud space internally for at least a minifig torso and head to fit, we will always do our best to fit a complete figure inside but sometimes it is just not possible. As our games are 2 player based, any vehicle also often requires space for 2 minifigs.

Vehicles usually require working doors and hatches, often boot lids and bonnets also with interior details such as engines or boot space large enough for certain objects to fit within them. This all makes the builds even more challenging.

If I were to build a vehicle for myself, I would not need to have all these features and concentrate instead on the correct look and feel of it. Most builders will understand that by concentrating on a correct external look often requires valuable interior space to be used up in the construction, especially when using SNOT techniques.

Planes need working undercarriage, cockpit space, wing flaps if possible, etc. Organic builds for creatures, etc if building as an AFOL, some lovely builds can be produced. When it comes to a game version, its a different story again as limbs require articulation for animation, that starts to get really challenging when its down at minifg scale. Most organic builds I get tasked with, I initially think ooo, I can do a great version of this or that, then I hear what requirements are needed and my heart sinks as I know that the articulation will make my first thoughts impossible to produce.

TBB: Are there any really special requirements?

Creativity first and foremost, being artistic is also a huge help. Plus we need an understanding of all the technical applications even if they are not part of our own job position.

TBB: What different parties do you have to collaborate/compromise with in order work toward the final product?

Lego set designers and any associated film licence holders (i.e. Lucasarts for Indy2) have to approve the models and designs we build before they can appear in game.This is handled by the “powers that be” above us, the only time we get involved is if we have to take photographs of certain connections to show how they are being made.

TBB: What is the most frustrating aspect of the whole proccess?

Definitely complete vehicles being dropped from game. Its an unfortunate aspect to the industry, sometimes they may be dropped due to complete levels being changed or deleted, or simply not enough time to include them where intended. Some of my favourite models have been dropped and I cant make them public in case we ever require them for some other game.

TBB: Please talk us through the creation of a game model. 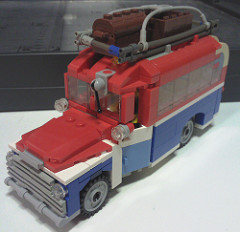 Okay, I work from a design brief, this can be anything from being told we just need a generic type of vehicle as a bit of a fun ride-a-round and have pretty much free reign with it, to a specific vehicle that has to fit certain dimensions in game, has lots of requirements for working features, I’ll get to see the level that it will appear in, the colours of the backgrounds, etc which all helps to give me more vision and a “feel” for what I need to be building.

Next step is researching the real object, for some we have studio model pictures from the film companies which are a big help. Others it may be only a couple of freeze frames from film, whilst others will be photographs found by searching the internet.

All the time I am searching I’m starting to think of ways to build in brick. Once I’m happy with the references I have, then I get to work with the bricks, designing and building in the same way that I would for myself other than I really only need to build half of the model.

You may notice in some of my real brick photographs that only one side is completed, this is just to help me when I then come to build it digitally. Being able to view it from the unbuilt side is a great help for speed and lessens the need for it to be pulled apart to see how I built a certain section. (I forget quite quickly with so many models being built!)

From initial brief to being built digitally is roughly 1/3rd of the time spent to getting it working correctly in game. Whilst it may look like I spend my life building Lego, actually 2/3rds of the time is taken up by the technical aspects of the game industry.

TBB: Does your work source parts for the physical models through BrickLink, or do they have an unlimited supply of bricks from LEGO?

I wish we did have an unlimited supply from Lego! ;) We have duplicate sets, 1 of each is on display around the 4 floors of our office building, the others like any self respecting Lego builder, are broken up for parts. I also ordered most parts available in black and grey, just to improve the range of what we had and to include parts I knew I would be using a lot of. This at least allows a more uniformed brick build when we are against deadlines. Now we have the models built in game, we may start looking into Bricklink orders to obtain rarer part / colour combinations to allow the brick builds to be built in colours closest to the colours they appear in game, for display around the office. I have just finalised a further parts order with TLG for all colours / parts.

TBB: How do you keep the design straight without using the right colours?

Usually just by viewing photographs of the real subject that I am working from. Due to time, I will usually just grab whatever parts are closest to hand regardless of colour. If a build does start getting out of hand, I’ll put some wild colours within it as “place holders” to make me aware a colour change should be happening at those points.

Once I then start to build it digitally, I’ll experiment a little further with certain Lego colour palettes as sometimes what I have envisioned in my head colourwise for the build, does not always portray well on screen.