Merry Christmas, everyone! Hopefully today is one of the best days of 2020 and that you unwrapped several LEGO sets from under the tree.

We wanted to share a few more insights into this year’s LEGO advent calendars before the holiday season ended. These include leftover parts, minifigure collections and scenic displays that you can make with your advent calendar. Let’s jump in, shall we? 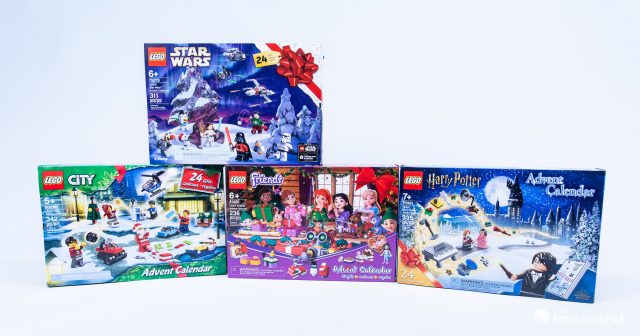 The Harry Potter Advent Calendar was a huge success this year. With characters and individual builds being part of the Yule Ball segment from Harry Potter and the Goblet of Fire, it stood out as LEGO taking a new direction for its advent calendars. As our esteemed panelists below can tell you, we hope to see more comprehensive advent calendars like this one in the future. 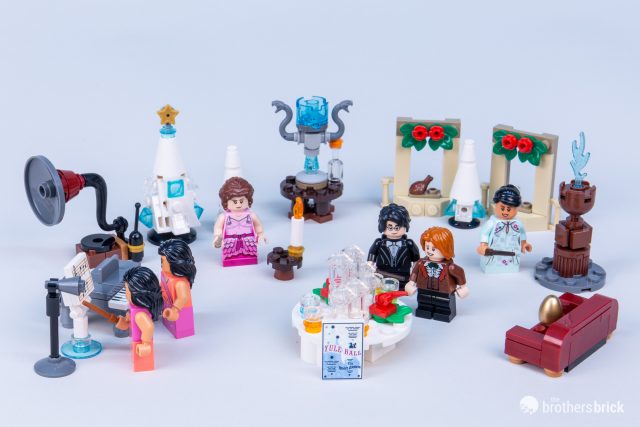 Adam: I’d go to this party! But seriously, what a clever idea to make this year’s Harry Potter theme be a scene from the Yule Ball.

Chris: Agreed, the Harry Potter Advent Calendar is the standard against which others should be judged. I love how this advent calendar isn’t simply a series of cool microbuilds, but actually, most of the builds come together to build a scene. Imagine a Star Wars calendar that built a cantina? The builds are pretty much all top-notch, too, even if a couple of them are a little boring as standalone.

Adam: Or a Star Wars build based on the Ewok village celebration at the end of Return of the Jedi.

The Harry Potter calendar minifigures themselves were a hit. New designs for every character, plus a few new ones. 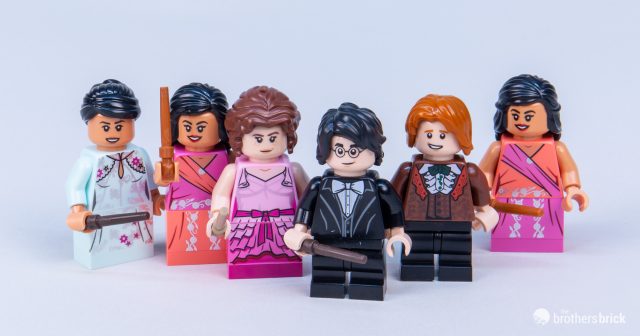 Chris: This alone ought to sell the Harry Potter calendars. This is a brilliant lineup of figures, with fun new outfits even for figures like Harry and Ron that everyone’s already got a million of.

Jasmine: Also, of all the Harry Potter set waves we’ve had, this is the first time we get Padma and Parvati Patil minifigures. Their inclusion is pretty sweet, in addition to the exclusive outfits for all of the figs.

Adam: So many little legs!

Moving on to Star Wars! We had a blast opening these. From minifigures to microfighters, this year was another proton torpedo in the exhaust port (or a slam dunk, whatever your metaphor of choice is). Our panelists did have a few suggestions, however. 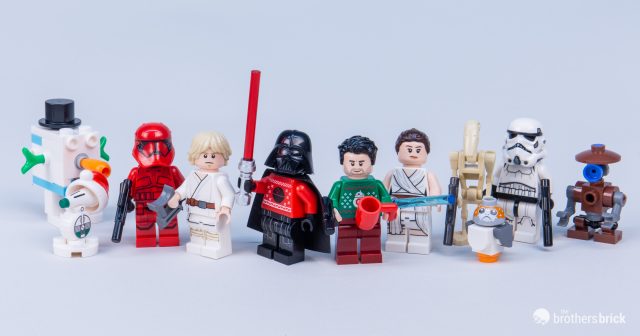 Ed: Advent Calendars are binary for me, I buy them or I don’t. Here’s how it works. Not Star Wars, zero percent chance of a purchase. Star Wars? Depends only on 1 thing. Is there any worthwhile minifigure that’s unique? This year it’s an easy decision of a MUST-BUY simply for that Darth Vader piece. As much as I hate it, gives me a reason to pick up an Advent Calendar from time to time.

Adam: I’ll commiserate with that, Ed. I have a Darth Vader body from a bulk buy, but no helmet. This is the first time I have the whole figure.

Chris: Star Wars ought to take a cue from Harry Potter and include more exclusive figures, or at least exclusive designs. Still, the two holiday sweaters are pretty great for adding some humor to your dioramas. 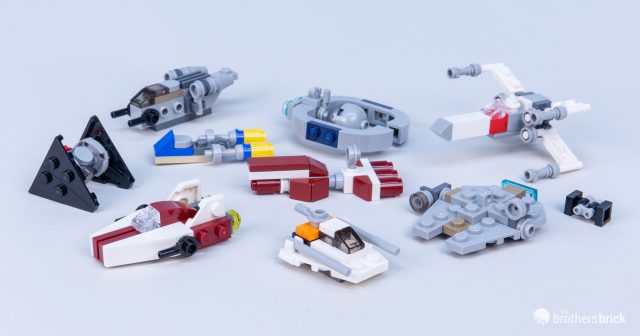 Ed: You had me at “X-Wing.” You complete me at “Razor Crest.” I wish I knew how to quit you “Star Wars Vehicles!” I’m just an AFOL, standing in front of LEGOS (trigger alert!), asking them to stop tempting me.

Chris: This is a great lineup of ships. I kind of wish they were all in the same scale, but I know that’s asking a bit much especially because there are some capital ships. Ultimately, I’d say I’m pretty happy with this spread. The tiny TIE Bomber with just 3 parts still gets me every time.

Adam: The Force is strong with these builds.

This year’s lineup of builds and figures from the City theme played along similar lines from Harry Potter’s comprehensive calendar. We enjoyed seeing groups of characters, buildings, and vehicles work together, which made storytelling very easy to do with young kids. 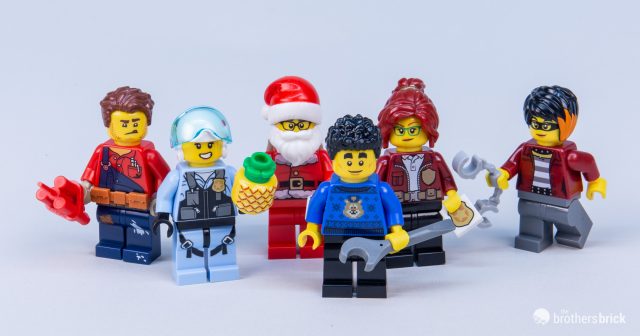 Benjamin: I think the accessories make more sense when they’re all together. They’re Secret Santa presents for the other figs. Duke has the overalls dude, so he bought a wrench. Overalls dude has convict lady, so he bought some dynamite. But she has one of the cops, maybe Rooky, so she got a nice set of handcuffs. But then Rooky has Freya, so she got a pineapple (which might make sense for those who watch the show, which I do not). Then Freya got a badge, which confused me earlier on, making me think she’s a cop when she’s really a firefighter, but it’s really a gift for Duke. It all connects!

Chris: I know we’ve talked about this in some of our other reviews, but I love how detailed regular City minifigures have become.

Adam: This is a fantastic group of minifigures. Definitely worth grabbing the City advent calendar for these and the micro vehicles. 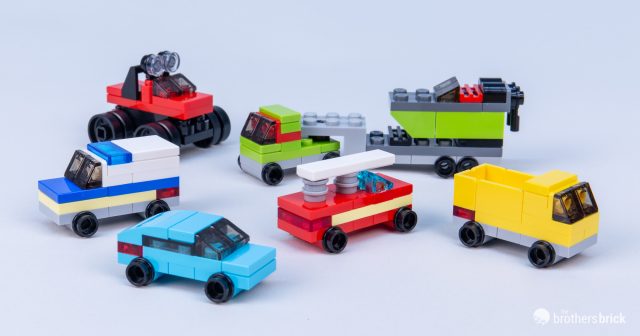 Ed: Ok, when all of these come together, I have to admit, they look pretty cool and in need of a micro-city backdrop.

Adam: Thankfully, the box came with a road system and a city backdrop.

Chris: I agree, Ed. These are much stronger together. In fact, they’re pretty adorable and it makes me want to go build a tiny city in this scale, too (it would be a little bigger than the microscale buildings in the calendar).

Bre: Yep, definitely very cute all there together. The scale is decent, though the truck hauling the boat could be a bit bigger. 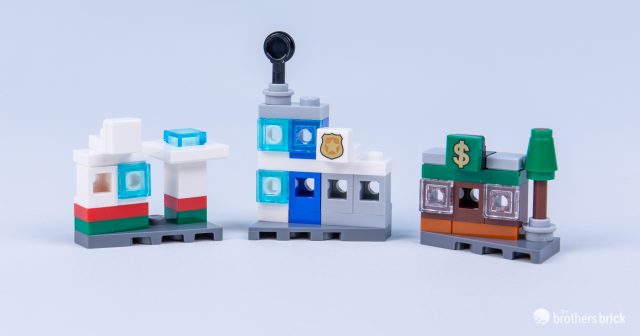 Jasmine: Looks like the modular wedge baseplate theory only works with the gas station and the bank. This is a good start of a full microscale city and there’s lots more you could add in!

Chris: The only thing that disappoints me about these is that there are only 3 of them. I want a whole city like this! LEGO should definitely do a few Gift-with-Purchase sets per year that just keep adding onto a microscale city.

When it came to the Friends Advent Calendar, our panelists found things to agree on and others that they couldn’t. It was fun to open, though a little disappointing with several of the builds and microdolls. But looking back at the end of the 24 days, we fell in love all over again. 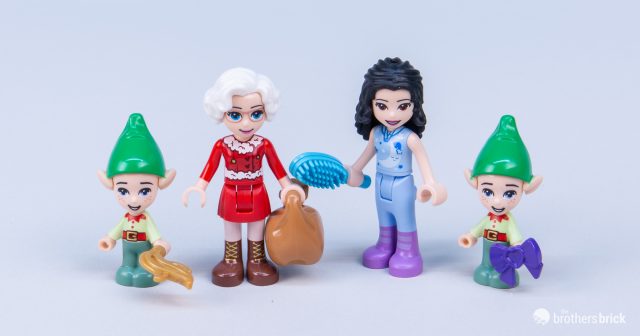 Chuck: Kind of a letdown that the elf microdolls are identical save for accessory…

Chris: While this is a huge improvement over 2019’s calendar, which had just a single minidoll, I really wish Friends calendars would include more figures. That being said, I absolutely love the elves. The microdoll bodies came out in a number of other sets first, but they make far better elves than Disney princesses. 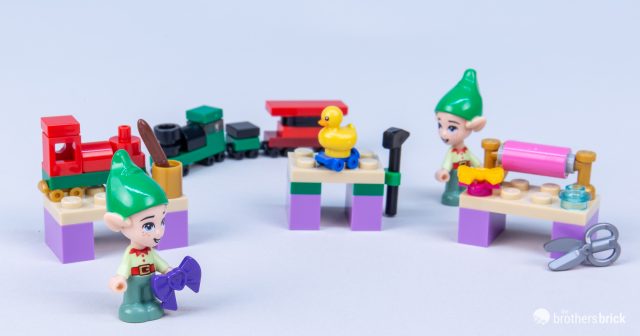 Bre: While the little elves kinda creep me out, I do think this is a pretty cute display.

Chris: I’m pretty much in love with this. This is the best thing that’s come out of a Friends advent calendar probably ever.

One element that stood out with this year’s advent calendars was the variety of Christmas trees we built. Seeing different pieces and designs used in forming our holiday forest was a fun experience. 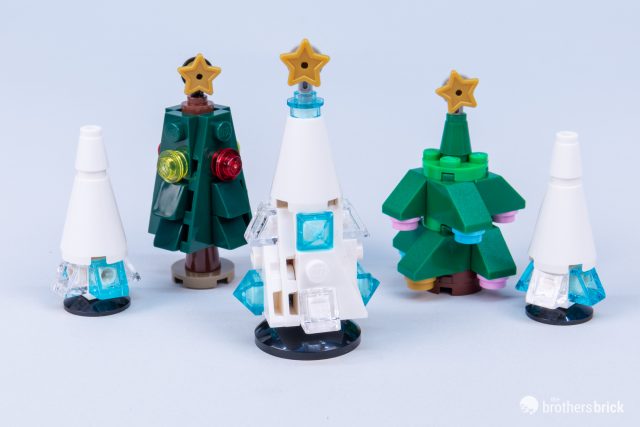 Ed: We’ll need a Guardians of the Galaxy Advent Calendar to make this collection of trees complete each year ;)

Chris: So, I have a theory. My theory is that LEGO designers have an ongoing challenge to never use the same Christmas tree or snowman design twice. I haven’t exhaustively researched this, but to the best of my recollection, repeats are very, very rare, and some of the designs feel like they’re reeeeeally stretching it (especially for the snowmen).

But the best part about opening any LEGO set is the extra pieces you find in the box. Combined, this year’s four advent calendars resulted in hundreds of spare parts that we know we’ll find a home for in future builds! 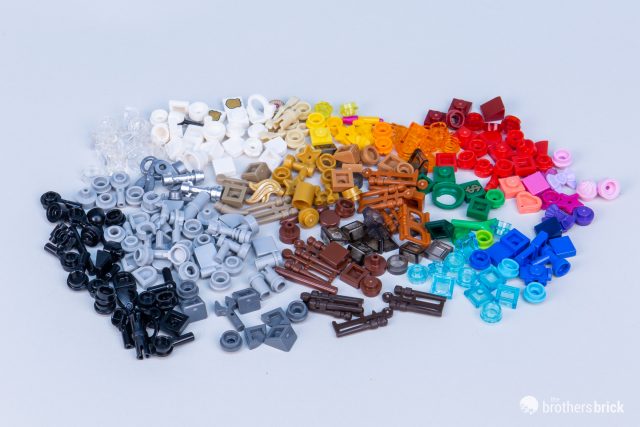 Adam: Gee, I wonder how many extra pieces I’m going to fin- OH MY GOSH!

Ed: How many Alderaan jokes do we need every year? The answer is – there’s never enough!

Bre: Look at all those wands!

Chris: Holy cow that’s a lot of spare parts just for four sets. I wonder if these sets set the record for the ratio of spare parts to official part count? Now, who can build the best MOC using only spares?

Bre: Oh yes, a build challenge with this lot would be excellent!

Thank you to all who joined us this year in opening the 2020 LEGO Advent Calendars! One of our reviewing panelists is here to leave us with some final thoughts as we head into 2021. Take it away, CJ!

CJ: Four different Advent calendars, and four very different collections of sub-sets. For Harry Potter, the “Yule Ball” theme was introduced on day one and carried well through the full month. For a licensed theme, LEGO did a great job of making things seem seasonally festive. There were great minifigures, cool micro builds, and plenty of holiday cheer. I’m not a Potter fan in general, but the great parts and pieces here made me sad I didn’t opt for this calendar for my own home.

Star Wars Advent was focused on moments and vehicles from the films, and there’s nothing wrong with that. The micro builds were all well done, and the holiday-themed minifigure variations were all exceptional. Yes, even that creepy looking Gonk Droid/Snowman thing.

City was…well, it was a City advent calendar. That meant the required inclusion of cops and robbers. not a theme that particularly makes me think of holiday good cheer.  Tying things in to the LEGO City Adventures show at least put a nice unifying sub-theme to the year’s sets. But even so, I was left cold by most of the days. The price point on this calendar was lower than on the Potter and Star Wars sets, so a side-by-side comparison may not be completely fair. But every day felt like too few parts and repetitive models. I mean…two Christmas trees? Sure, I’ll buy next years City calendar like I always do…here’s to hoping that it can be more of a win.

And Friends…ah, what a letdown. Last year’s ornament-themed calendar was a delight every single day. This year was more closely tied to the micro-doll concept and had a few nice builds. But overall it suffered from the same underwhelming feeling I got from the City calendar. Not enough parts, no real spark of wonderment. Well, at least until that M. Night Shyamalan twist at the end.

Overall? There was always a little something to enjoy every single day in at least one of the calendars. And even the slower days involved playing and building with LEGO. And I am the last person who’s going to complain about that. So Merry Christmas, everyone. Happy holidays, too. And here’s to an even better 2021.