Continuing our series of behind-the-scenes articles about LEGO Masters, we chatted with Brick Artist Nathan Sawaya in his California studio about how he built all the props for the show, what kind of deadlines he faced, and working with LEGO as a creative medium. 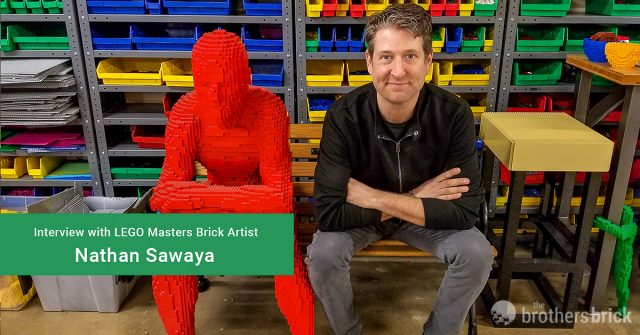 The first half of our interview (conducted jointly with Brickset) focuses on his work with LEGO Masters and serving as their “brick artist in residence.” The second half discusses his personal views on LEGO as a whole, his traveling LEGO installation “Art of the Brick,” and how he went from an NYC lawyer to an LA artist.

Thanks so much for welcoming us to your studio. This is an impressive place!

This is where I do most of my work, surrounded by about a million bricks in here. I have another nine million off-site. 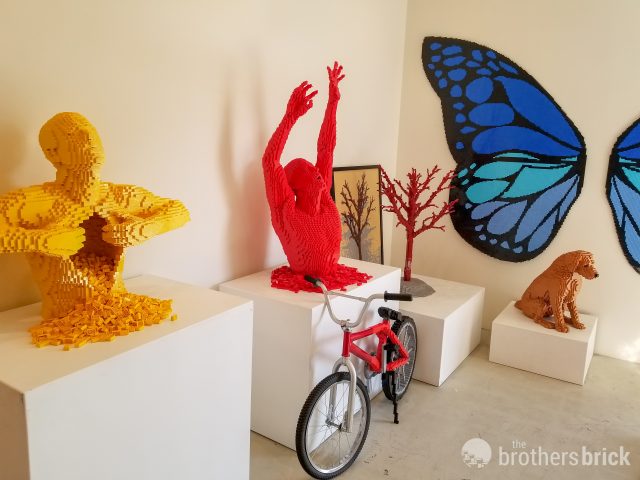 How did you get involved with LEGO Masters working as their builder in residence?

Endemol Shine the production company reached out to me about a year prior to production. They came by this studio since they’re only a couple blocks away, and we had a meeting about what the possibilities were at that point. It’s a relationship that’s been building for some time.

Did you know how many pieces you would have to build ahead of time?

There wasn’t a set number because everything was changing all the time. My official title is “Consulting Producer.” I’m just available to help out and do what I can if it’s feasible in the time constraints we have. I did know I would get to build the trophy. 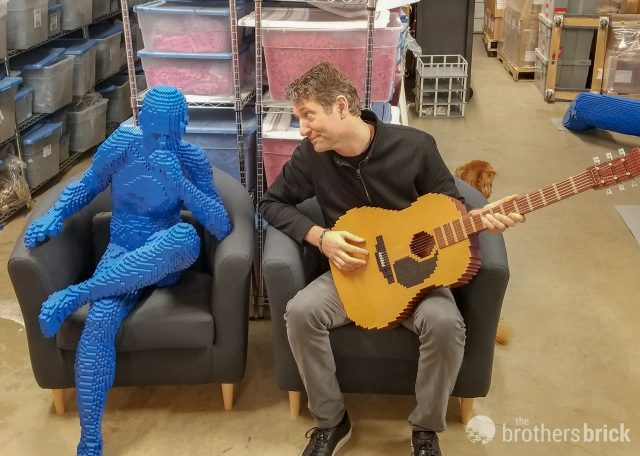 What are some of the items that you’ve put together for the show?

It depends on the episode. Different episodes have different themes. Each theme would require a core set dressing or prop –  a sculpture, or something like that – to really liven up the set. And they all would have to be built out of LEGO, of course. Then for the actual challenges, we had to build things that the contestants would sometimes use to work off of or build on top of. 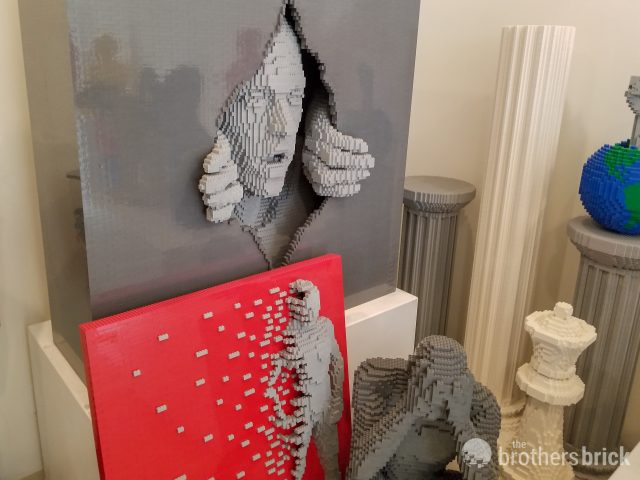 Were you involved in designing any of the challenges?

Oh yes, I had quite a few discussions with the team about the challenges. I’m close with the judge for LEGO Masters Australia Ryan McNaught, though his experience seems to be a little different from my own. This is a bigger production than some of the other countries. There are more people involved, and there was a whole team putting challenges together. There’s a lot of give and take and feedback on everything when it came to creating the final challenges. 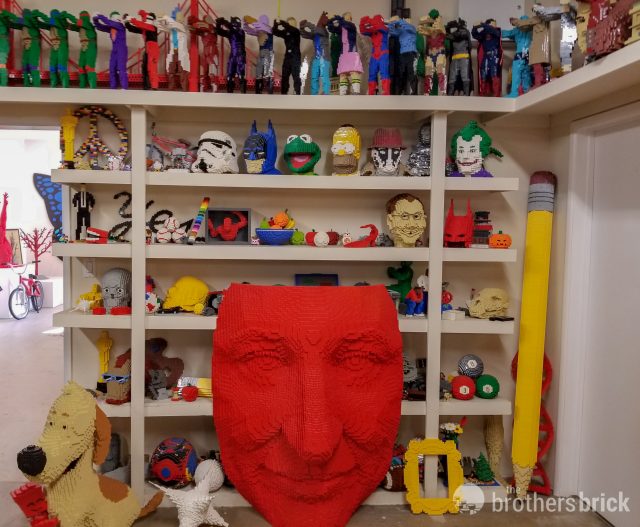 What was the most challenging thing that LEGO Masters asked you to do?

The first episode was probably the hardest because so much was coming at me in the shortest amount of time from set pieces and props to the show logo, some of which got used and some didn’t. We also created a massive display for the contestants to see as they first walk onto the set. That took up most of the space in this studio. All that was happening at the same time, and I learned really quick what I was in for. Building got a little easier as the season progressed because there are less contestants so there’s less to build. 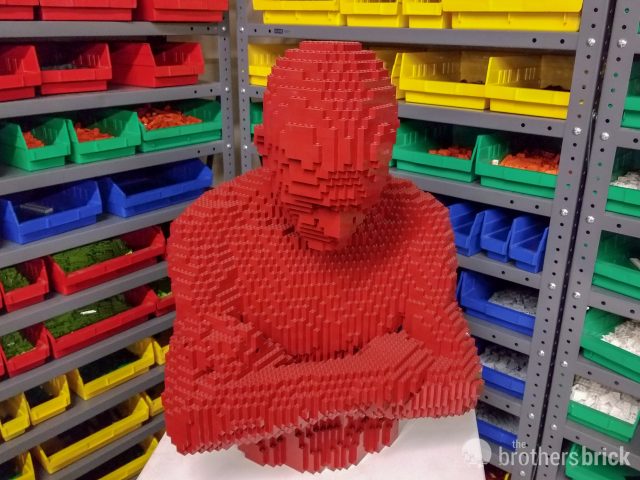 We heard people singing your praises on set, especially about the speed of turnaround.

It’s been an interesting project. It’s not my normal process. I like to take my time, but it’s television. It’s fun, it’s exciting, but it is non-stop, and the deadlines have been very, very tight. Sometimes someone gets a last-minute idea – it’s a fun idea – but then we have to figure out how we can build that ASAP because they need to use it in six hours. 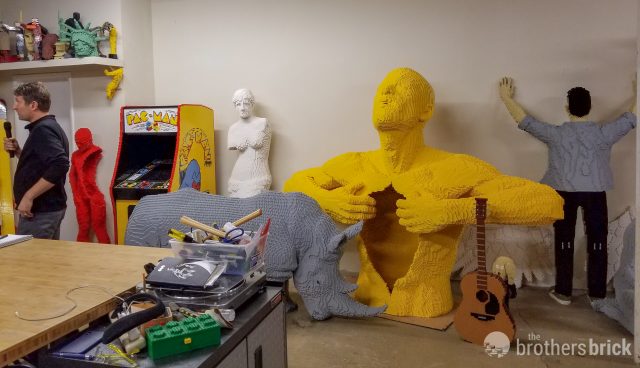 Is everything you built for the show being saved? Is it all glued?

Everything that was built for LEGO Masters is being stored, but not much of it is glued. Part of that is due to the time constraint. We’ll get a request and we have to get it to them in an hour. There’s just no time to glue. When we can glue it together, we do. My team includes Brandon Griffith and me, and sometimes I bring on some other help when we are really under the gun or need to build something really big. 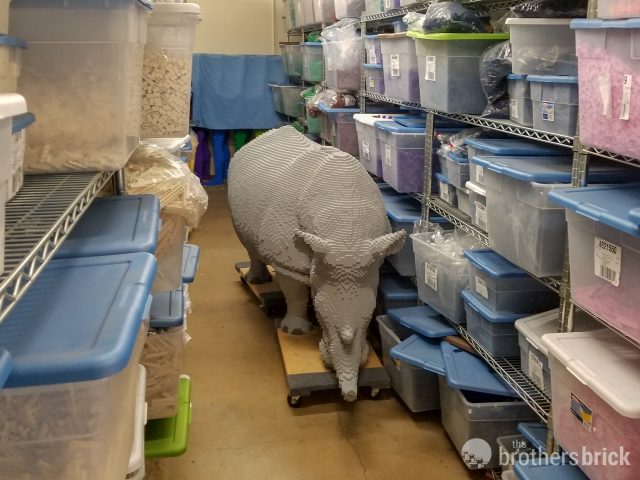 Was it difficult to transport unglued props to the set?

It’s not far from my studio to the set. But the problem isn’t the distance – it’s the stopping and turning while driving. I wasn’t transporting them myself so there was a steep learning curve with the crew driving unglued sculptures. They would pick everything up here, learn how to pack up unglued LEGO and how you transport it. That’s just part of the fun, but we thankfully had no major issues.

Will the work that you’ve done for LEGO Masters become part one of your exhibitions?

No, I don’t think so. The work that’s being used on the show will be saved for the show for any future seasons or marketing. They have brought in some other pieces that I’ve done over the years that will be part of the show. I will retain those. 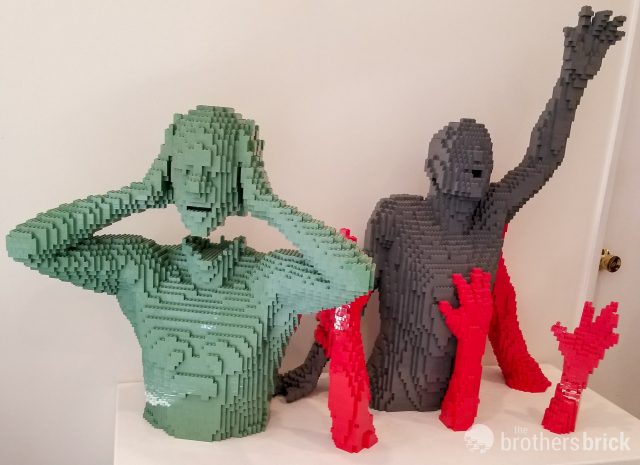 How do you think you would have fared as a contestant? Have you been tempted to jump in and try one of the challenges?

I would love to be a contestant. I mean, what fun! You can see how much fun they’re having. It’s pretty amazing. It’s been a good ride for them. I haven’t really been tempted to try the challenges because I’ve been so busy working on other builds for the show. I haven’t had any chance to really explore my own creativity for the last few months. But we’ll see what I can do when the spring hits and I have a little downtime.

Have you been able to see all the finished builds that the teams come up with?

I haven’t because I’m not always on set. I’m here in the studio working on whatever’s needed next for the next episode. What I have seen has been amazing. They’re really high-quality builds so it’s going to be fun to watch throughout the season. 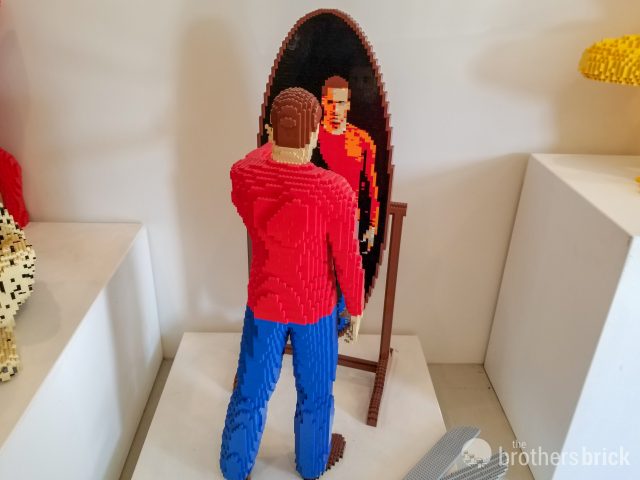 Would you do it again if there is a second season? Will you be watching the show?

Of course! I’ve only seen it from one angle, so I want to see what it looks like when it’s all put together. It’ll be a lot of fun with a lot of surprises. There’s some stuff in the show that’s never been done before. I think fans will be really amazed.

It’s been a great experience working with everyone. It was fun to connect with one of the judges Jamie Berard again, I hadn’t seen him in a couple of years. We go way back, almost 16 years since we first competed against each other. It was really fun to reconnect with him. I’ve seen him in Billund over the years, but it was nice to just hang out and chat for a while. 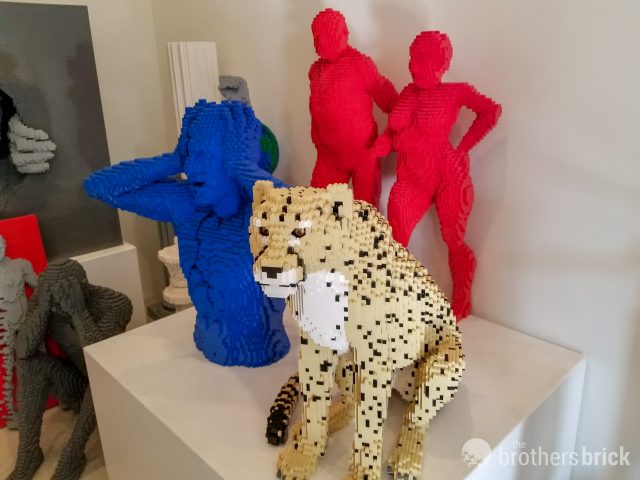 Tell us about your LEGO journey from being raised in Oregon, being in the legal profession, to what you’re doing now.

When I was in Oregon, LEGO was a respite. Growing up, it was something where I could go after school and create. When I got to New York City, it was harder to find the space I needed to build the LEGO creations I wanted. Yet I was still there for 22 years, trying to make it work in little art studios, while building giant sculptures. That was confining, brick-wise. Moving out to L.A. has given me the space to do what I want and really given me a little more time and creativity to explore. 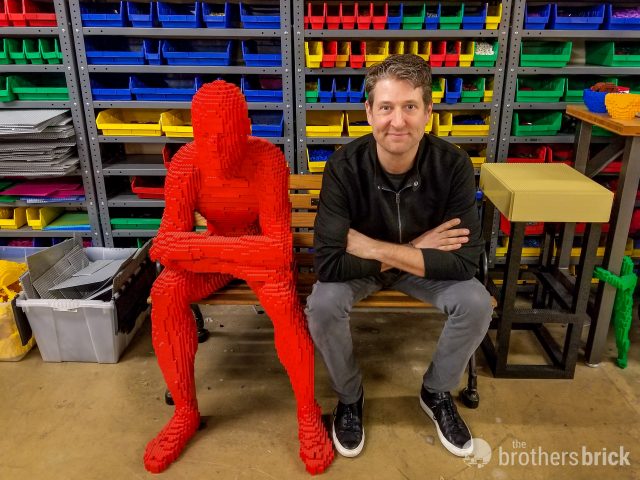 Are you involved in the local AFOL community?

Unfortunately, not really. I just don’t have the time. I used to go to conventions like Brickworld and Brickfest, but I haven’t been out for years. I work with Brandon Griffith on my team, who is much more involved with the AFOL community, and he keeps me in the loop as much as he can. 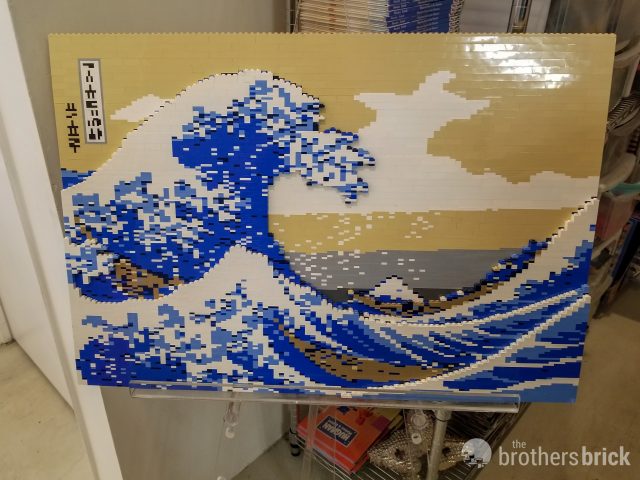 What was the most recent LEGO set you built?

The gingerbread house for the holidays! I’ll build some Star Wars sets from time to time and any of the city modular sets for sure.

What theme would you want to design for if you worked for LEGO?

I’ve never really thought about it. I enjoyed the opportunity to do the Statue of Liberty years ago for the LEGO Factory set. I really love doing any sculptural aspect in a set. But when it comes to where I’d like to challenge myself, it would probably the modular city builds. I don’t do a lot of minifig building. You rarely see me using minifigs or building at that scale. So that’s where I would really love to challenge myself and see what I can pull off at that scale. 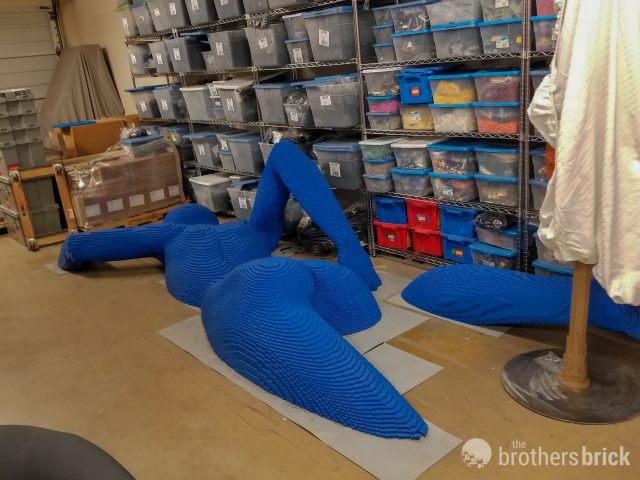 Which classic LEGO theme would you like to see brought back?

I was a classic Town kid growing up. I loved the Exxon station that I have right over there (points to the set on a shelf). Main Street was probably my favorite set as a kid. Of course, I had the Galaxy Explorer too, so Classic Space has a special place in my heart as well. 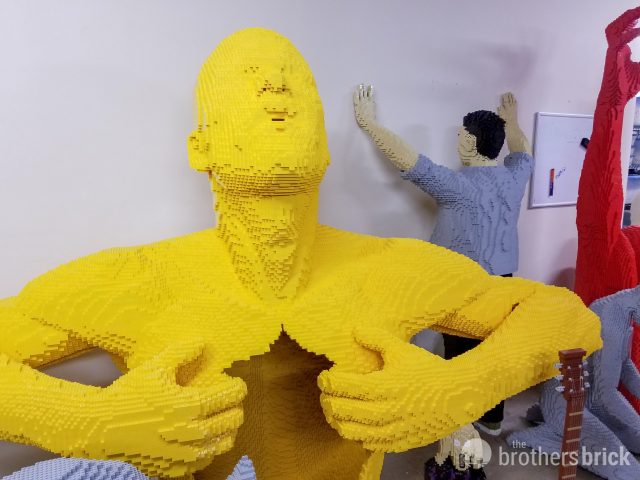 My favorite element is probably the jumper since it can get a lot of detail. My favorite color is Grey. I like grey because I’m always depressed and grey works well for that theme. I feel I can do a lot with it. 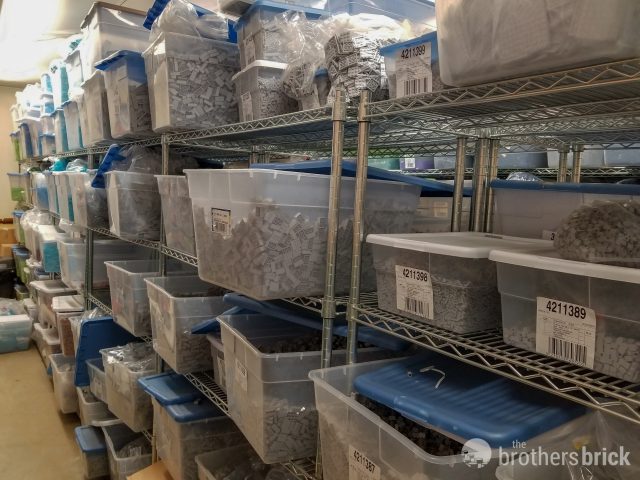 What’s the one element that you wish LEGO would make?

I don’t think in those terms because I like working within constraints. There are times when I wish I had a 1×5 or a 1×7 to bridge a gap, especially if there’s warping on a larger sculpture. I’d really want to bridge the gap without having to use smaller pieces. But I do love the constraints of this System. That’s why I’m drawn to it. I’m always excited to see what’s new, so I don’t think about what I wish I had. 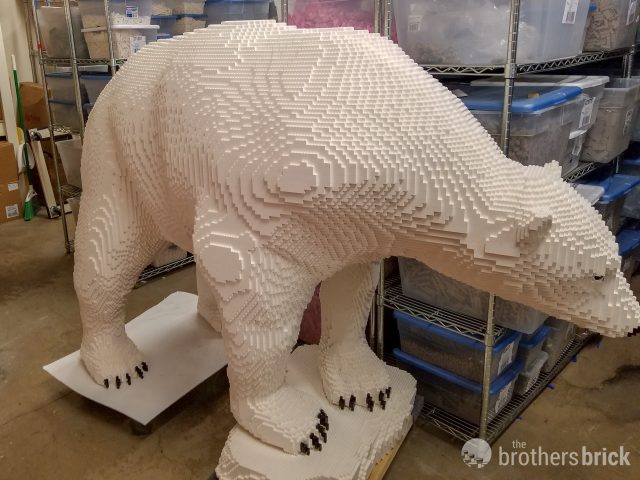 Does Boo (Nathan’s dog, lying at his feet) supervise when you build?

She does. She rarely chews on brick. She usually sleeps right there (under a building table). She’s a good studio dog, and she’s always around, I can bounce ideas off of her, and she never complains. 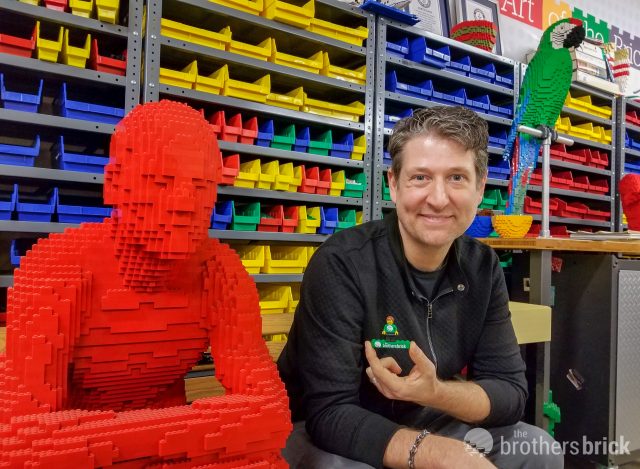