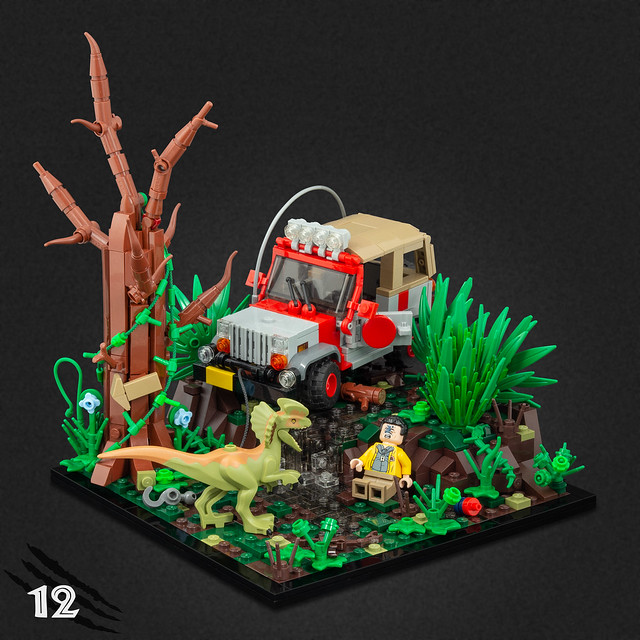 In the next build, Dr. Grant tries to save Timmy from the Explorer knocked into the T. Rex paddock by the Queen of Tyrants herself, leaving the car dangling precariously from the branches of a large tree. I’m not sure which is better: the Explorer or the tree. Both are exceptional builds, the former using some great Studs-Not-On-Top (SNOT) windshield action on the roof and excellent stripes with tooth plates. The latter utilizes round pieces to superb effect as part of a much larger tree. The tension is evident from the masterfully perched vehicle and the minifig posing. We just need some rain to complete the scene. 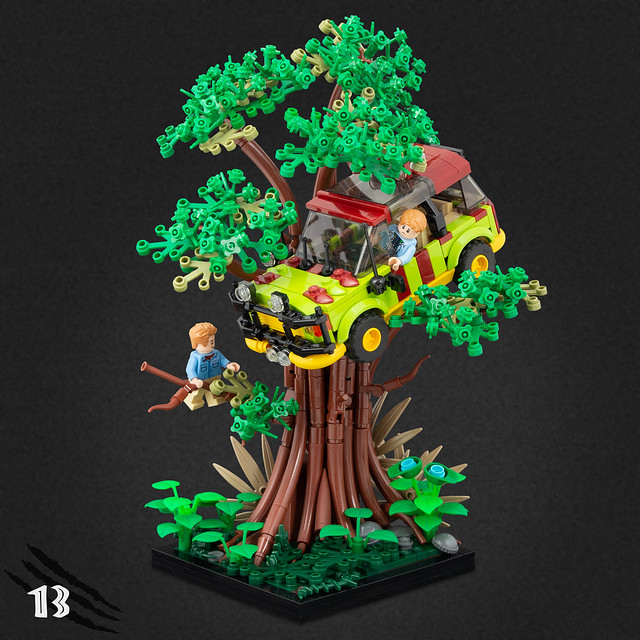 A simpler build allows the Jeep to stand out better than in the first image we shared, and this time we’re treated to a 3/4-view rear angle. This version of the Jeep has the top down, allowing us to see the rippling pectorals of Ian Malcolm. The ground is wonderfully muddy, with detritus made from minifigure hands and droid arms. The trans-black tiles inside the Tyrannosaur footprint are practically quivering as the giant beast chases them. 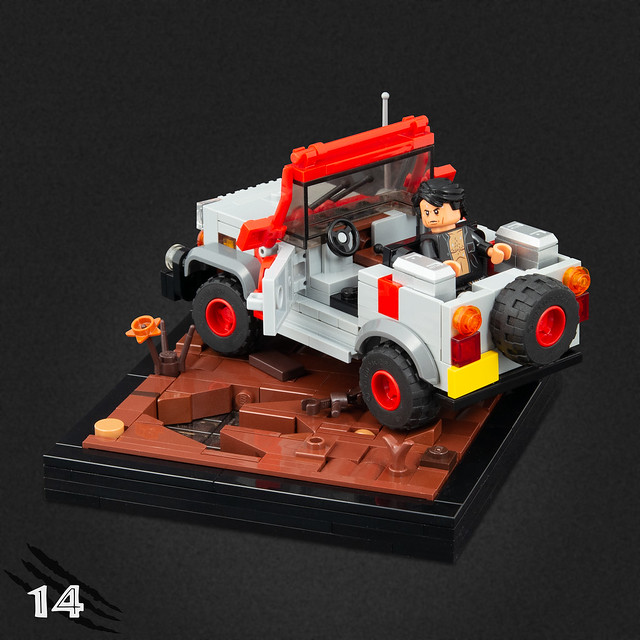 We return to Dr. Grant and the kids, who have now successfully escaped from the SUV-in-tree predicament and are running through the forest. Alan stumbles on an odd find that wasn’t supposed to be possible: eggs from newly hatched dinosaurs. “But wait,” you say, “all of the dinosaurs were female, and in my biology class I learned that it takes a male and a female to reproduce!” Right you are! But some species can change their gender due to environmental triggers, and among them are frogs, whose DNA was spliced into the dinosaur DNA to form complete sequences (whose bright idea was that?). So here is Dr. Grant, looking at those eggshells. Dark tan claws make nice grassy details in the nest, and more rounded parts make for beautifully curving tree roots. Life finds a way! 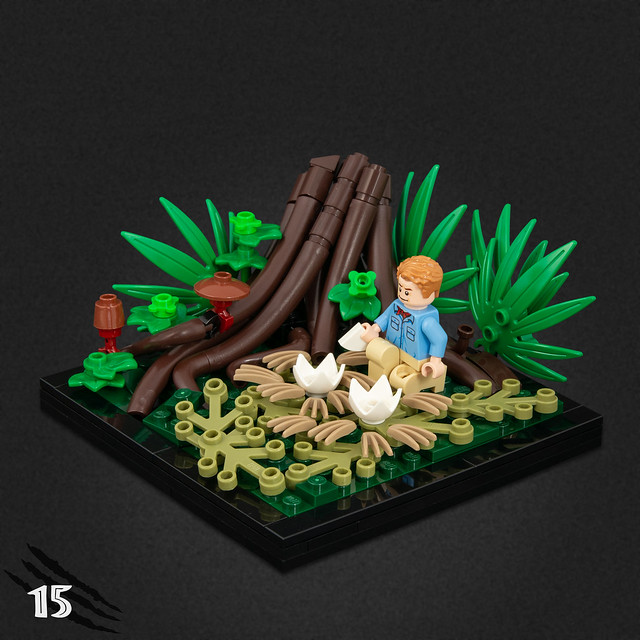 Technic knob wheels come in handy in two places in the next episode, in white with syringes inserted into the holes for the embryo holder in the laboratory. The other is in black for the base of the office chair. This is one of the best rolling office chairs in LEGO I have ever seen, if not the best. Spared no expense. The black octagon makes for a great seat! The scene would not be complete without Dennis Nedry breaking in, all while disabling the security cameras; speaking of the cameras, they are made of disassembled Technic figure arms. That’s some clever parts usage. 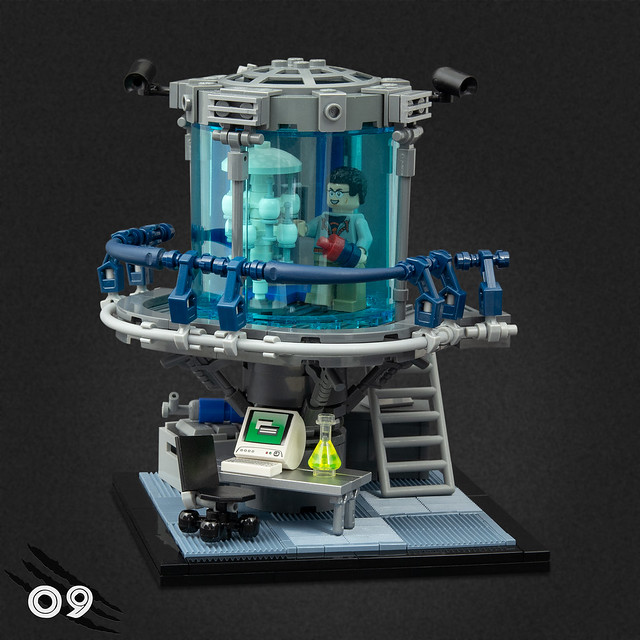 We continue our journey through Isla Nublar with the logical next pile of poo….I mean, bricks. While the guano is nothing extraordinary, Dr. Ellie Sattler’s gloved hand is an excellent use of dual molded minifig arms. Ian Malcolm’s glasses are well represented with the goggles piece, too. 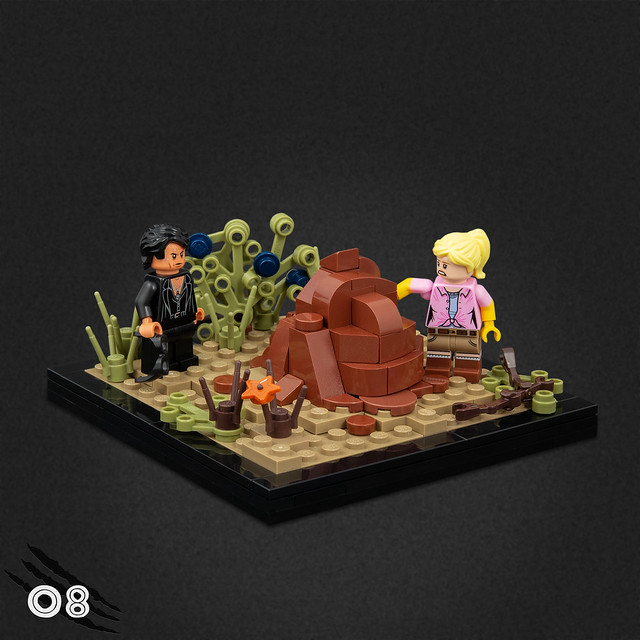 Now, I love dinosaurs, and we have made it through several vignettes now with some sweet vehicles, a pile of dino crap and some frozen dino embryos. We even saw a little Dilophosaurus, but where are the other prehistoric beasts? Well, look no further than episode 10, where a T. Rex breaks out of her paddock. Dr. Grant needs to save the kids from being eaten, so he distracts the dino with a flare. There is everything to love in this vignette, especially the epic T. Rex. It’s a smaller scale model than the behemoth in 75936: T. Rex Rampage yet better shaped. The angle of the electric track and the T. Rex paddock fence make for a much more dynamic scene, and the use of the cables is perfect. 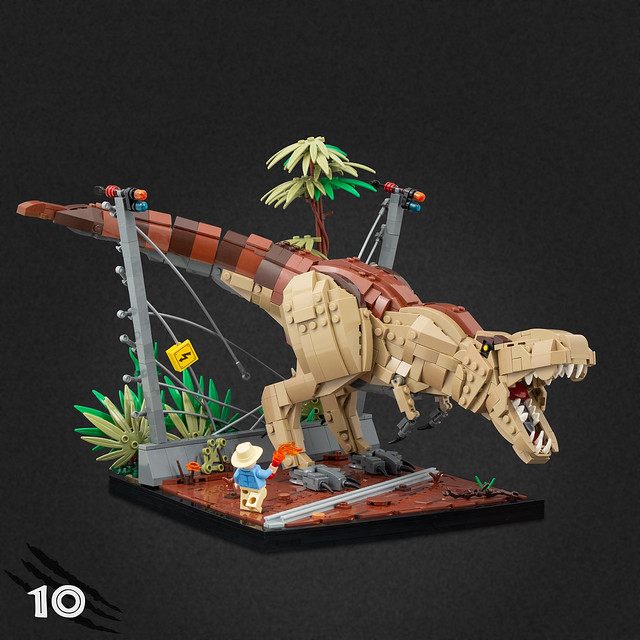 I’ll do my duty and wrap up this installment of vignette coverage with another poop scene you can’t wipe from your mind. This time, however, it is the poor lawyer using the bathroom, and he could not have chosen a worse time or place to answer nature’s call. The roaring Tyrannosaur of the previous vignette is about to find Donald Gennaro and have a little snack. The grill tiles held by clips make for great windows at the top of the stall walls, and I love the toilet and Gennaro’s expression. 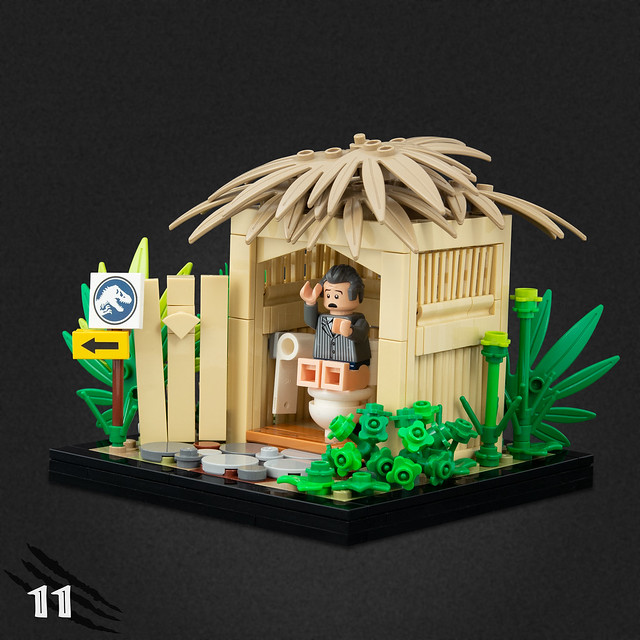 1 comment on “The Jeeps and Explorers that everyone wanted”