Remember the mighty brick-built dinosaurs exhibited in the Masterpiece gallery of the LEGO House? Now, after your next visit to Billund, you can take all three of them with you – or rather their adorable copies designed for 40366 LEGO House Dinosaurs set. The set will contain 864 pieces and will be exclusively available at the LEGO House starting April 17, 2019 for the price of 599 DKK (appr. $90 USD). 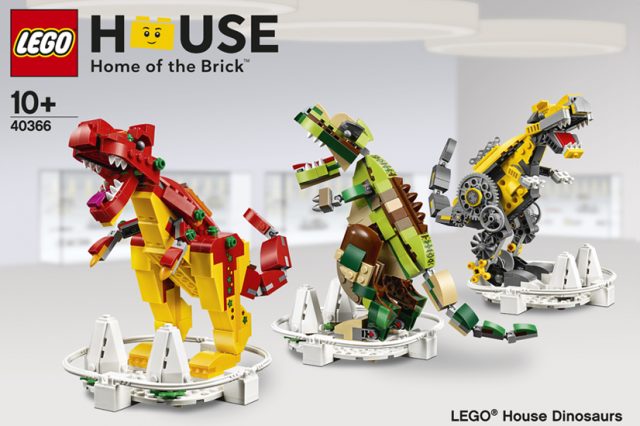 The dinosaurs from the set consist of about a 1000 times fewer LEGO bricks than their gigantic copies mounted in the LEGO House. For instance, the LEGO System dinosaur consists of 253.200 LEGO bricks, while it version included in the set is only 216 bricks big. The LEGO Technic dinosaur is almost 300.000 LEGO pieces, however yellow dino included in the set can be built with just 217 bricks. 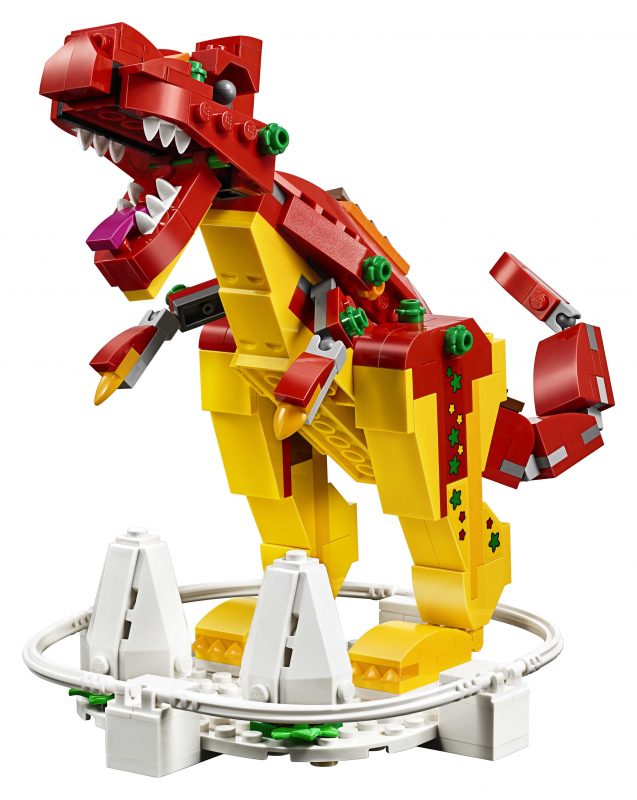 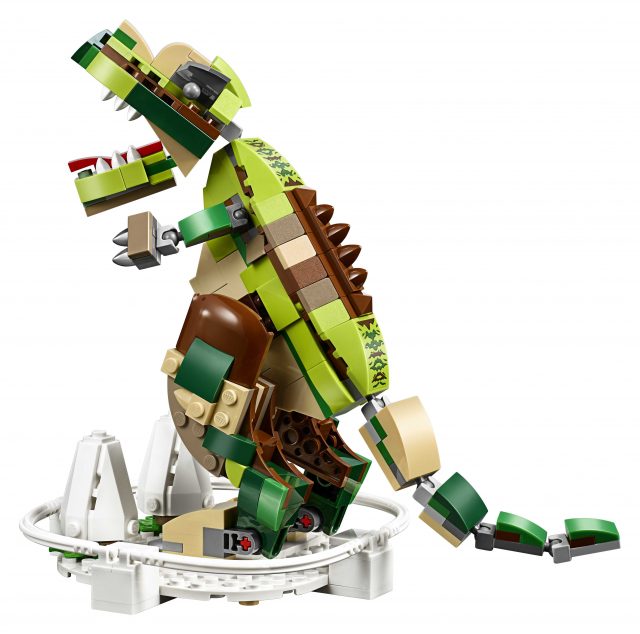 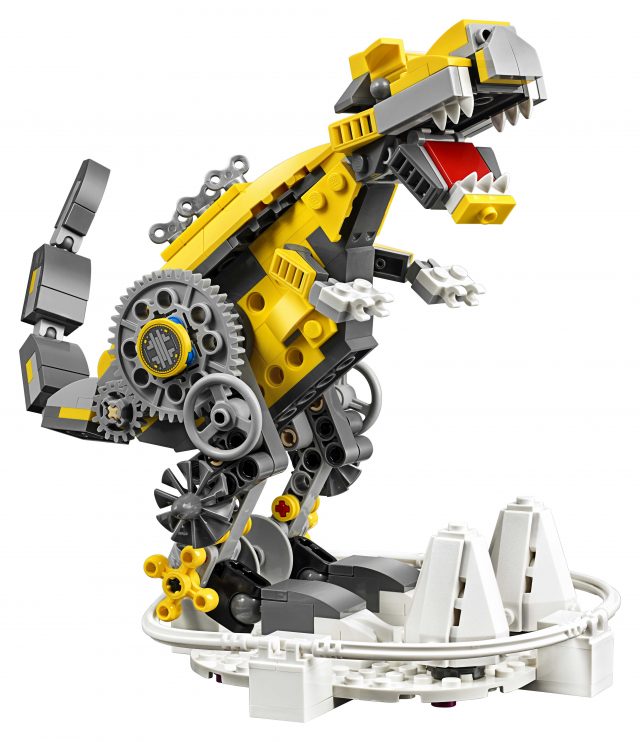 However, since LEGO Duplo bricks are bigger than System and Technic elements, it took only 50.000 to complete the red Duplo dinosaur, but its set version is more massive than the yellow and the green ones and consists of 238 pieces. Additionally, each white podium consists of about 65 bricks. 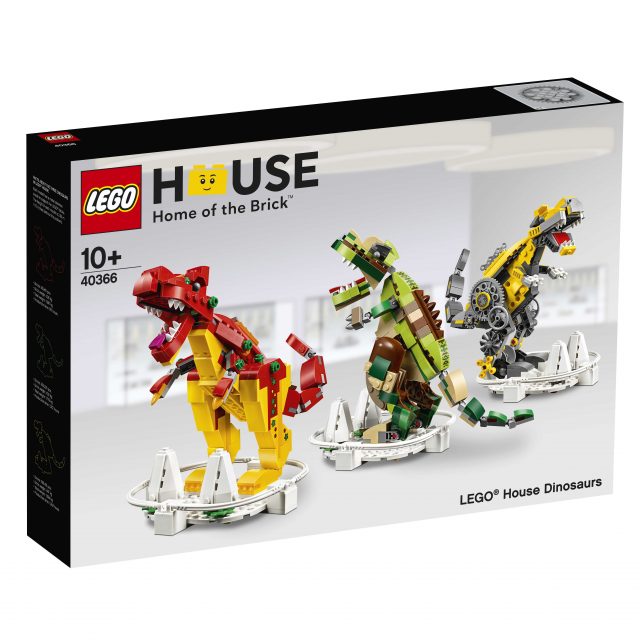 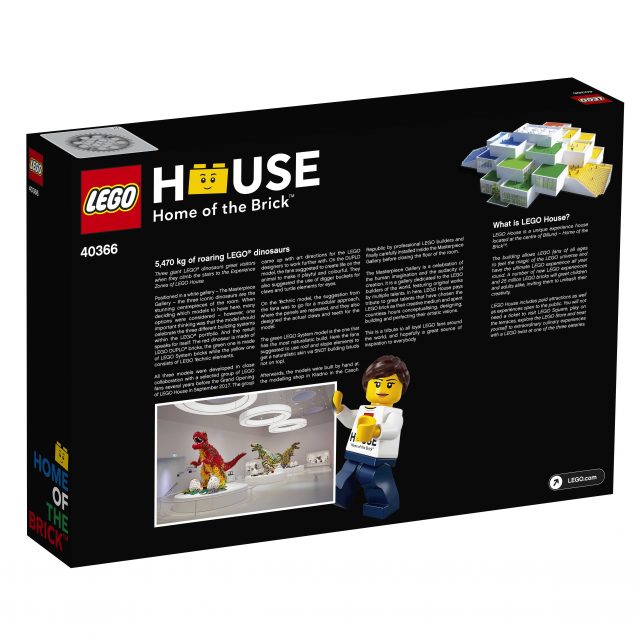 Three giant LEGO® dinosaurs greet visitors when they climb the stairs to the Experience Zones of the LEGO House. Available from April 17th as a retail set.

Positioned in The Masterpiece Gallery the three iconic dinosaurs are the stunning centrepieces of the room. Each model has a metal skeleton inside to support the LEGO bricks, the height of each models is 2,92 m (without podium) and the total piece count of the three models is more than 600.000 LEGO bricks. Now LEGO House has taken on the challenge to convert the three giant dinosaurs into a retail product.

The retail product, LEGO® House dinosaurs, will be launched at the LEGO Store in LEGO House this summer. And if everything goes as planned the first boxes will already be for sale from 17th April.

The LEGO model is a great reproduction of the giant dinosaurs capturing all the most iconic features in a rescaled version.

Designer Nina Koopman says: ”One of the biggest challenges with the new model has been to capture all the details from the big models. Especially since the models in Masterpiece Gallery were all built of the three different building systems LEGO DUPLO, LEGO Technic and LEGO System. You see it especially with the yellow dino where we eg. have used gear wheels, and ventilator elements to get the “Technic feel” into the product.”

The three dinosaurs have been on their way for roughly a year and is the third exclusive product that LEGO House launches. The others being Tree of Creativity (4000026) and the LEGO House Architecture set (21037).

In the new product it has been important to underline that it is both a toy for playing and a display model. Nina Koopman explains: “The aim was to make a stunning product and at the same time, we have worked with integrating moveable parts in the heads, arms and legs to enhance the play experience. Also the construction of the three models has deliberately been made different from each other in order to create three different building experiences, and you can remove the dinos from their podium.”

The model is exclusively available at LEGO House in Billund and the retail price is 599 DKK. (Maximum 3 boxes pr. person).