Unique LEGO creations are great, bringing a new idea or two into the builder community. The latest build by Aaron Newman is one such creation, but the amount of original ideas is just off the charts for a model this size. While we see robot bugs and fully functional transformers every now and again, the whole approach to the concept is completely new with this build. Making the “bug” transform from a translucent egg that then doubles as its wings and the way it was achieved, as well as the bug folding in a logical way within the egg, has many layers of innovativity to it. 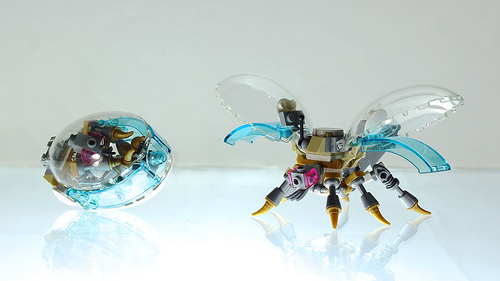 The shape of the creature is quite nice, with characteristically bent feet and what appears as a split mandible. There are some neat parts usages like ray guns and goblets used as legs and translucent pyramid pieces that seem perfect for insectoid eyes. I think the most rewarding way to view this creation is trying to understand the way it transforms and consequentialy appreciating the effort put into it.