Welcome to Day 16 of our LEGO Advent Calendar countdown. Each day, we’ll reveal the three mini-builds from the LEGO City, LEGO Star Wars, and LEGO Friends 2017 advent calendars along with commentary from our team. 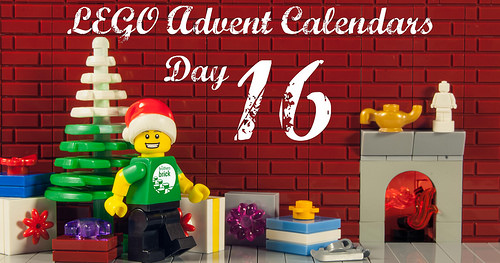 If you’re opening one (or more) of these advent calendars along with us, we’ve made sure the pictures and commentary on each day’s models will be behind a jump and posted in the evening every day, so we don’t accidentally ruin the surprise. What bricks will we get for Day 16?

For Day 6, we have a race car from City, a mini-Krennic’s Imperial Shuttle from Star Wars, and a white cat plus a fish from Friends. 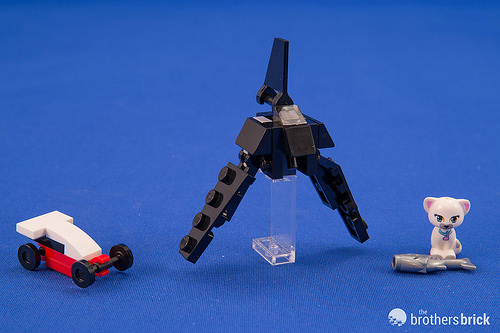 Chris: It may not roll, but I love the skateboard wheels on the City car. Krennic’s shuttle is a good model at this scale, though it suffers from the common microscale problem of having odd gaps. Sadly, the wings don’t fold to landing position like it’s bigger set version, so we had to resort to a stand for this shot. Finally, that cat looks entirely too pleased his kill, which must rival him in body weight.

Luka: The little race car is really cute. The shuttle is built well and is full of useful pieces. As always, Friends is lagging behind with an admittedly cute kitten, but really low parts count.

Elspeth: I’m loving the racing car in City. The Star Wars shuttle is a nice little build with good parts. Poor Friends advent owners are not really getting much in the way of building this year.

Alexander: Nah, Friends advent is the best because of so many animals. And today you get not one, but two in one polybag!

Dave: City is experimenting in Friends-like minimalism while Star Wars shines again. The shuttle has possibly the hardest instructions to follow printed on the small door of the Advent calendar, so you may need a magnifying glass. 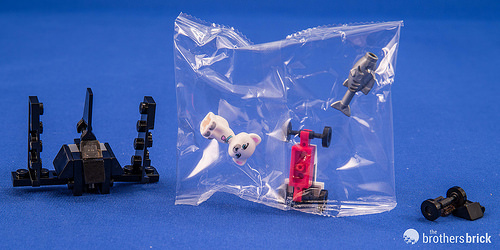 Chris: See what I mean about the shuttle landing? You have to separate its wings to get it to land, which makes for a decidedly non-dramatic entrance for a villain. Speaking of villains, LEGO stuck two pieces in that Friends bag. That’s twice as many as Day 5 got.

Luka: The plastic bag somehow makes it all look like a zero-G environment. A spaceship at the side helps.

Dave: Krennic’s ship landed silently on the frozen ice of Hoth as a nearby glacier cliff cracked and crinkled with the strain of the weight. A perfectly preserved baby Wompa (that coincidentally look like adorable cats in their early years) stared on from her icy prison, a statuesque remnant of a long-past climate change debate that went cold after the tragic ending of the Hoth Indy 500 a half-century earlier. Krennic chuckled to himself as he exited the ship and thought, “All this effort for some decent frozen fishsticks and custard.”