The Warcraft series of games has gone through so much history that it almost lost the corny cartoony nature of the original, especially with the decade of World of Warcraft expansions under its belt. A simple matter of orcs versus humans has been turned around and inside-out so many times that some times, it is just refreshing to see someone like Kalais go to the roots and throw all depth of story out the window for the sake of pure fun. I do often complain how there are not enough LEGO Warcraft creations out there for such a rich universe, but lately this void has been filled adequately. 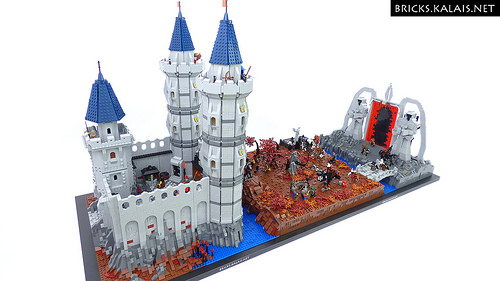 There is so much action going on in the scene and the iconic blue roofs of the castle look nice, but my favourite part is the portal on the right-hand side of the diorama with a red mist effect on the edges and ominous statues positioned right besides it.