According to any fan of motor racing series, there are exactly 18 sights in a tiny city-state of Monaco. Of course, these are 18 iconic turns of the Monaco Gran Prix circuit, each is unique and has its own character. Building the whole track with LEGO bricks would be quite an ambitious task, but Simon Pickard absolutely nails, probably, the most beautiful of them — the famous Grand Hotel Hairpin. 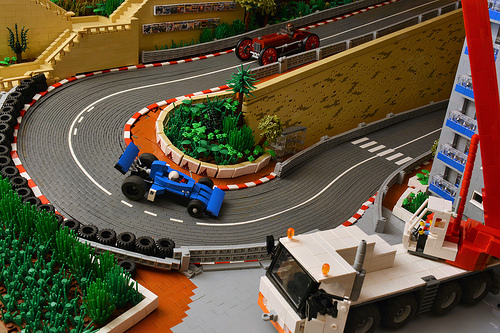 Actually, the Grand Hotel Hairpin is the slowest turn in the whole Formula 1 calendar, which is taken by modern cars at approximately 40 mph/65 kph. The way Simon recreated the road surface with hundreds and hundreds of tiles keeping the road markings and the curbs is especially noteworthy, not to mention a pretty couple of racing cars from different motor sport epochs.

4 comments on “From old Hotel Mirabeau down to Portier”