Orthanc, home of the corrupted white wizard Saruman, is an important part of the Lord of the Rings trilogy, and is even referenced in the title of the second book, The Two Towers. The film version of the tower may not be quite as iconic as Sauron’s Barad’dur, but it’s still managed to burn itself into the memories of fantasy lovers all over the world. This microscale LEGO recreation by Maelven isn’t the first LEGO Orthanc model we’ve featured, but the builder has added a lot of great style to it. 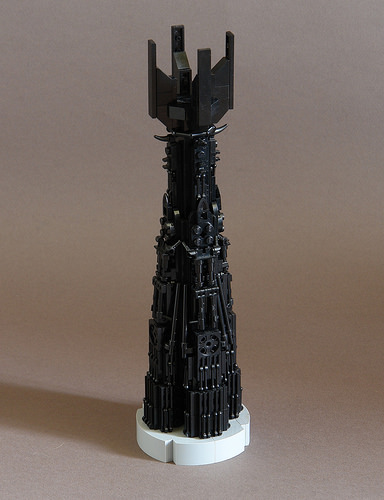 Although quite a departure from this builder’s comfort zone of highly accurate Star Wars vehicles, Maelven did not disappoint in this turn to fantasy. The intense details on the tower will keep your attention for more time than you would expect, but what I really like is the gradual but very fluent tapering of the tower’s shape towards the top — an effect achieved by slightly tilting many bars and plates on the surface of the creation.

Like this tiny Orthanc? Check out this diorama of the breaking of Isengard featuring a 7 ft tall Orthanc, or a detailed 8 ft tall Orthanc with a full interior.