Since the introduction of 10253 Big Ben, 10214 Tower Bridge and some LEGO Architecture sets, the LEGO Company seems to be on a mission to LEGO-ify London. Today, they’re adding more to the batch with a model of another hallmark of the British capital with the 10258 London Bus. This 1686 piece set will be an awesome addition to the LEGO Creator vehicle lineup as well, taking its place right next to another British icon, the 10242 Mini Cooper. The iconic red double-decker bus is an impressive copy of an AEC Routemaster, which first appeared on London streets in 1956 and ran till late 2005, becoming one of the world’s best-known public transportation vehicles. 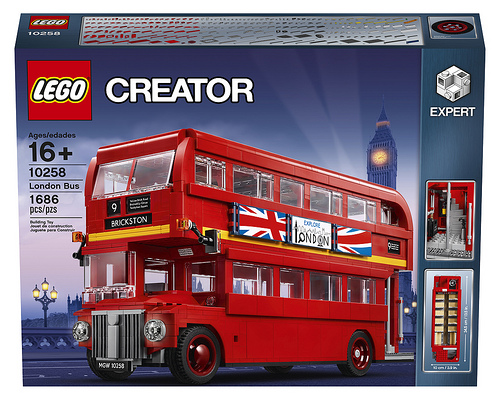 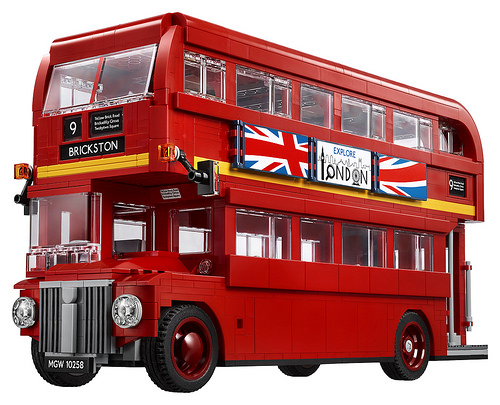 If you want to be among the first fans to see 10258 London Bus in person, on July 1 you can visit one of 5 LEGO brand stores in London for an official unveiling of the set and the ability to purchase it early. For everyone else, however, if you want to buy one you’ll have to wait for the launch date of August 1, 2017, or get VIP early access on July 17. We’ve got the full press release, designer video, and all the images below.

All aboard the London Bus!

Take a nostalgic journey with this LEGO® Creator Expert replica of the world-famous double-decker London Bus. Grab the hand pole and step onto the open rear boarding deck, complete with a used ticket bin and fire extinguisher. Then take the half-spiral staircase to the sightseeing deck where you’ll find a cozy seating area and a number of other items, including a forgotten umbrella, newspaper, empty beverage can and even discarded chewing gum stuck under a slightly-worn seat. Slide the door to access the driver’s cab with panoramic windscreen, lift the hood to reveal the engine, remove the roof and upper deck to access the interior, and choose your favorite decade with the reversible transit-advertising posters, featuring a 1950s or present-day London promotion. From the distinctive lines and curves of its bright-red bodywork, to its specially made standard-tread tires and destination sign, this beautifully crafted model oozes authenticity and intricate details that capture the character and charm of a celebrated London icon!

• The London Bus comes with an array of brick-built features and details, including large windows, bright red curved bodywork, panoramic windshield, reversible transit advertising posters provided as printed labels, specially made standard-tread tires and a destination sign. It also has an opening hood with engine, detailed driver’s cab with sliding door, and a removable roof and upper deck for access to the detailed interior.
• Interior details include worn look seating, open rear boarding deck with a hand pole, ticket bin, fire extinguisher and a half-spiral staircase that leads to the sightseeing deck. Additional authentic detailing includes a forgotten umbrella, newspaper, empty beverage can and discarded chewing gum elements.
• Choose your favorite decade with the miniature, reversible transit advertising posters, featuring a 1950s or present day London promotion.
• Remove the roof and upper deck for full access to the detailed interior.
• Slide open the driver’s door to access the detailed cab with panoramic windscreen.
• Lift the hood to access the engine.
• Special elements include a new-for-August-2017 tire with standard tread, quarter bows and arches in red, and 1x1x1 A2/3 bricks with vertical studs.
• This model includes more than 1,680 pieces.
• This model is scaled for shelf display alongside other models in the LEGO® Creator Expert vehicle series.
• Measures over 7” (18cm) high, 13” (34cm) long and 5” (13cm) wide. 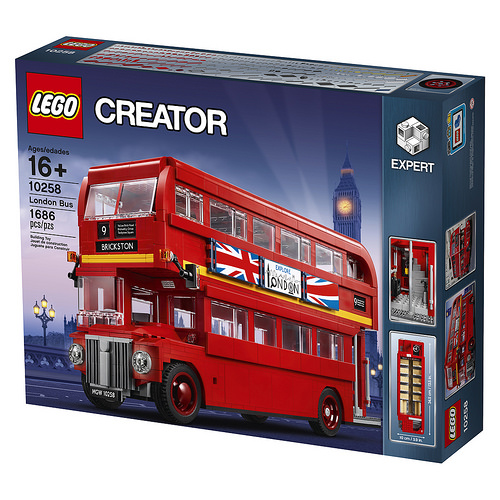 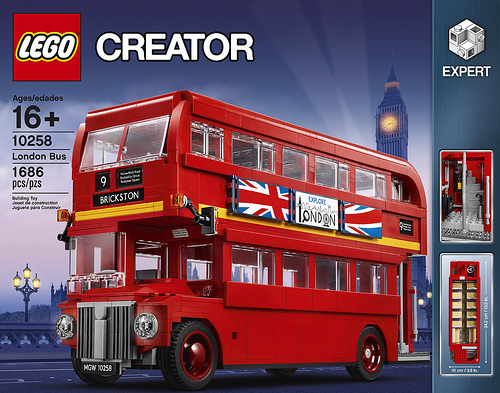 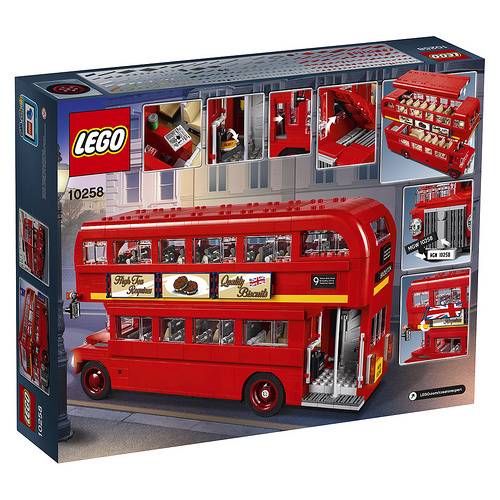 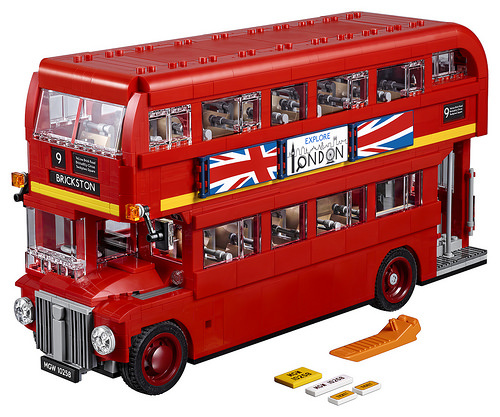 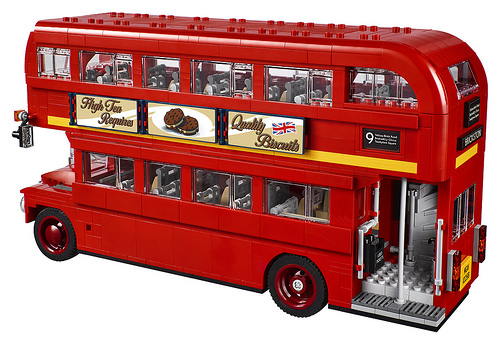 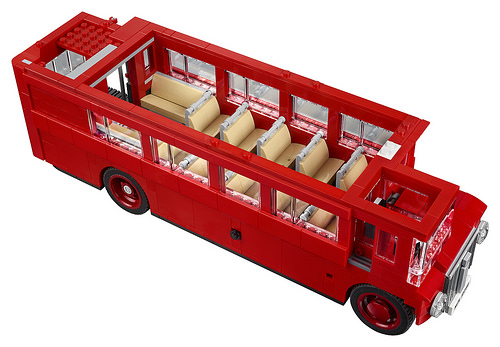 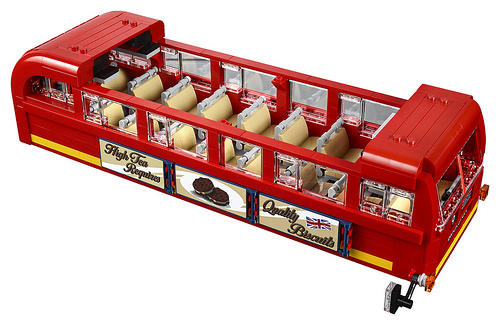 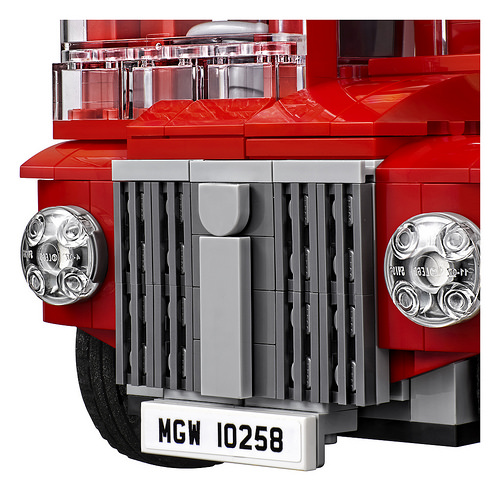 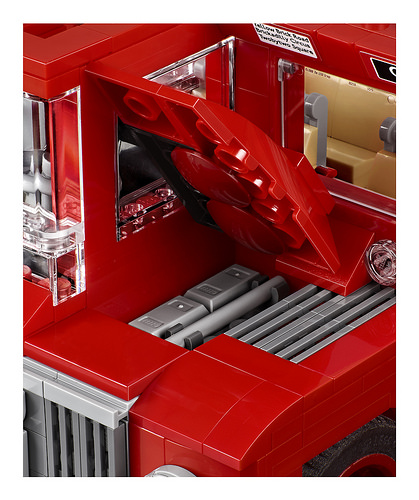 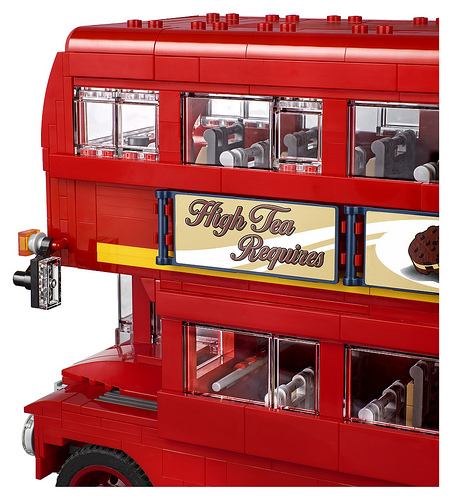 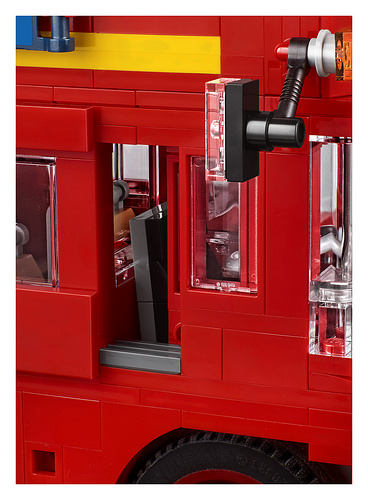 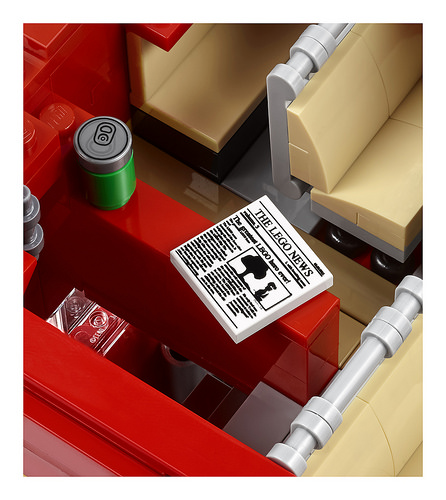 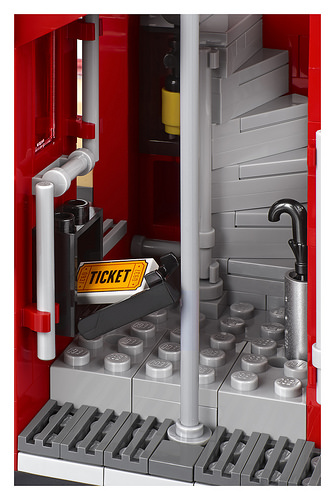 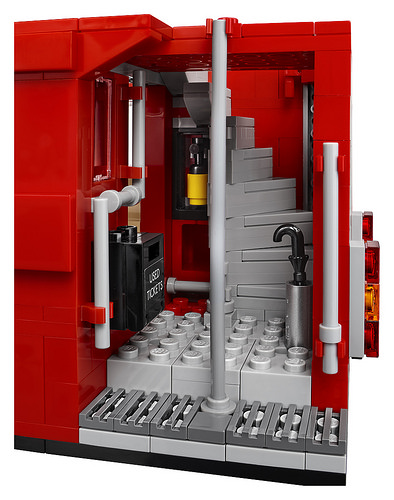