The online LEGO community is an all-around friendly place and quite open to newcomers, with very few exceptions. What few realize is that this comes at a high price; the comments exchanged by builders are friendly and positive — and often that means only positive. And here lies a potential pitfall, because honest critiques and (seeming) negativity tend to be avoided for fear of creating awkward situations. Additionally, not all builders want to receive constructive feedback. The end result is that most creations gather a plethora of dry comments that do not really help the builders improve much. I have been passively raising awareness to this problem for years now, but never have I gone to such lengths as Aaron van Cleave, who has made a series of bad creations as a social experiment. 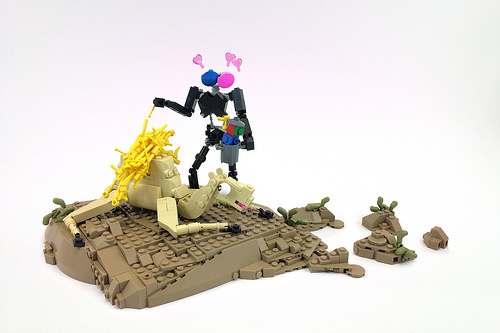 Aaron has summed up the project (as he calls it, ‘art hoax’) with a satirical but purposefully well-crafted creation of a figure representing the Flickr LEGO community breaking a camel’s back with one final straw. While the build is great, the message is the interesting element here. 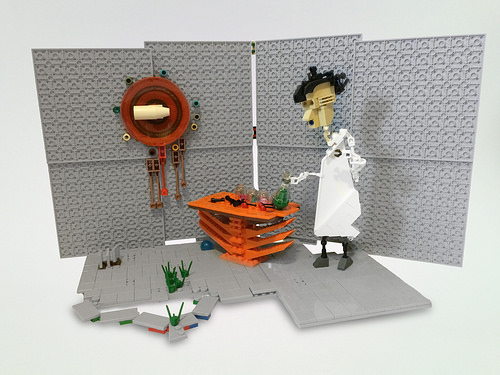 The goal of the experiment was to expose the deficiency of criticism in the tight-knit LEGO building community and possibly induce a change of attitude. With Aaron having a substantial presence in the community, it is little surprise that Aaron’s intentionally bad creations still got a very positive response. Some people were intimidated by Aaron’s reputation, some took it as expressionist art and some were simply confused. But few were brave enough to be brutally honest with the builder, which was actually what he was hoping for. For anyone who is interested in reading more about this, Mr. Van Cleave has writen quite a lengthy blog post about his experiment over at the KetihLUG Manifesto.

I think we can all learn something from this. First of all, while it has not been explicitly stated, we can probably all agree that constructive criticism helps people improve over time. Even though we all like those juicy positive comments, they are not the driving force of improvement. It is not all black and white though; while honesty is a virtue, so is being considerate of others. There is also an onus on each builder to let their friends and followers know what sort of critiques they are open to receiving. Ultimately, there is a fine balance that needs to be kept, and while the pendulum for the moment may be too far to the overly positive side, I do not want it to swing into a dark direction that may be offputting to new and younger LEGO enthusiasts.