Despite its harsh nature, I would love visiting the Orange Fern Gorge, as built by W. Navarre. The jewel merchant minifigs in the scene probably do not share my sentiment, however, as their intrepid expedition might be born more of necessity than love for the scenery. And what a gorgeous scenery it is! The layers of rock are a beautiful balance of rough but clean, while the ground’s texture compliments the rocks well. A careful combination of olive and sand green accented by a few pink flowers adds just enough life to the scene to still look barren and dead, but not boring. 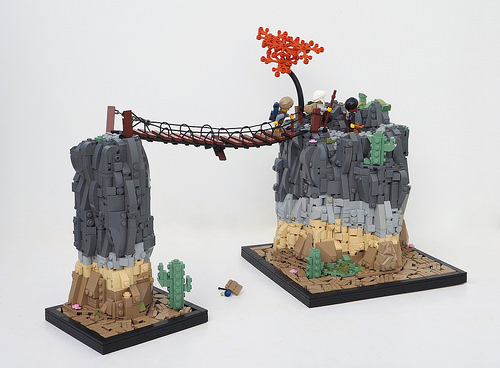 The bridge is quite interesting on its own – while it’s possible the model builder may have run out of string while making the bridge and added a short chain as the support on one posts, it’s also probably what the bridge’s makers would do if they had run out of rope. Finally, having the two rocky pillars presented on separate base plates adds a lot to the composition as well.