Imagine Rigney has been combining his love of LEGO and retro-scifi video game Bioshock for years. The Brothers Brick first covered his impressive entrance to the underwater city of Rapture in 2011, and in 2014 Imagine’s breathtaking Bank of the Prophet from Bioshock Infinite amazed us with its stunningly huge songbird perched above the floating city. 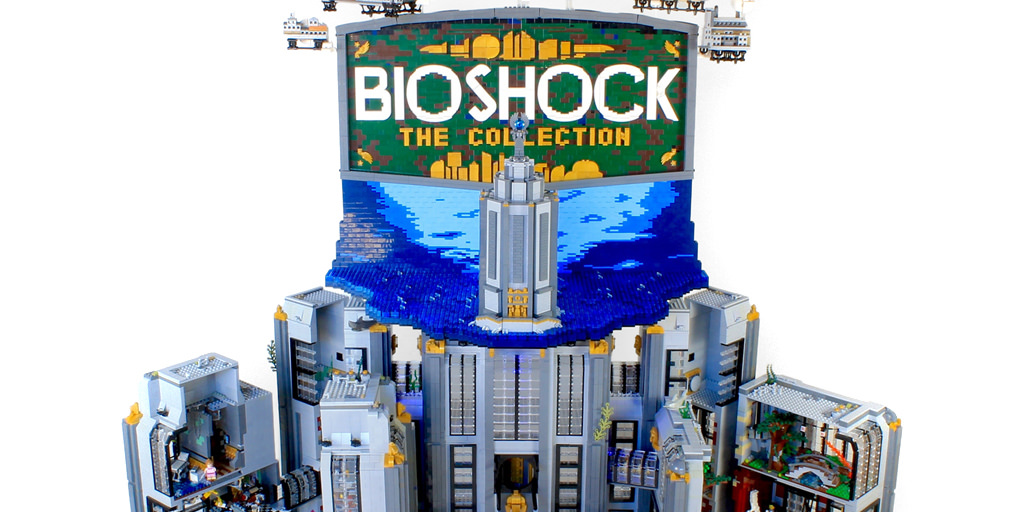 Well, we weren’t the only ones who noticed Imagine’s incredible talent — Bioshock developers 2K Games have also been keenly following his brick-built fan art. Recently, 2K contacted Imagine and asked him to build a brick version of the cover art for their remastered edition of the Bioshock games, Bioshock: The Collection. Never one to shy away from a challenge, Imagine set to work, and has turned out this jaw-dropping collage of Bioshock imagery. 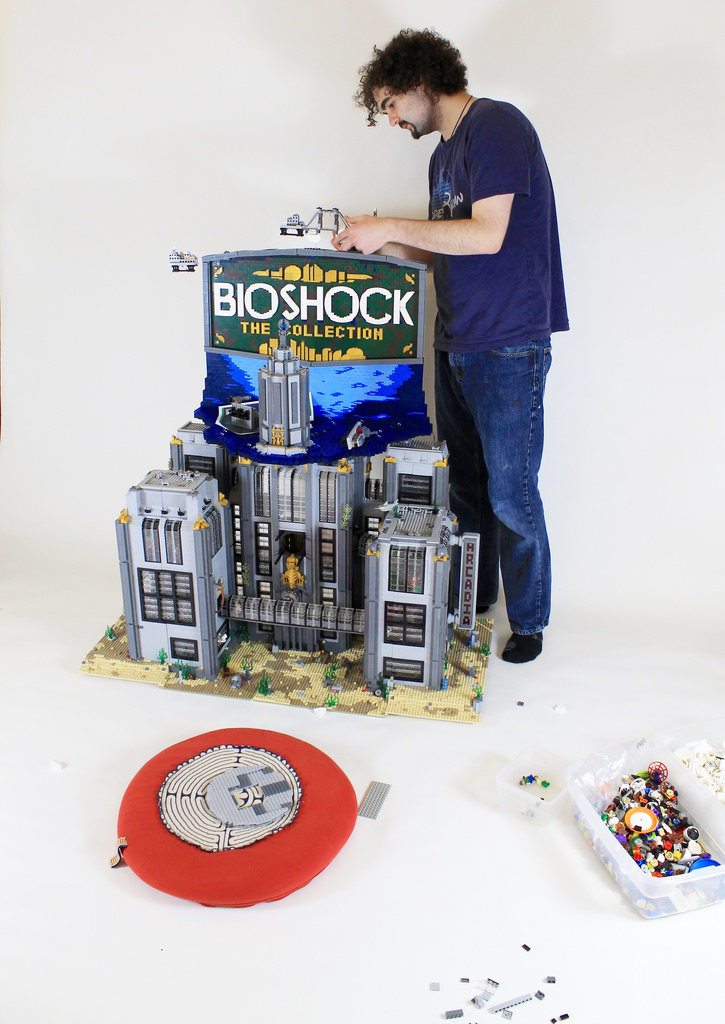 Imagine says that the quick timetable for the game’s release only allowed him about a month to build the model, which uses over 35,000 pieces, though he estimates he packed 200-300 hours of work into that time. 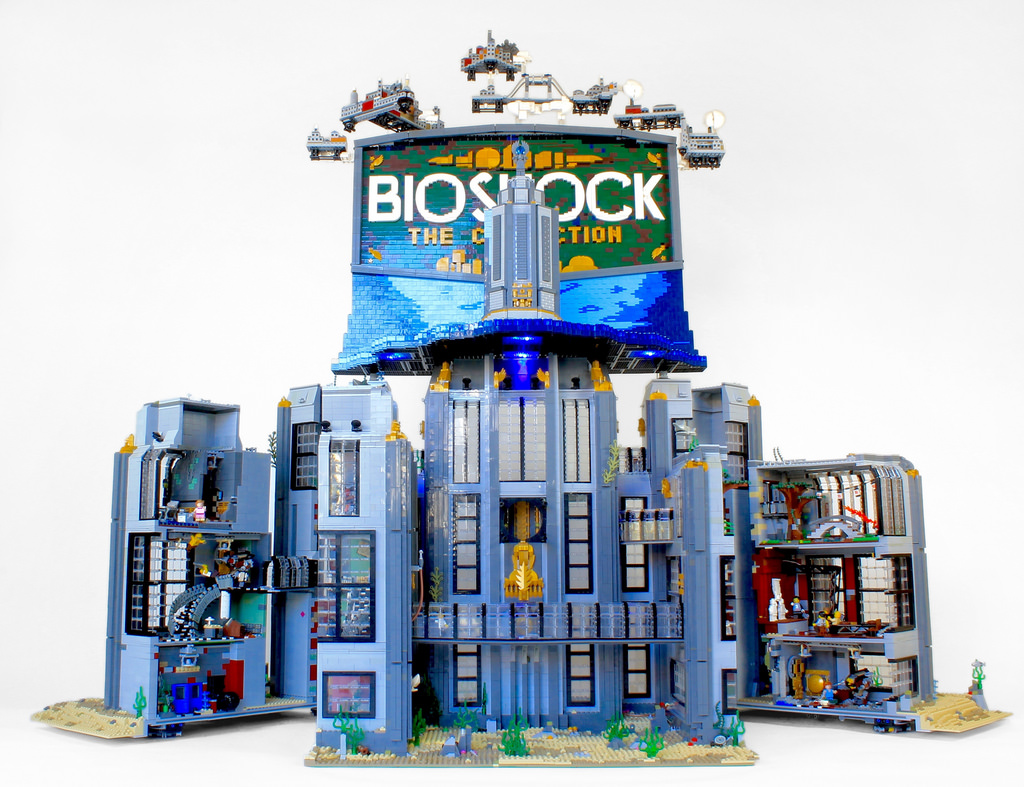 The final creation portrays the floating city of Columbia in microscale perched in the clouds high above the iconic lighthouse that serves as the entrance to Rapture. 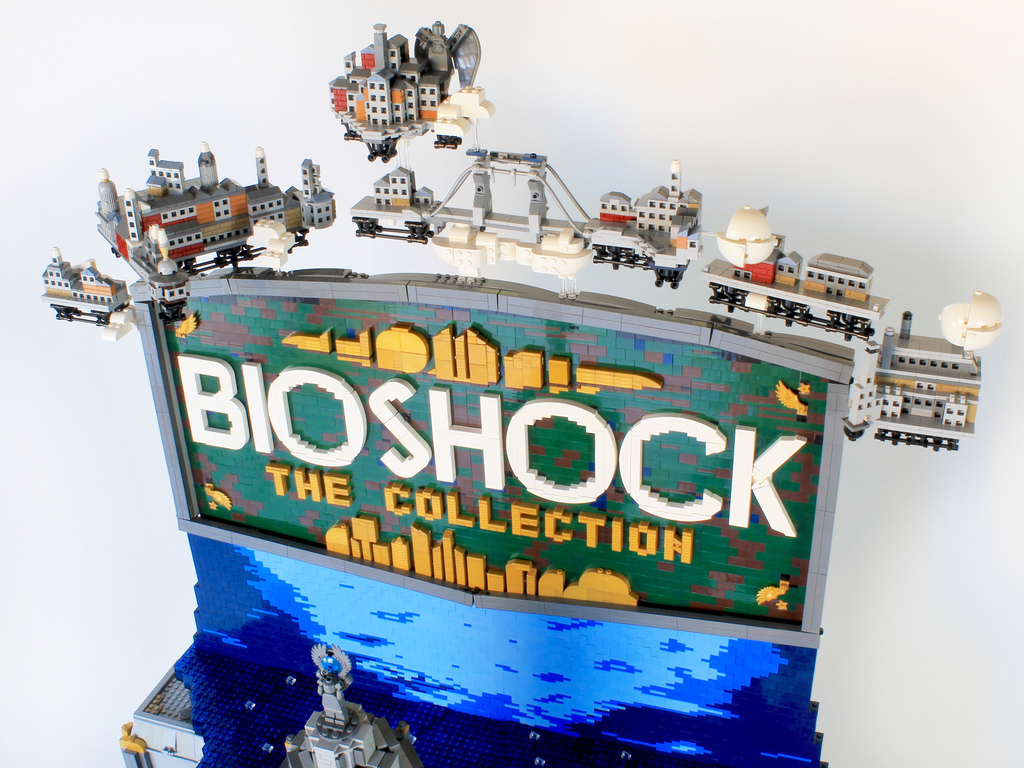 Below the water is a huge diorama of the futuristic underwater city that swings open on each side to reveal a full interior featuring scenes from the games. It even lights up to cast a ghostly blue glow over the sunken city. 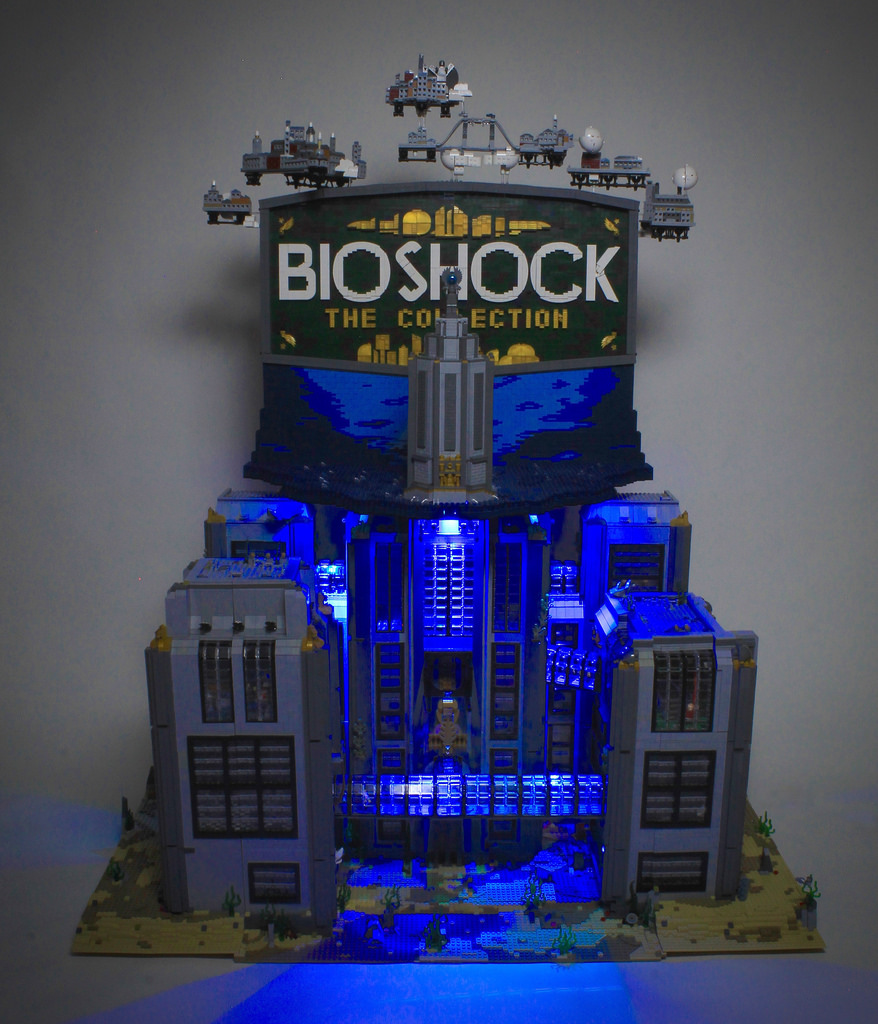 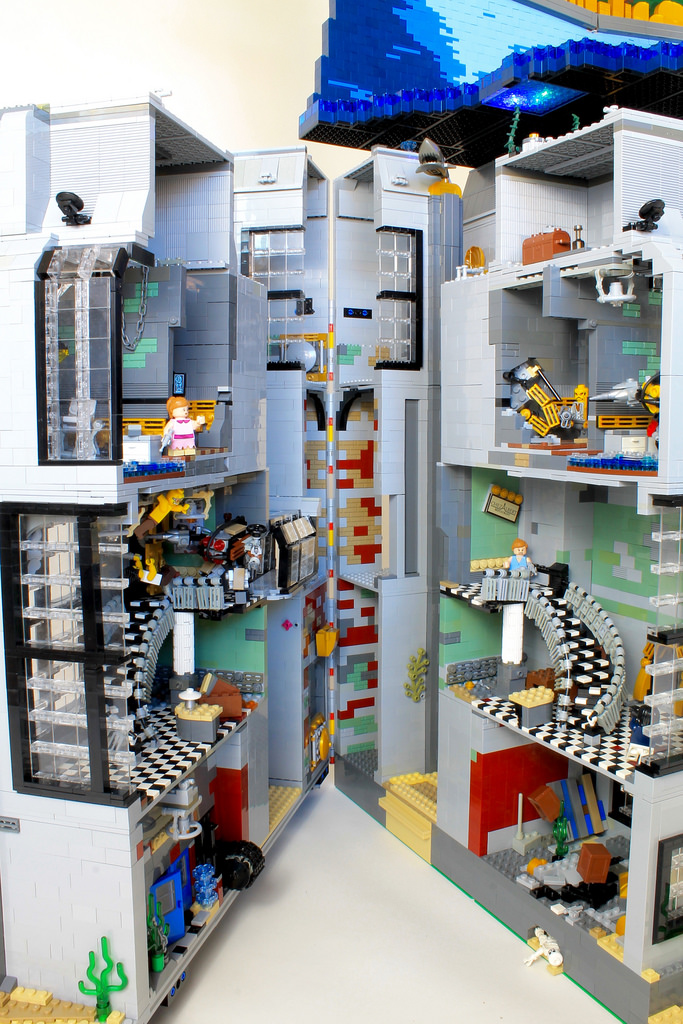 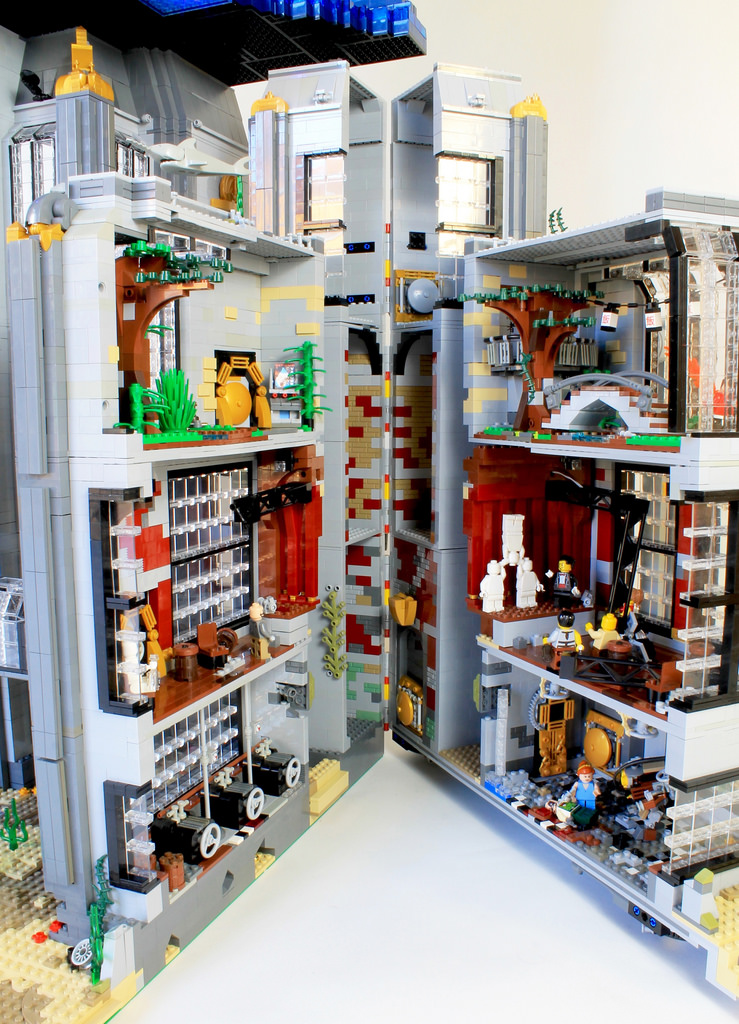 Imagine notes that the lettering on the title was the most difficult aspect to design. “Square bricks are not designed to make round letters. Getting the curvature of some of the words in the logo mosaic was easier said than done,” he told 2K Games. 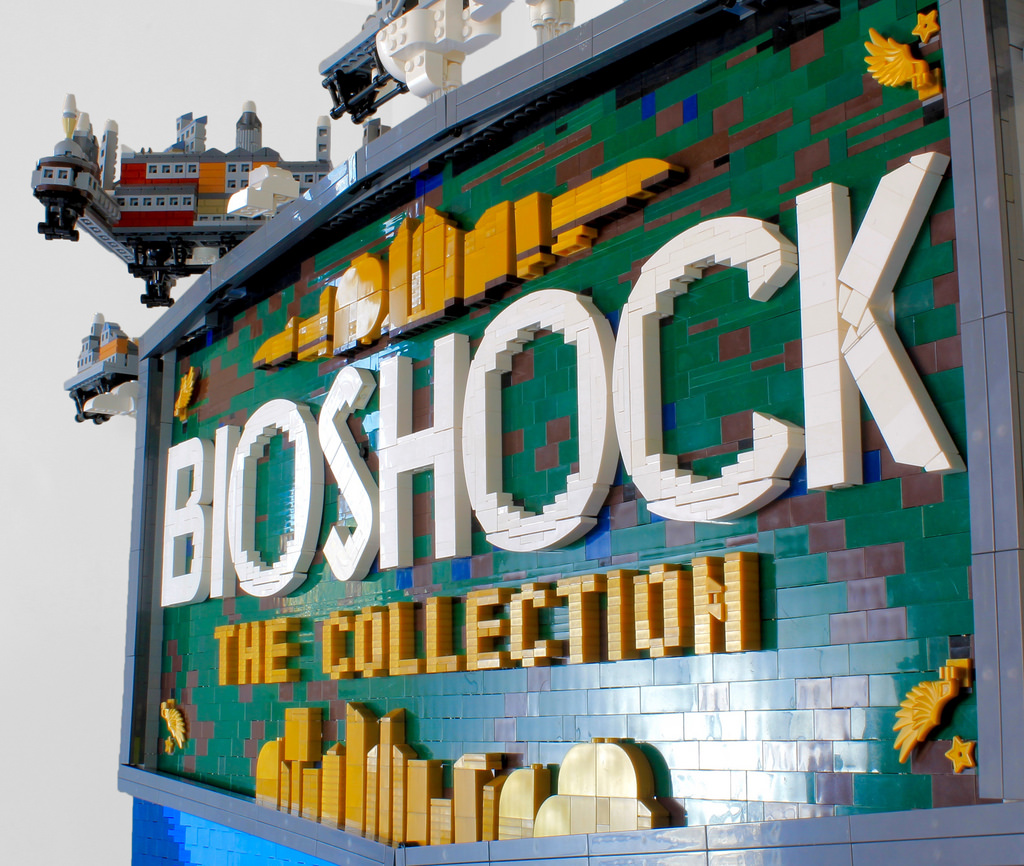 Be sure to check out more of Imagine’s work like this life-size Sky-Hook from Bioshock Infinite, or try your hand at creating a miniature LEGO Songbird with from Imagine’s instructions.

You can see more pictures of the Bioshock Collection diorama in Imagine’s flickr album.