The March wave of LEGO sets brings us lots of new sets, including the new Elves Dragons and Speed Champions we’ve already reviewed. But it has a more cartoonish face too, by the name of Mighty Micros. This new line brings to LEGO Superheroes (of both Marvel and DC persuasion) the chibi-fied look that’s now familiar to LEGO Star Wars fans through the popular Star Wars Microfighters line. Today I’m taking a look at two of these new Superheroes sets, provided to us courtesy of LEGO. Both 76063 Mighty Micros: The Flash vs. Captain Cold and 76065 Mighty Micros: Captain America vs. Red Skull retails for $9.99 USD. 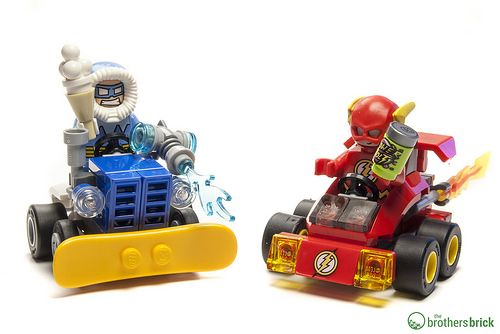 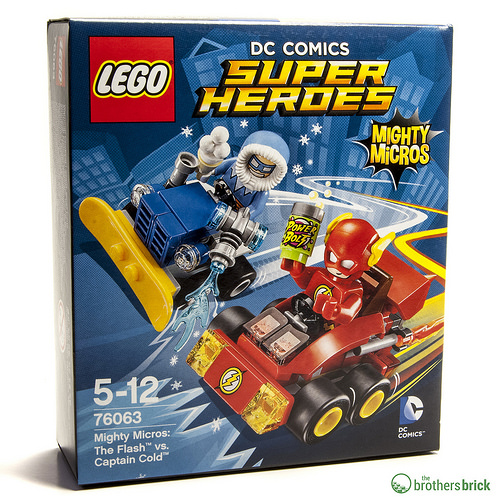 First up is 76063 Mighty Micros: The Flash vs. Captain Cold, which has 88 pieces. Each set in the Mighty Micros line contains a hero and a villain with their own unique chibi vehicle. Here we get The Flash riding a little red go-cart, and Captain Cold bullying through on his miniature snowplow tractor. The box contains several unnumbered bags, and three single-page, double-sided instruction sheets—one for each vehicle, and a third that’s a mini-catalog and also has the part inventory. Each of the vehicles is a simple build, thanks to a new double-axle chassis piece,

which makes easy the compact building needed for such small vehicles. 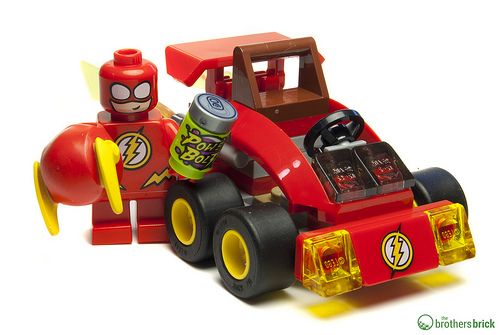 The Flash’s go-cart has a printed slope on the front, and a rather large spoiler on the back. It also has two Ninjago flame-swords positioned as “speed streaks” out the back. Because all the Mighty Micros characters are chibi versions and have stubby legs which don’t bend, each hero or villain stands in their vehicle, which helps keep the vehicles incredibly tiny. The Flash himself is a great fig. He’s appeared in two other LEGO sets previously, but the

only holdover this time is the helmet. The torso and head are new. The torso is very similar to the older version but is a bit more simplified, and the head is more cartoonish and wearing white goggles for driving. The Flash also comes holding a can of Power Bolt. The soda can features the 1×1 round tile with the pop-top lid print, making this set the cheapest way to get a LEGO soda can. 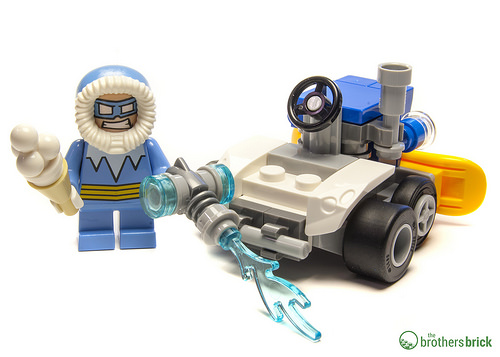 Captain Cold’s blue tractor is pretty straight forward. It’s a small blue tractor built on the same base as the rest of the Mighty Micros. It uses a bright light orange snowboard strapped to the front as a snowplow. Captain Cold has appeared before in LEGO form, but like The Flash, this version is unique and cartoonish. Captain Cold carries an ice-cream cone and his cold gun, which shoots ice. 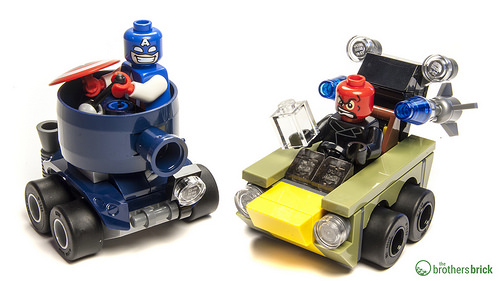 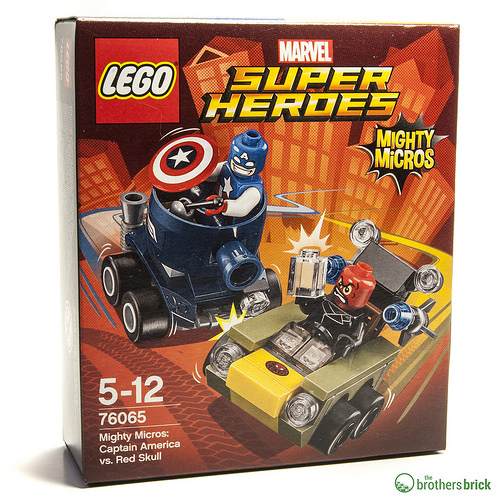 Secondly, we have 76065 Captain America vs. Red Skull, which is definitely my favorite of the series. Here we get Captain America driving the cutest little dark blue tank. The tank is a very clever build, using some nifty half-stud offsetting to center the turret and give Cap room to stand in it. It uses a minifig bucket in dark blue for the barrel. There’s not much to it and sadly the turret doesn’t spin, but nevertheless it’s incredibly fun having a pocket-sized Captain America tank on your desk. There are two stickers to apply to the sides of the turret, but they don’t add much, so I left them off. Cap himself is a new figure, with a cheesy grin plastered across his face. The uniform is his pre-Avengers Nazi-fighting version, though it’s simplified and unique from the other LEGO versions we’ve gotten. And of course, Captain America comes with his shield. 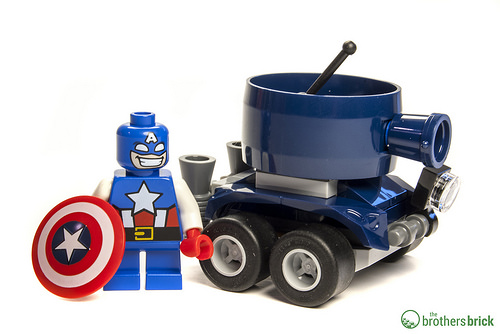 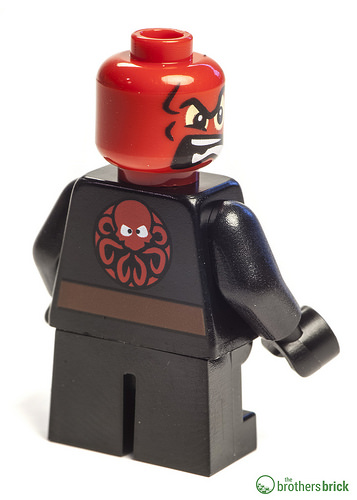 Red Skull’s vehicle rounds out the set. From the box, I couldn’t quite tell what Red Skull was driving, but after building it, it’s quite obvious that the nefarious Hydra head is driving a chibi Volkswagen Schwimmwagen. The vehicle is olive green and yellow, and comes outfitted with a mounted rocket launcher and a tiny propeller in back to aid its amphibious getaways. The vehicle features the first use of a new double wheel-well piece, as well as several other pieces appearing for the first time in olive green, including 2×1 slotted slopes (aka the cheese grater). I refrained from applying the lone sticker: a hydra emblem on the nose. The chibi-version of the Red Skull

minifig is again unique to this set, having a comically grimacing face. On Red Skull’s back is the most adorable chibi Hydra logo you’ve ever seen. Red Skull also carries a Tesseract. 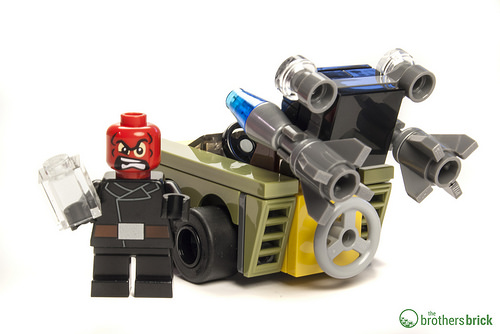 Overall, these sets are terrific. At $10 a pop, each set provides you with adorable, unique versions of an iconic superhero and villain, and you get two fun vehicles. Kids will love them because they’re quick to build and quite durable with the new chassis piece, and the superheroes wear goofy expressions. Meanwhile, adults will enjoy zooming the vehicles around their desks. And, of course, it’s rare that I meet a LEGO and comic-book fan who isn’t excited to get a new version of their favorite superhero. 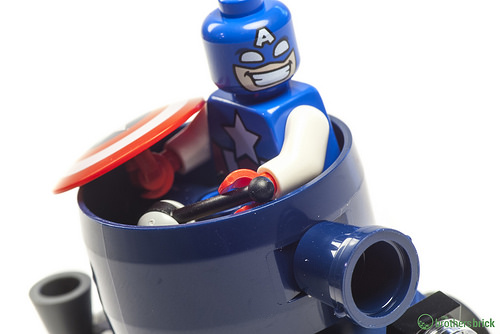 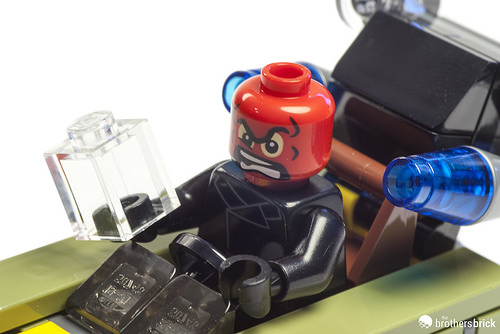