If you’re tired of building your weapons and armor in Fallout 4, take a break and do what Jonas Obermaier did: build your Fallout 4 weapons and armor in LEGO. This super cool minifig-scale scene of the Red Rocket truck stop, which can serve as a makeshift homebase for players, comes loaded with a suit of power armor, weapons, collectibles, loads of desk gadgets, and myriad other components surely destined to be broken down and reused. 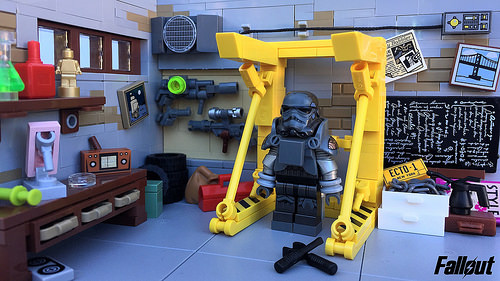 This isn’t the first time we’ve seen the Red Rocket in brick form. We’ve previously featured a spot-on exterior by Markus Rollbühler and a stunning large-scale interior by Pierre. And while you’re checking out Fallout-inspired LEGO models, take a look at this life-size Fat Man mortar launcher.