Brothers Brick daily covers cool fan-built models and LEGO news, but sometimes we get a chance to highlight a story from the human side of our favorite hobby. This touching story by the State Journal Register, an Illinois newspaper, shows how sometimes LEGO can be more than just a toy or a fun hobby. Sometimes it can be a means for healing.

After his wife, Tricia, died in the spring of 2011, Ray Hofman was having a hard, hard time. They had been married 39 years and, understandably, Ray felt lost.
“It was two years of long, long days,” he says.
The Christmas before Tricia died, Ray’s nephew, Jason Stokes, gave him a present. It was a replica of Frank Lloyd Wright’s Fallingwater home, made out of Legos.
It is on such small things life sometimes turns.
“I didn’t know much about Legos,” Ray says. “When I grew up, it was Lincoln Logs.”
But something about that gift resonated with him. 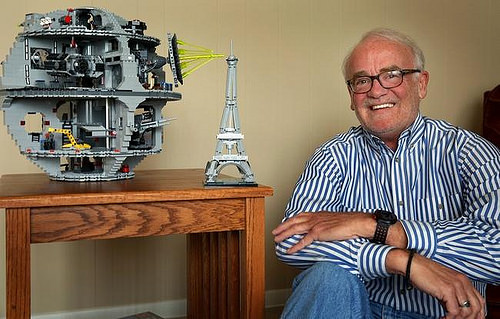 Ray discovered the joy of receiving a LEGO set as a gift, and set out to bring that delight to others. First he built and donated a Taj Mahal to a cancer treatment center charity auction, but soon fell in love with the idea of building LEGO sets and giving them as gifts to everyone around him, including those who least expected it. His postman received sets for his grandchildren, and a local restaurant owner received a Space Shuttle because Hofman knew he was a space enthusiast. His favorite though, is giving gifts to children, and Hofman’s fridge is covered with heart-felt thank-you cards from children.

Hofman has spent the last two years building LEGO sets and giving them away to friends, family, and charities. “It filled a void,” he says.

Read the full story on the State Journal Register.

2 comments on “LEGO fan finds solace in hobby after tragedy”