The Hazel mobile suit from Gundam is a fantastic design, as it portrays a chunky variant of the classic mecha design. It seems fitting that this build is by Two Rabbits, as the name of the Hazel was inspired by a character from Watership Down, which heavily features rabbits. The model captures of elements the original design, such as its broad shoulders and bulbous legs, which have translated perfectly into LEGO form. Covered in vents for manoeuvres in space, the most interesting interpretation, of the mech, is at the legs, where plate handle pieces have been used to represent different segments of the vents.

The version of the Hazel on the left has a booster pack on its back allowing it to blast through space. The rendition on the right features bulky arms which are nicely constructed and attached to the backpack. You can tell Two Rabbits has carefully studied the Hazel, as even the smallest of details have been recreated in this marvelous build.

The Zaku mech is an iconic staple in the Gundam franchise. Here, we can see builder Two Rabbits has created an advanced version, inspired by the Gundam Thunderbolt series. Enveloped in two shades of green with hints of orange and dark grey, the model has a colour scheme accurate to the original mech design. While the broad spiked shoulders provide the build with an aggressive look, the mech also has defensive options with arm shields attached to its backpack. The large amount of orange cones, scattered across the model, represent thrusters used for rapid maneuvers in space. The 1×1 connectors placed on flexible axles is a perfect technique for creating the piping details. 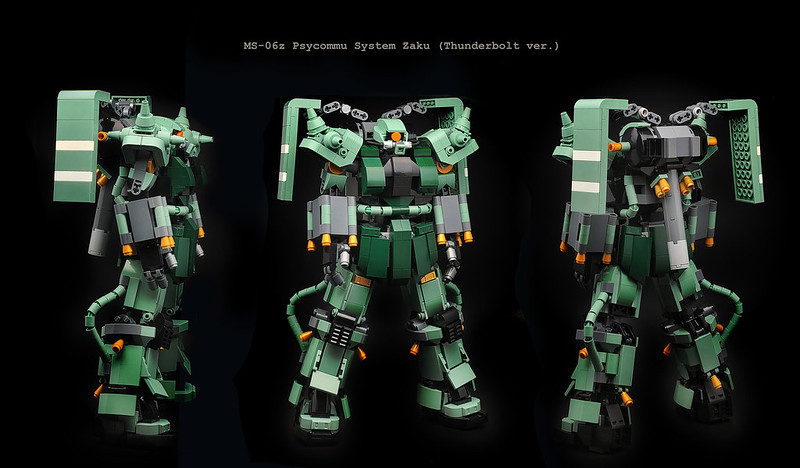 The model has great shaping overall, making its form easily recognisable to mech fans. You can check out more of our articles on mecha related builds here.

The LEGO Ideas Voltron set has made me nostalgic for all the Giant Robot TV shows I watched as a kid back in Japan, not least of which was the fantastic Gundam. Two Rabbits shares my love of all things big and stompy, and demonstrates that passion with a series of really excellent Mobile Suits, kitted out with extra gear like the AQM/E-X04 Gunbarrel Striker pack with Strike Gundam from the SEED series. Beyond the rocket engines and weapons pods, the highly detailed frame itself is worth a closer look, with great shaping on the legs and torso, topped with the iconic Gundam head. 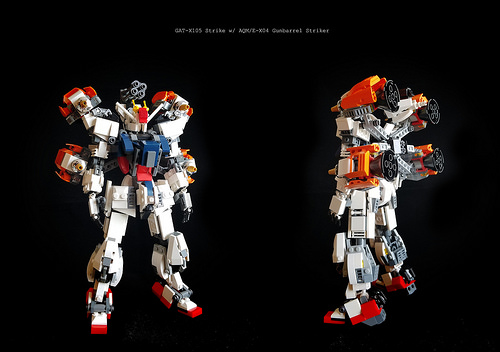 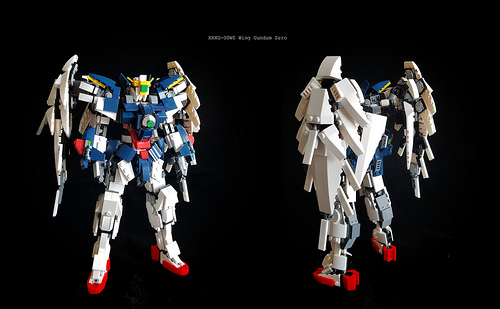