Prolific model builder Aaron Newman is back with another foray into the (LEGO) Wizarding World. 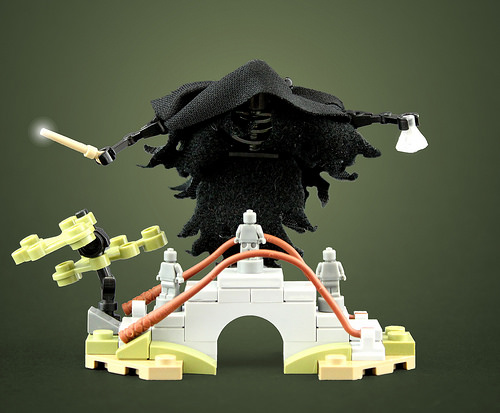 This microscale scene is itself an homage to builder Aaron’s own minifigure scale Tale of the Three Brothers from back in April of this year. The pieces Aaron’s chosen to replicate his own work in a smaller scale are spot-on: bullwhips replacing flex tubing, statuettes replacing minifigures, and perhaps the funniest and most appropriate detail is the microscale Elderwand represented by a minifig-scale wand now grasped by the formerly-larger-than-life figure of Death.

I suppose the only question I’m left with is whether Aaron will attempt this scene in yet another scale in the future?