If you are granted a wish by Death itself, does that count as a deathwish? Even though it probably does not by definition, The Tale of the Three Brothers sub-story in Harry Potter and the Deathly Hallows does indeed (spoilers!) end in death. Aaron Newman Has taken inspiration from this story to build this symbolic recreation. 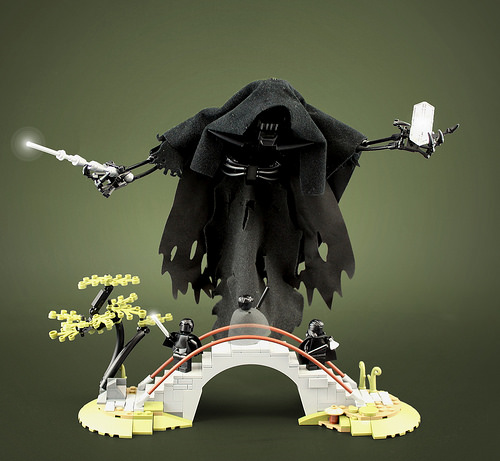 The landscape is just enough to represent the setting, with the focus on the composition and the large figure of Death. Using monochromatic expressionless minifigures is always a sure way to shift the viewer’s attention to the symbolism and the thought behind the build, and Aaron has used this to full effect. Death itself is especially imposing, as it should be. The few features that can be recognized through its black cape are amazing, most notably the teeth that are made using dark gray clips, carefully shadowed to look like fangs. This is not the only presentation trick to bring out the most from this build; take a look at the minifig in the center, which has been partially photoshopped to appear as though it is really wearing a cloak of invisibility.