To celebrate the biggest LEGO Harry Potter set of all time — 71043 Hogwarts Castle — The Brothers Brick is hosting a “Microscale Magic!” building contest. We want to see your most creative microscale LEGO builds of anything from the Harry Potter universe. Build whatever you like – perhaps your favorite location, creature, character, or classroom. But beware wizardy builders – anything you put together has to be in teeny-tiny microscale!

There are magical prizes to be won, and the builder who is crowned MASTER WIZARD will win the massive new 71043 Hogwarts Castle LEGO set! 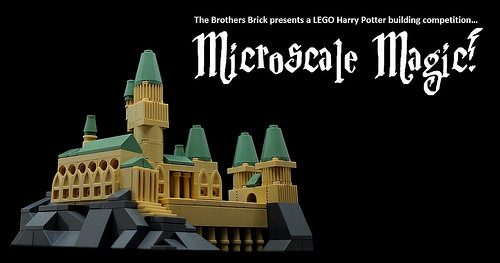 There are two building categories: BIG and SMALL – BIG being landscapes, large buildings, and scenes with a footprint bigger than about 16×16 studs, and SMALL being everything else. Builders choose which category to enter their creation into.

The Rules:
No under-18s, sorry.
No rendered models.
No custom stickers.
No clone bricks.
Fancy photoshopped backdrops to images are cool, but the emphasis on judging will be on the quality of the model.
“Microscale” generally means smaller than minifigure scale. If in doubt, make it small.
Unfortunately due to shipping restrictions, we can’t accept entries from builders in Russia and mainland China.
TBB reserves the right to provide alternative prizes of similar value in the event shipping to the winners’ country of residence proves impractical.

Entries:
Put one photo (that’s ONE PHOTO) of your model in the competition’s Flickr Group pool, before midnight Sunday Sept 30th.
Please also post the photo in the appropriate category’s Entry thread in the Group discussion.
You can enter as many times as you like, but let’s concentrate on quality over quantity.

Judges:
The contributors to the Brothers Brick will be judging. They may build stuff in the theme of the competition for fun, but obviously they can’t win.

Questions:
You can ask questions in the Rules thread in the competiton’s Flickr Group, but it’s not really a big rules-and-regs kind of thing. Just build something from Harry Potter that’s microscale – and have fun!