You’ve probably never seen the Golden Gate like this before – so minimal and so orange. Simon Liu really gives us the essence of the iconic bridge down at micro-scale with this LEGO model.

Liu renders San Francisco and Marin County using a variety of light brown slopes and tiles. The star of the build – the bridge itself is comprised of 1×4 tiles, minifigure hands, and binoculars all in a lovely orange color; the use of these parts is clever indeed. The micro-build as a whole sits on some trans-clear blue tiles, which serve as the strait connecting San Francisco Bay and the Pacific Ocean. Although it is a minimal micro-scale build, this model certainly conveys the idea of the revered structure very well.

Although Sad Brick’s War of the Worlds diorama occupies a tiny base plate, it still packs in some serious detail and a sense of scale completely at odds with its diminutive size. It’s one of the perpetual ironies of LEGO building, that working small creates some of the best representations of physically huge vistas. 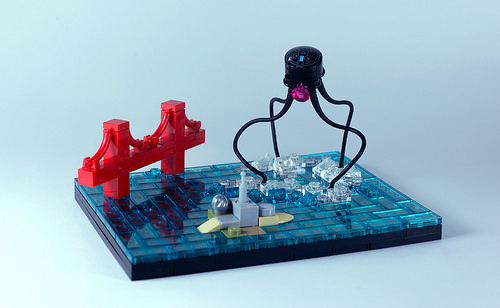 A few rotated and misaligned transparent cheese slopes become a broiling ocean, unbelievably hot dog sausages are reimagined as the suspension arches on the Golden Gate Bridge – a design adapted from builder Li Li’s brick-topper badge for Bricks by the Bay 2017 – and a minidoll syringe doubles as Alcatraz Island’s watchtower. Setting the scene for one of the littlest, and best, brick-built aliens I’ve seen, to cause havoc in.