Canadian LEGO builder Jason Corlett says that this LEGO Quarian Cruiser from the Mass Effect franchise is the largest ship he’s ever built. And while that’s not hard to believe given the sheer immensity of this vessel, the real skill is how Jason has packed all 68″ with excellent detail and shaping. I look at this ship in its entirety and I see all the small choices made by Jason during construction: the fit of the beveled ring into the other parts of the Cruiser, the pockets of detailed textural work in specific corners, the decision to cover a stud with a tile or leave the stud exposed, even the determination of whether a part should be light or dark gray. All 68 inches of the model feel consistent and deliberate. And, trust me, that’s hard enough to do for even the smallest builds!

And that’s just focusing on the main hull of the ship. Each of the containers on the Cruiser’s aft tail is uniquely detailed, but still fits into the overall feel of the build.

Dipping into the Mass Effect lore, all these design choices take on new meaning. The Quarians are a migrant people, living almost entirely on these ships for generations. Over that time, a Cruiser is continuously repaired and modified to meet the needs of its crew. Its age shows more and more, year after year, until it’s finally decommissioned. 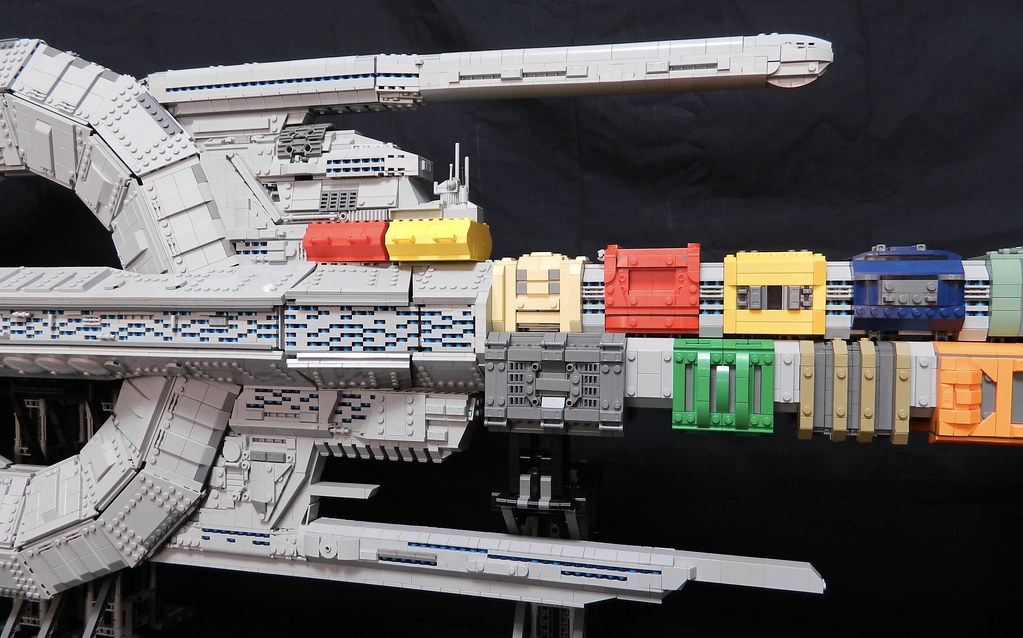 As Jason makes all these small design decisions in LEGO, he’s putting an age on this starship. He’s giving it character and a purpose, making the build come alive. And he’s revering the subject-matter in the same way its fictional crew would. It’s truly awe-inspiring, and an absolutely stellar build!