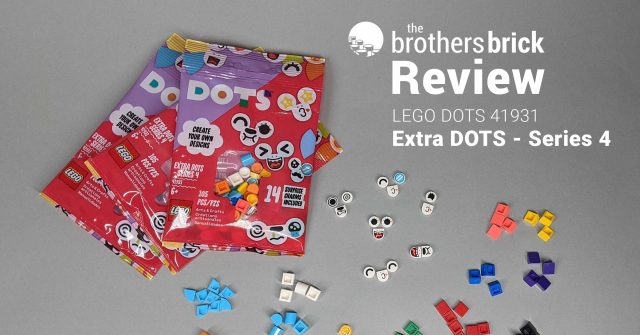 Extra DOTS Series 4 packs have a listed part count of 105, including 14 “surprise charms.” Unlike the Collectible Minifigure blind-bags and the new VIDIYO blind-boxes, Extra DOTS bags have a clear window in the front of their packaging that lets you take a look at what’s inside.  That means the “surprise charms” are only a surprise if you’re ordering on-line or don’t feel like spending several frustrating minutes shaking the bags to try and get a good peek. 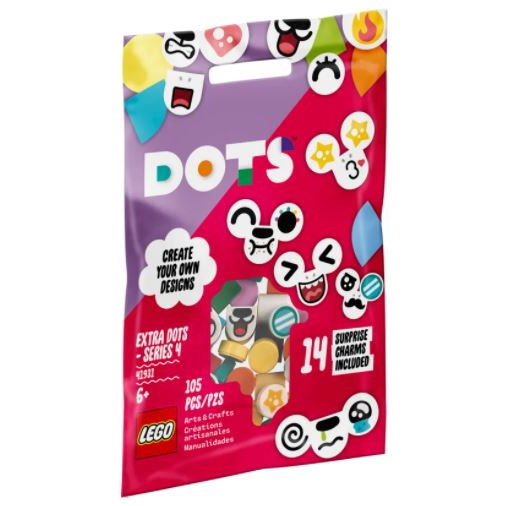 LEGO is known for occasionally “overfilling” on small parts. For example, if a set is supposed to come with five 1×1 round plates in green, often you’ll get six. It’s a nice “just in case a part rolls under the couch” perk, and it works out very well for things like the Extra DOTS packs. The package lists a part count of 105, but you’ll actually get 120.

The product description on LEGO.com currently reads
This great bag features 105 colorful pieces, including cute animal eye and mouth tiles, ear and paw bricks, colored tiles and 10 mystery tiles from a range of 16 possible decorations – what’s in the bag is a surprise!

We’ll start with the “ear and paw bricks” part. Those are likely these cheese wedges and 1×1 bow plates. They match up with the way ears and paws are built in the new DOTS Bag Tag sets, anyway.   The colors and quantiles for those elements break down like this:

The rarest piece in this group is the medium azur bow plate. It only has one other appearance, in 43189 Elsa and the Nokk Storybook Adventures. 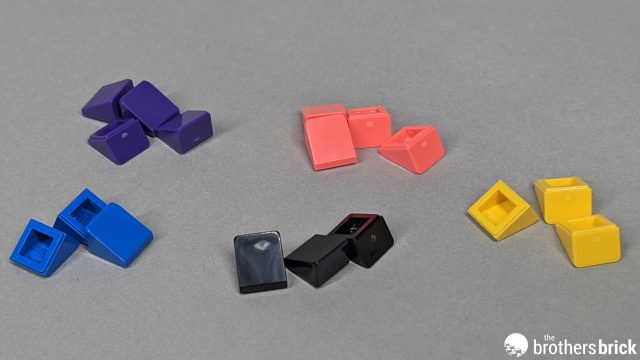 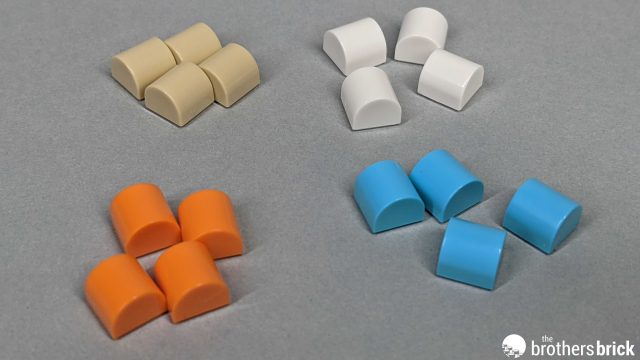 Moving on to the “colored tiles” there’s a good mix of round and half-circle varieties. The breakdown here is:

The bright yellow round tiles are unique to these Extra DOTS packs. The half-circle pink tile only appears in one other set, 41446 Heartlake City Vet Clinic. 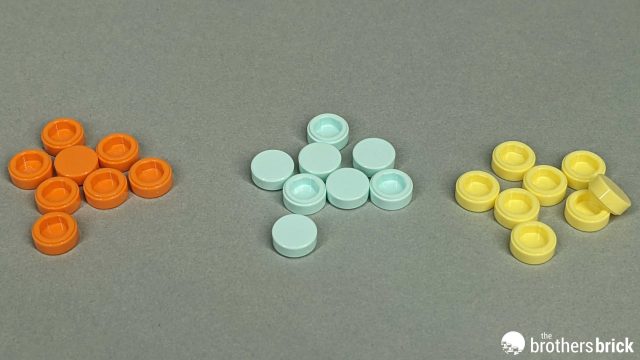 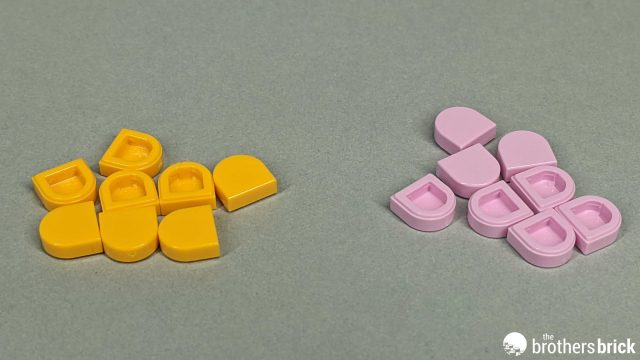 Finishing up the unprinted pieces are standard square and quarter circles tiles. None of the parts in this group are rare, but they’re useful colors in useful quantities so there’s no reason to frown. 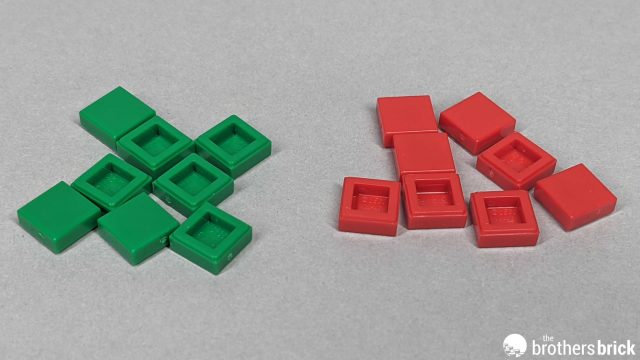 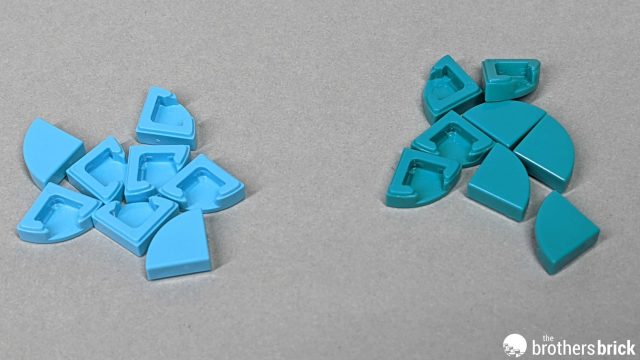 The main “collectible” draw of these packs are the printed tiles. Series 4 deviates from the pattern we saw in the first three collections. Each pack has 9 eye (round) tiles, and 6 mouth (1/2 circle) prints. (The official inventory lists 9 round tiles and 5 of the 1/2 circles, adding up to the 14 “surprise charms” listed on the package.) As both pieces draw from a pool of possible tiles, there’s a lot of randomness possible in these packs.  Due to purchase limits, I was only able to pick up three packs, so my sample size is obviously very limited. Still, I think we can make a pretty good guess as to the complete list of printed tiles.

It’s likely there are 16 different eye prints, matching the 16-design counts from previous Extra DOTS series. They are joined by a likely set of 8 mouth prints.  My three packs didn’t have all of them, but the packaging shows the four likely remaining prints. It would be great if only three packs got you this close to a complete set. If anyone has found tiles that I haven’t shown here, please leave a comment and let us know! 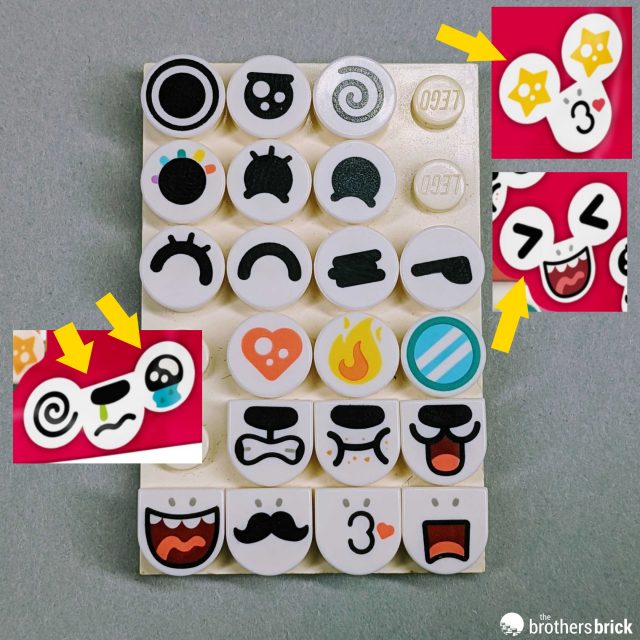 When it comes to comparing these tiles to previous series, they feel a bit weaker as “charms”. They’re clearly meant to be used to construct faces and characters; something that I think will be more widely useful to fan builders. But I’m probably biased.  I still think the first series (seen at far left) are the most fun, but this latest series is a strong second. 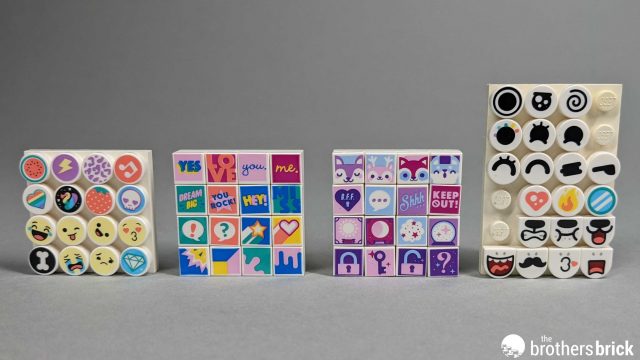 I wasn’t super thrilled with Extra DOTS Series 3, but Series 4 is a huge improvement. There’s a great range of parts in a wide range of rare colors and the printed tiles have great designs. At $3.99US for 105 (really 120) pieces, the cost per part is around 3 cents, making these a great value if you’re looking for detail elements.  These also feel like good “booster packs” to enhance the animal-based DOTS sets in this wave. The eyes and mouths here can really let you customize those critters to make more personalized versions. If you’re a parts junky like me, or just like cute things, these packs are a great low-cost LEGO treat. 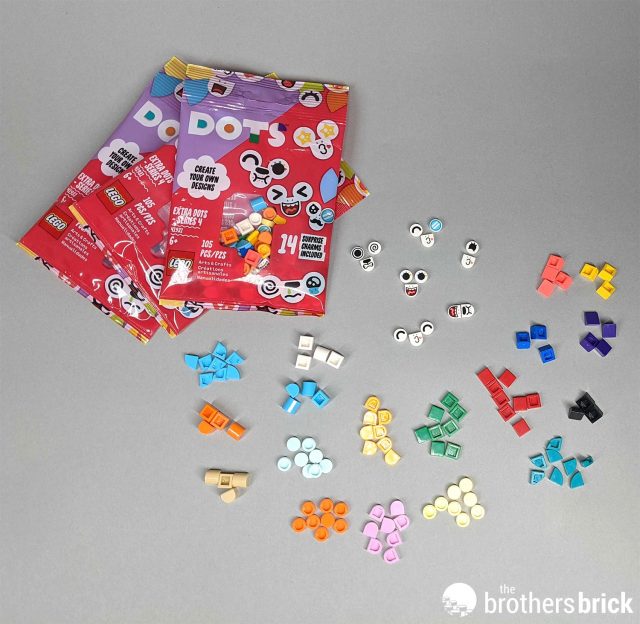 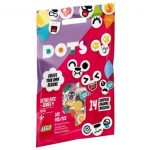 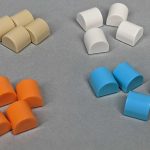 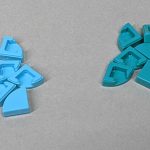 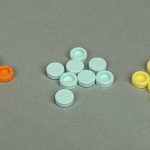 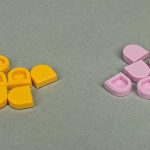 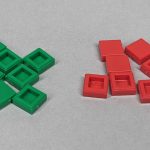 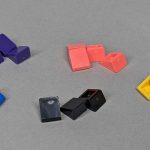 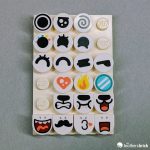 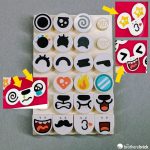 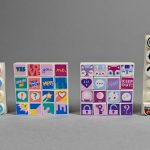 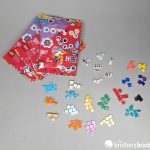