LEGO’s latest retail catalog is giving us a look at the new LEGO Ninjago 71741 Ninjago City Gardens. 2021 marks the 10-year anniversary of the Ninjago theme, and LEGO is celebrating by releasing the theme’s biggest ever set. The 5,685-piece set is the third in the Ninjago City series spawned by The LEGO Ninjago Movie, and brings gardens, a shrine, arcade, Ice Planet Ice Cream Shop, a Ninja Control Tower, and more to the modular city, along with a plethora of minifigures. The set will be available starting Jan. 14 for members of LEGO’s free VIP loyalty program, and for everyone on Feb. 1. Once available, it will retail for US $299.99 | CAN $399.99 | UK £274.99. 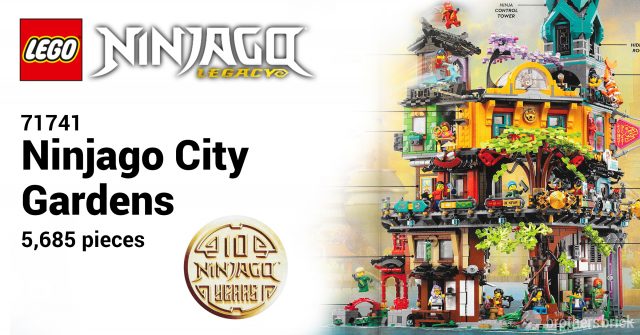 The company hasn’t revealed the set online yet (update: see more of Ninjago City Gardens here), but it seems the printed January 2021 catalog shipped early to some customers. Ninjago City Gardens will have a huge footprint spanning one and a half standard baseplates, with the tower peaking out at 29 inches tall. The catalog touts 19 or 20 minifigures, but we count 18 plus two non-traditional figures: a Scoop the robot and Sensei Wu’s dog. Like some other 2021 Ninjago sets such as 71736 Boulder Blaster, it will include a special “Limited Edition” golden minifigure: Sensei Wu in this case. And just like the previous Ninjago City sets, the three-tiered model will feature quite a few small locations: 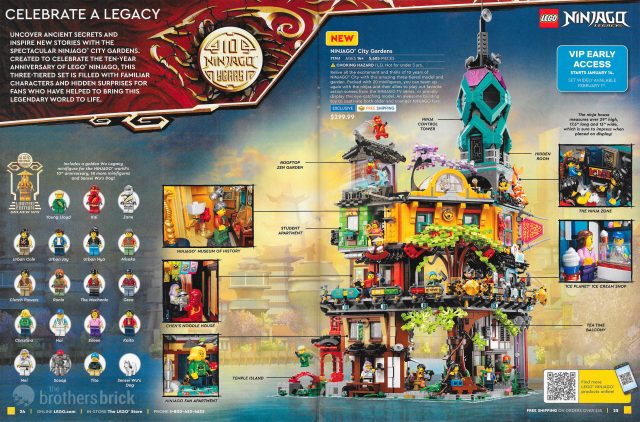