In this rather solemn LEGO mosaic by Jaap Bijl titled “Einstein’s One Great Mistake”; a more serious topic is explored – Albert Einstein and his role in the Manhattan Project. If we’re going to get artsy here, I would even say that the color palette and aesthetic of this build are reminiscent of Picasso’s “Blue Period.” 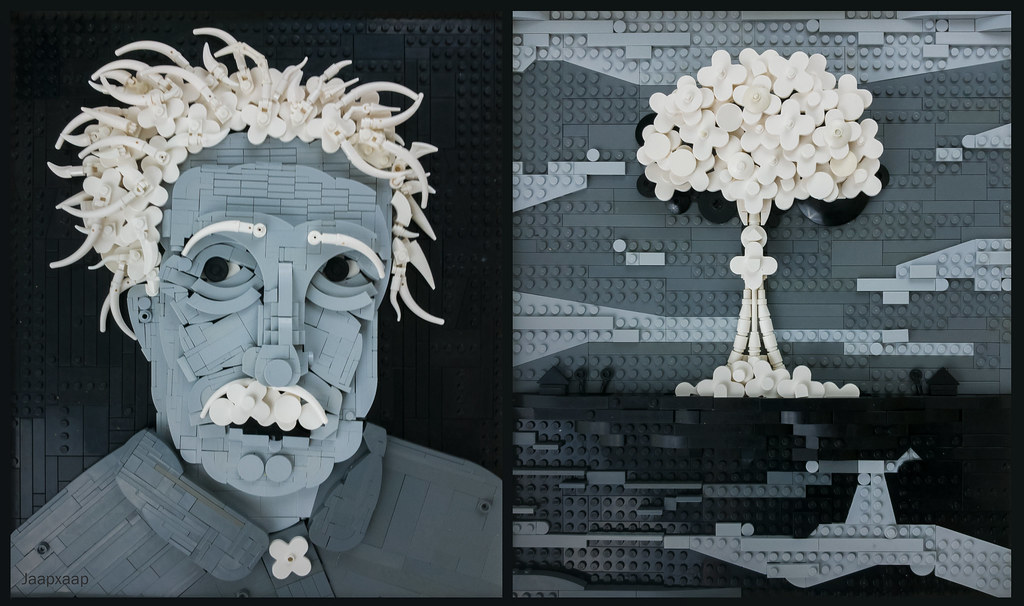 The 4×4 petaled flower element is back in multiples, this time in an ominous arrangement forming a mushroom cloud – the shape generally synonymous with nuclear explosions. The rest of the scene in the right panel is formed with various sized plates and tiles in dark hues with white 1×1 round bricks and cones creating the stem of the cloud. A portrait of Einstein is presented in the left panel; his face is carved out of various bricks, slopes, and tiles, for the most part utilizing the SNOT (studs not on top) technique. Einstein’s notoriously unruly and spiky hair is rendered by a synergy of the white 4×4 petaled flower pieces and white dinosaur tails. In terms of composition, although this work could be called a mosaic, it differs significantly from the new LEGO Art mosaics which are comprised mostly out of 1×1 studs. For me, Einstein’s hair and the mushroom cloud both being heavily composed of the petaled flower elements represents a kind of mirroring effect, but I could be looking too deep into this. Either way, I think it could be said that this build is genuinely thought-provoking.

2 comments on “When science and (LEGO) art collide.”