Hide your droids! Hide your ship! Or else the crew of this massive LEGO Sandcrawler built by Walter Whiteside will scrap and sell them in exchange for breakfast, maybe a nice mudhorn egg. As always, it is great to see a mashup between Star Wars and LEGO’s Classic Space theme. This time rather than a flying vehicle we have a brilliant blue Sandcrawler, but given its classic space look, I could see this mobile fortress making its way across a sandy and cratered moon. 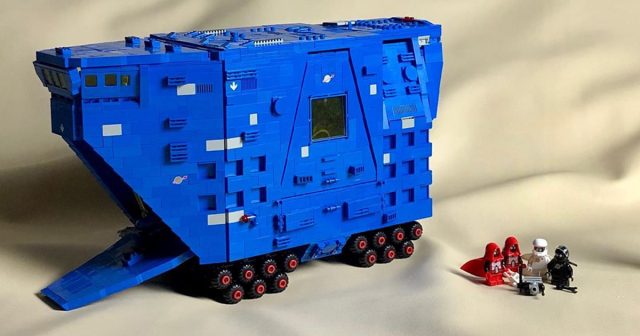 While Walter’s build is extraordinarily accurate to the original Star Wars concept in shape and with the inclusions of the side windows, bay door, and even the trapezoidal caterpillar tread it still boldly maintains a character of its own with its space blue composition and popping accents achieved with the incorporation of some light grey bricks and red rims. 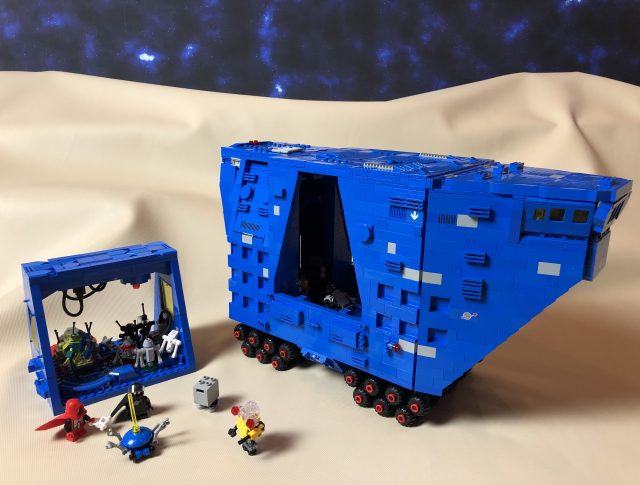 The cargo area of this vehicle is even removable and features many little droids utilizing some vintage printed tiles, translucent studs, and other hallmark Classic Space elements. Of course with a build so large, he also includes many interior spaces such as a control room and more cargo space behind the bay door.

Walter really outdid himself with this massive and quite detailed build. He has mentioned on his Instagram page of the possibility of doing an M-Tron or Blacktron version of the same build, that certainly would be something a lot of LEGO fans would want to see.