Seismic communication? In my Federation? It’s more likely than you think. The Brick Artisan has created a LEGO Heavy Communications Rover that overcomes planetary dust and electrical storms with the power of vibration. It’d take a scientist to explain that, probably. Meanwhile, we can marvel at that intricate radar dish construction. There’s everything in there from minifigure jackhammers to battle droid torsos. The overall shaping of the rover reminds me of the old Rock Raiders theme, or the even earlier 6950 Mobile Rocket Transport, which isn’t too shocking considering the wheels and fenders were likely sourced from the Rock Raiders line and the canopy pieces from Classic Space — those three interlocking yellow windscreens take this build to another place entirely. 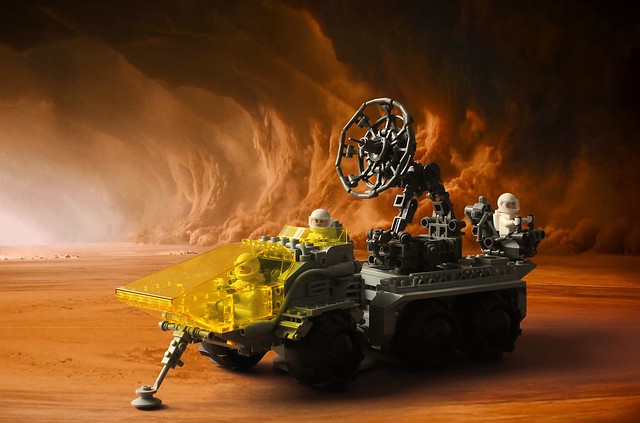 Speaking of Rock Raiders, how many of you first thought you were looking at a cave interior as the background here? I sure did. But that’s actually a still from Fury Road showing a massive dust storm. It still works for this creation’s backstory, but it sure felt weird to realize that. Anyway, if you want to see even more details of this clever build, check out this unedited shot.