Sometimes I wish I was born sooner, but if I were I might be soiling adult diapers and yelling obscenities at the TV by now, so I’m fine being the age I am, all things considered. Had I been a bit older though, I would have seen this whole “Showrod” phenomenon first hand. Showrodding pioneers such as George Barris, Ed “Big Daddy” Roth, and Tom Daniel (of Monogram Models fame) changed the definition of what a car could be with their flamboyant, over-the-top showstoppers. Certainly there is still car customization going on nowadays but nothing matches the heyday of the Showrod phenomenon in the 50s, 60s, and early 70s. There are very few car builders on the planet building this style of Showrod and even fewer people creating them in LEGO. One such LEGO artist, however, is Andrea Lattanzio who has replicated Tom Daniel’s “Paddy Wagon” with masterful build techniques and stunning photography. 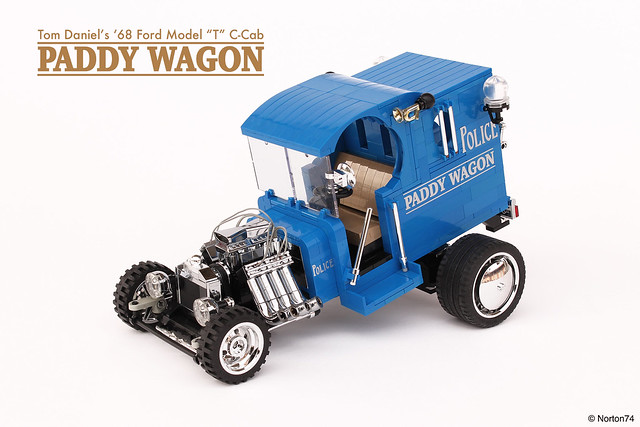 To say I am impressed by this would be an understatement. I think the correct words I’m looking for are awestruck and quite a bit humbled. Everything from the C-Cab’s signature profile, to the gleaming custom chrome bits to the aggressive stance to its superb clean backdrop, even the font used are all the mark of an artist with a profound knack for presentation. With what looks like houses reflected in the rear hubcap, it would seem Andrea’s secret to stellar presentation involves, at least in part, natural outdoor lighting and a clear day. 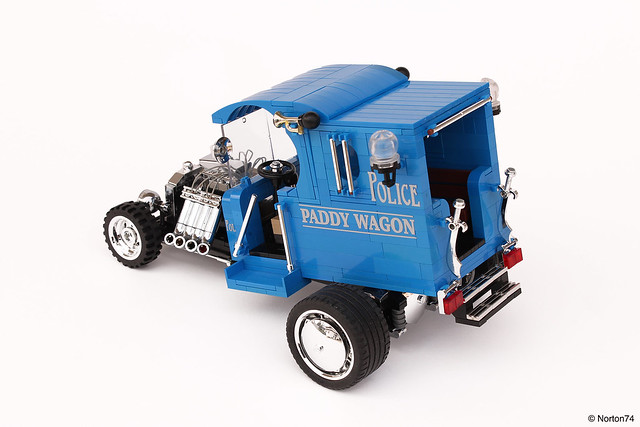 Now I’m sure most of us are aware that the term “Paddy Wagon” has some unsavory connotations to it, particularly for Irish-Americans. The Oxford Dictionary states that the term originated in the 1930s but some theories cite the term going back as far as the 1840s or 50s. One can argue that much of the police force employed, particularly in the Boston and New York areas, were of Irish descent and thus the police vans they drove were deemed “Paddy Wagons”. However, the term was born in a time when the Irish were discriminated against in the US and according to some accounts the majority of people being transported by police were poverty-stricken Irish-Americans acting out against their destitute conditions with intoxication and belligerence. You’d think the slur would be a product of our distant past but sometimes a term just sticks. As recently as the 90s, the LAPD set up a well-meaning program that would safely transport drunken revelers home on St. Patrick’s Day. The police van used in this program was happily dubbed the “Paddy Wagon.” They even set up a phone number for people who needed to ask for rides: 1-800-80PADDY. After a few years and several complaints from the Irish community, the police wagon was renamed “The Party Wagon”.

The point to telling you all this, I guess, is this; to not acknowledge the slur at all would have been odd, so writing about it with care and respect seemed like the best course of action here. This should not detract from Tom Daniel’s legendary Showrod or from Andrea’s masterful rendition of it. Hot-rodding in general can be a bit lowbrow at times. Here’s my own drunken foray into another one of Tom Daniel’s designs. An interesting note on that is Andrea had also built a much cleaner version of Tom Daniel’s Beer Wagon but my research indicates that it did not make it onto The Brothers Brick, though it certainly deserved it. I want to reiterate that I respect and admire Andrea’s work nonetheless. To make up for it, here’s a previous time that Andrea dazzled us with a fiery hot Showrod C-Cab.

2 comments on “If this is my ride to jail then sign me up!”