The latest wave of Jurassic World sets are based off the new LEGO TV series, Jurassic World: Legend of Isla Nublar. Most of them have already been on the shelves since spring, with this exception: 75938 Jurassic World T. Rex vs Dino-Mech Battle. While the set has, in fact, been on shelves in other parts of the world since the beginning of June, it’s making its North American debut on August 1st. Whether you’ve seen this one around and couldn’t decide whether or not to get it, or if you’re learning about it for the first time, we thought we’d take a look and share what we’ve discovered! The set has 716 pieces and retails for US $89.99| CAN $119.99 | UK £79.99. 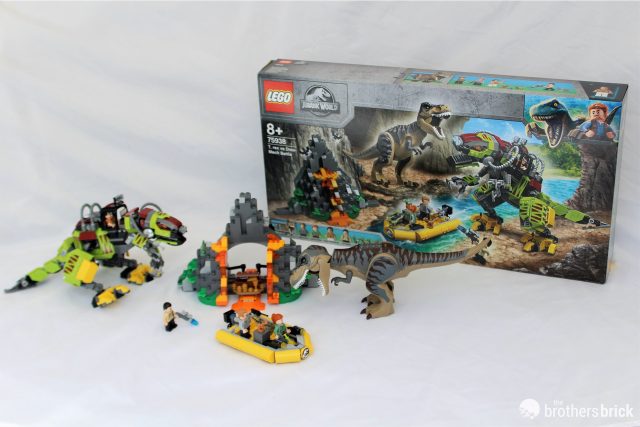 The box contains 6 numbered bags, in addition to 3 rock elements, separately packaged T. Rex parts, two instruction books, and a sticker sheet. Alongside many other attributes, one of the awesome bits about LEGO packaging is that the characters’ names are all listed right on the front of the box. So if you like the look of the set but aren’t very familiar with the Jurassic World universe, you have a handy identification key! 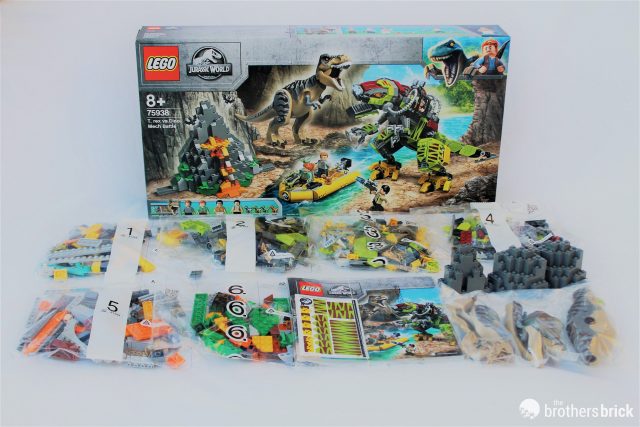 For those of you who hate stickers, you’ll find that this set, unfortunately, has a total of 21 of them. But depending on how you look at it, you might find their repetitive nature and ability to be used in other cool ways is actually a win! They are even reminiscent of the decals from the original SUVs.

The two instruction booklets cover different modules in the set. The first refers to the large Dino Mech and raft boat while the second one refers to the volcano. Our copy came with a minor error in the first book. (On the 10th step of the raft it calls for a part that isn’t used until the 11th step) Other than that there is not a lot to say about the build process, as it’s pretty standard fare for LEGO. That said, the spoilers used to shape the legs of the mech were a great idea. So was the trans-orange tooth element placed over a yellow plate to achieve the look of glowing eyes. 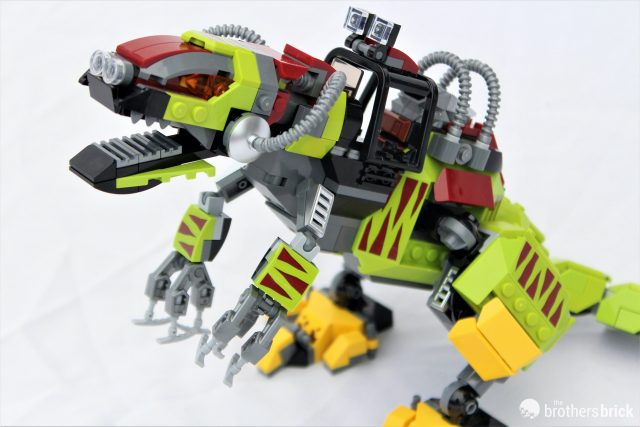 Imagine taking the extra parts from every set you own and saving them in a jar, the same way some people do with pocket change. After a while (short or long depending on how often you buy sets) you will probably have enough to build something pretty rad. Extra parts are often unsung heroes, and this batch is especially cool. Lots of small pieces means lots of extras, and that includes all the gems, a can top, an icepick, and a syringe. A fun one we’ve seen before is the inclusion of a metallic silver radar dish, which is a huge win! 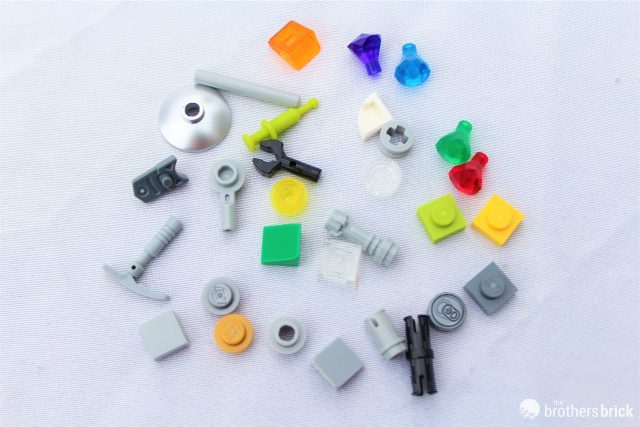 The set’s namesake dino mech is a worthwhile build on its own and the scale matches the pre-molded T. rex very well. Posability is naturally far better than that of the “real” dino though, with flexible joints used on all the appendages. It’s also pretty sturdy in general, with its strongest points being the head and massive chicken-like thighs. Those things are chunky (in a good way)! On the downside, the toes fall off pretty easily. The arms are also a little odd. Thin at the shoulder with thick forearms and gangly, awkward icepick claws just doesn’t feel quite right. The tail is made to be sturdy with the segments connected by stacked ball joints. Unfortunately, that means it is mostly only moveable side to side, except for the point where it meets the body and has a vertical hinge. 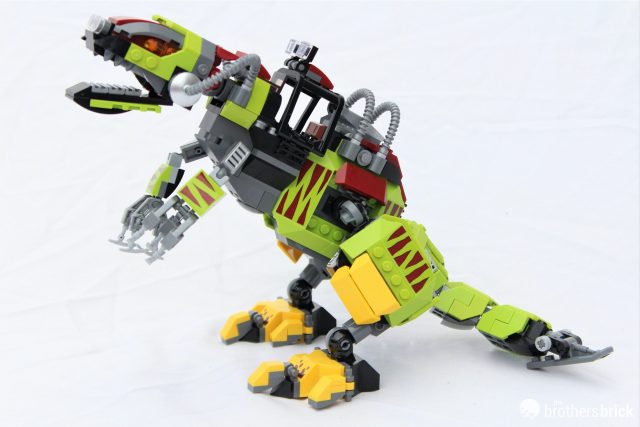 The volcano has a cute concept, as the sides slide open to reveal a treasure chest in the center. It also has a lovely use for Queen Whatevra’s crown, appearing in this instance as a broken/hatched white egg, the same technique we liked in the recent T. rex Rampage set. It’s mildly disappointing that LEGO chose to use the Big Ugly Rock Pieces (commonly called BURPs, or in this case, 2 MURPs and a LURP) instead of more diverse bricks to create the volcano. But you can’t really blame them for both trying to keep the cost down and catering to an 8+ age range. The hollowness also helps to hide the treasure chest as well as the dino eggshell. 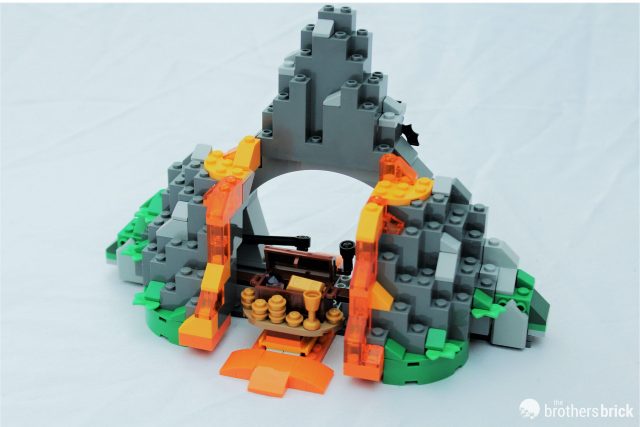 The volcano as a whole is a bit fragile. Although the looping gif below shows a relatively smooth transition, it took several attempts to do without breaking it. The simple mechanism can be quite smooth, but you need gentle hands (not ideal for the kiddos). Pulling one side at a time while using the other hand to hold down the front causes uneven pressure and strain on the other side, sometimes resulting in breakage at the slides. Likewise, pulling both sides without holding the front requires a small amount of force to keep it in place, but it’s that force that sometimes makes the build fall apart. It’s hard to say if the solid but lightweight rock pieces are better for this reason, or not. Ultimately it’s safest to only use the slide mechanism itself to push the treasure in and out.

In our opinion, the all-star of this set is the boat. While pre-molded MURPs were used in the making of the volcano, the designers didn’t settle for a simple single-mold boat element this time, even though one exists. Instead, they gave us a truly excellent little brick-built raft. 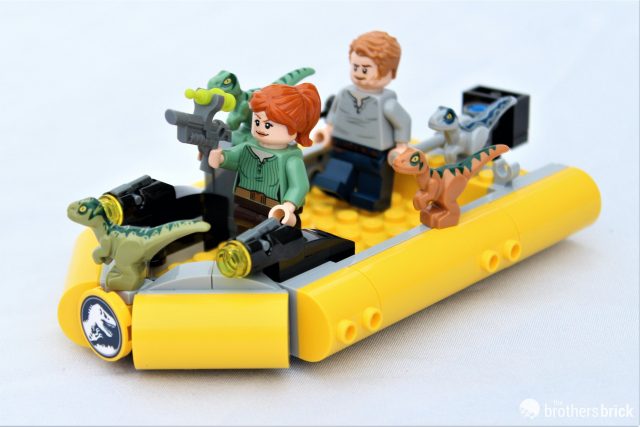 The spacious vehicle comes with ample room to comfortably fit a few minifigs and gear. Amenities also include clips for holding that gear, front-end stud shooters, and a crate for containing extra ammo. The logo looks great on the front, even though we’re still bummed that it’s not a printed tile. 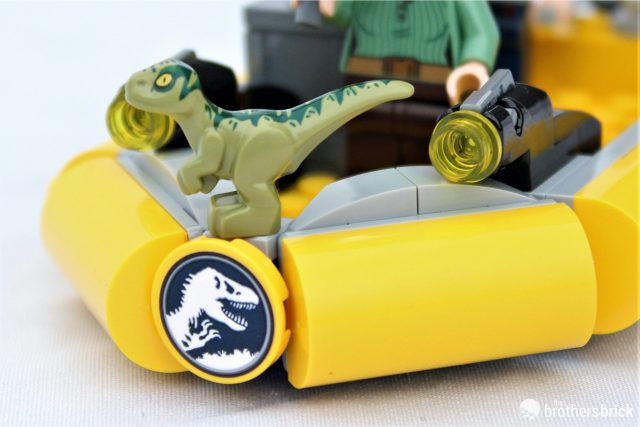 The one critique might be the motor. It’s sturdy and the design is clever at first glance. The height is convenient and the connection points allow for a fair bit of movement. But if you look at it for more than a second you begin to realize that the actual motor part isn’t all that great. The inverted 1×2 brick with axle hole may have been the best way to accomplish the mounting of the base, but the open top is more reminiscent of a coverless toilet tank than a motor. Additionally, using the steering wheel for the rotor was a cool choice, but realistically it seems too small. It’s more like a little electric motor than an epic adventure propeller. 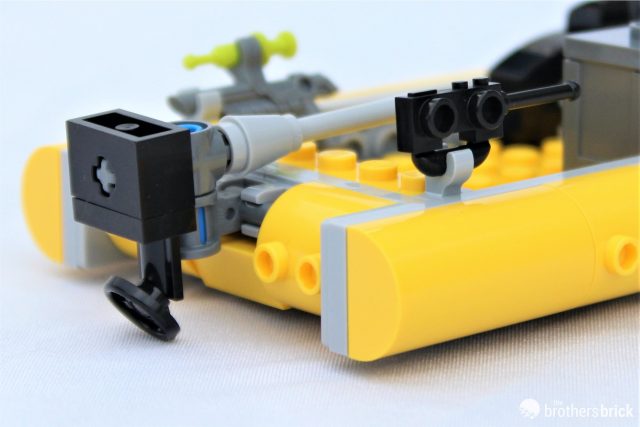 The regular figs are interesting for being somewhat unique to this set (or only a couple sets). For example, Owen Grady and Clair Dearing have previously worn a printed vest and jacket respectively. This time neither article is present. The accessories also include two guns, a walkie-talkie, and a can of soda. 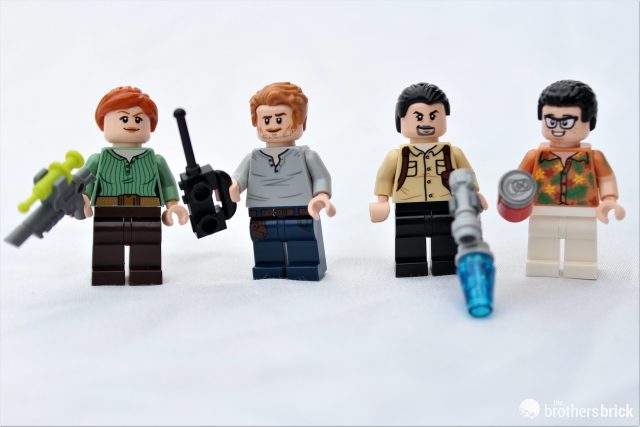 As mentioned before, the torsos of Owen and Clair are unique to this set. Both have dual printed faces. On one side they both have smirking smiles with a single raised brow and on the other, she has a scared look while he has a concerned/determined expression. 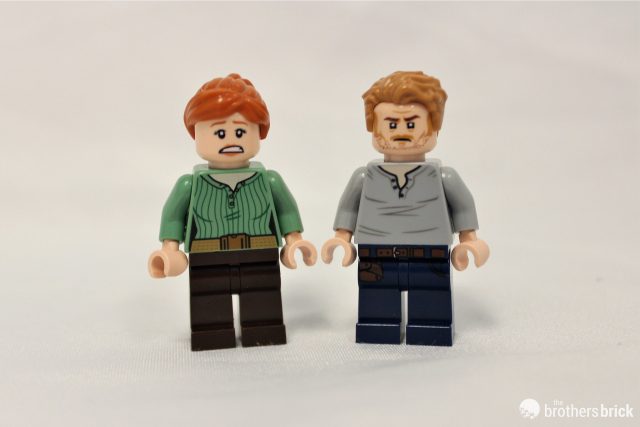 Who is Danny Nedermeyer? This LEGO-created character is Dennis Nedry’s nephew of course! Can you see the resemblance? And apparently he is as nefarious as his uncle (the Dino-mech is his evil doing). Although the face on the other side of his dual-sided head is more like the face Dennis had right before he met his demise. But Danny’s one-of-a-kind Hawaiian shirt sure is lovely! Vic Hoskins, on the other hand, was already part of the Jurassic World universe as a secondary antagonist. He has been seen before with gray hair instead, which makes sense because this new LEGO TV series is actually set a few years prior to the latest live-action film that the other fig was based on. The creases of his torso are also very slightly different from the previous version. 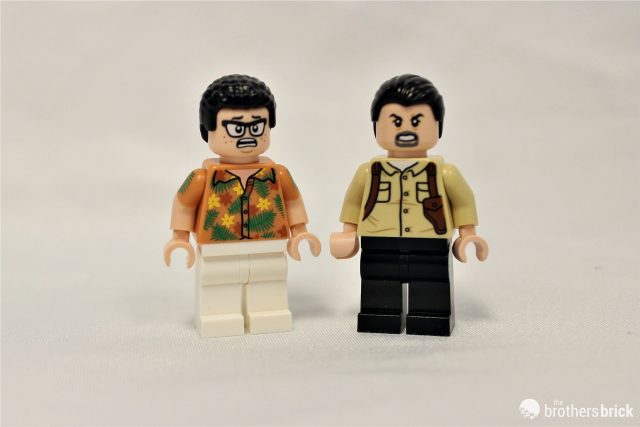 Now the dinos are where the real party starts! Animals are always one of the best parts of any set that uses them, and this one is no exception. Naturally, we get the previously mentioned T. Rex, but there are also 4 adorable babies included in the model! They are Echo, Blue, Delta, and Charlie (pictured in that order from left to right) and even though they have been in other sets as characters, these are all unique to this set for their new prints. 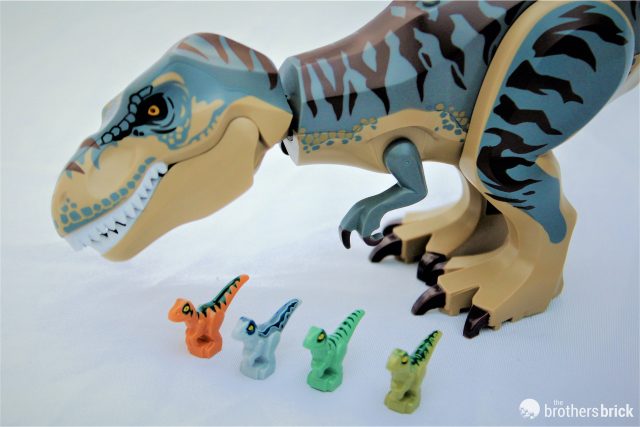 In terms of functionality, Rex is the same as those that came before her (check out all the LEGO Jurassic World dinos from the last wave). The tail, legs, arms, head, and jaw are all detachable from one another. Per usual, the tail has a softer tip to avoid injury. And the whole body is posable, albeit somewhat unilaterally. One thing that’s always frustrating is that, without studs to stand on, the legs have to be positioned the same or the dino will fall over. But what’s special about this particular T. rex is that the print is new and unique to this set. 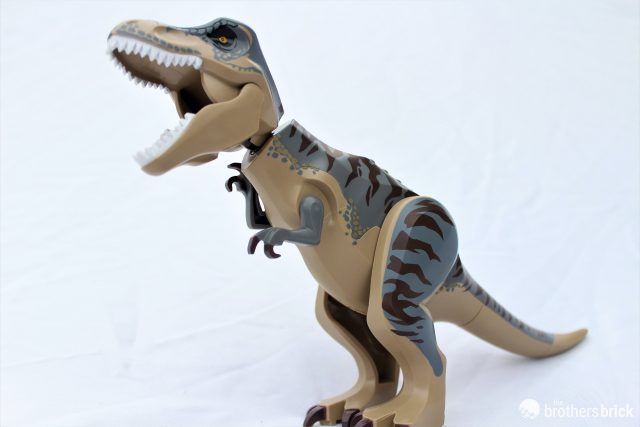 As previously mentioned, the scale works out very well, with the dino and dino-mech standing nearly eye to eye. In a fierce battle the mech would give Rex a run for her money, but we all know who the real winner would be. If you’ve seen any action movie, you’ll know that hoses on mechs are made for tearing out, spewing everywhere, and causing dramatic immobilization. Naturally we can’t expect anything less here… Sarcasm aside, the mech is tough enough to withstand lots of battles with Rex, and once she’s finished destroying it, we’re left with lots of nice parts to play with! 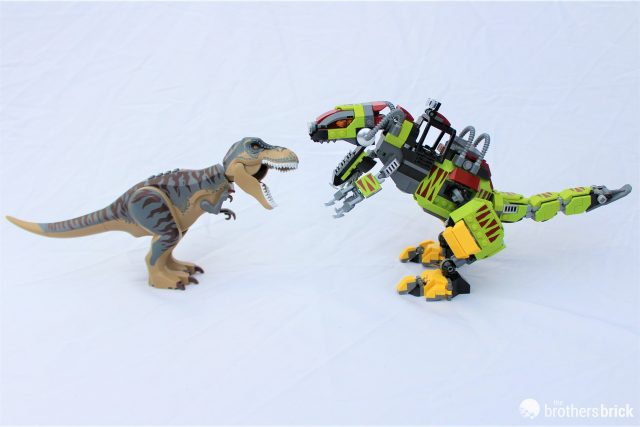 Overall this set is fun to build and play with. There are a few elements that aren’t as sturdy as we had hoped, but in general, it’s not bad. The new prints are always exciting, and the few pieces that are new as recolors are enticing as well. If you want to collect every single dino variant out there, 5 in one swipe is pretty nice too! And that raft is adorable. But the price-per-piece isn’t incredible, though that’s partially explained with the inclusion of the large T. rex fig. On the whole, this isn’t a set to rush out and buy, but if it goes on sale it’s worth considering, primarily for the minifigures and dinosaurs. 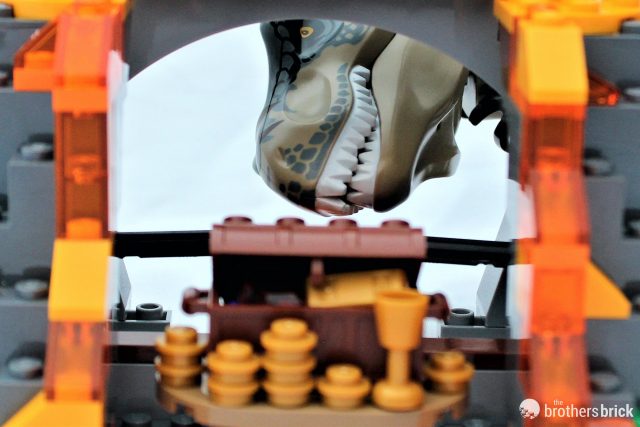 75938 Jurassic World T. Rex vs Dino-Mech Battle is currently available in Europe, and will be available in North America in stores and on LEGO Shop online starting August 1. It will retail for US $89.99| CAN $119.99 | UK £79.99. It is also available via third-party sellers on eBay and Amazon.