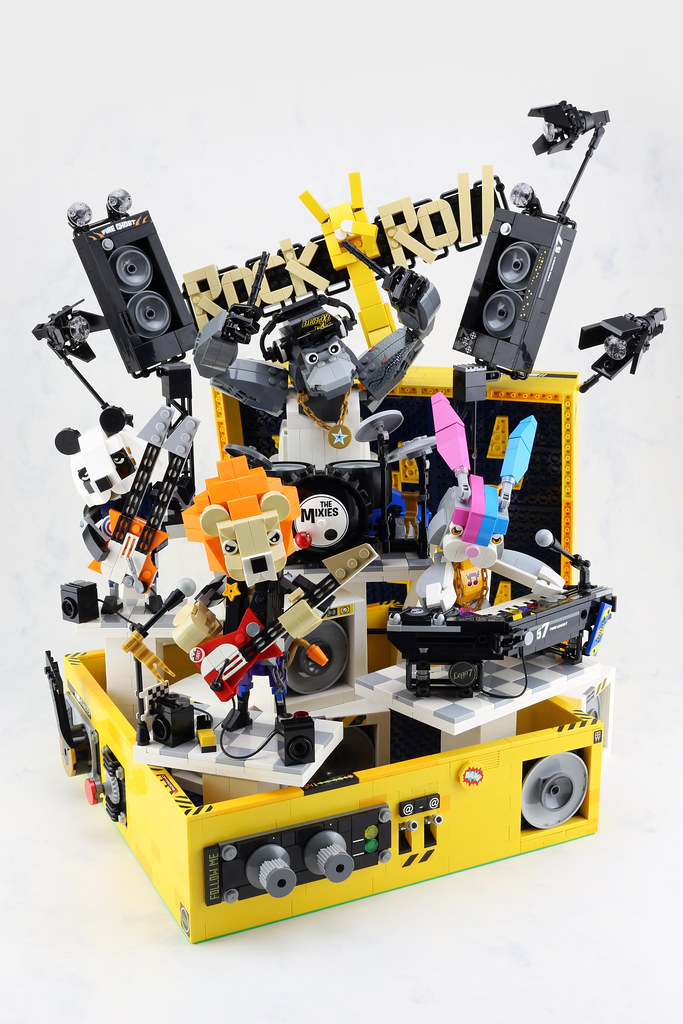 The box has a “Caution: Loud music inside” feel to it, reminding me of the many times I’ve helped bands load into the music venues I’ve worked at. Only this time, the dials are on the outside. The speaker based studs on the top are a really nice inclusion but I think it’s the dials and switches that really steal the show here. I really enjoy the subtlety of the hidden and stacked 1x6x3 bar with studs on either side of the red ignition button. 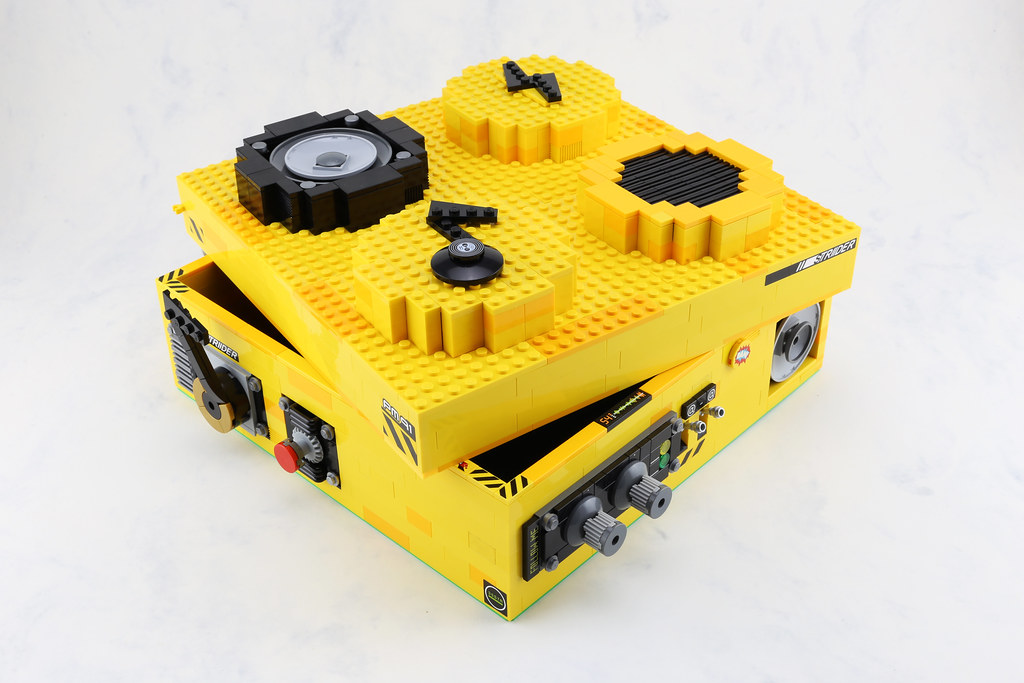 Moving onto the characters, each has there own definite personality and are individually great builds in there own right. LEGO 7’s skill in expressive shaping has given these rock stars standout characteristics. Let’s take a moment to check out each one, starting with the front man. The lead lion in this group, sports an iconic punk-rock look: leather jacket, hip chain and boots. Along with his ferocious mane, he displays a likeness to a combination of Johnny Rotten and Sid Vicious. The tail, made from a elephant trunk tipped with a orange cone, tops this big cat off nicely. Something that I found a challenge to find but was incredibly impressed to see used, was the 2x2x2 Turntable. The two front facing amplifiers in which they are employed, are a genius design. 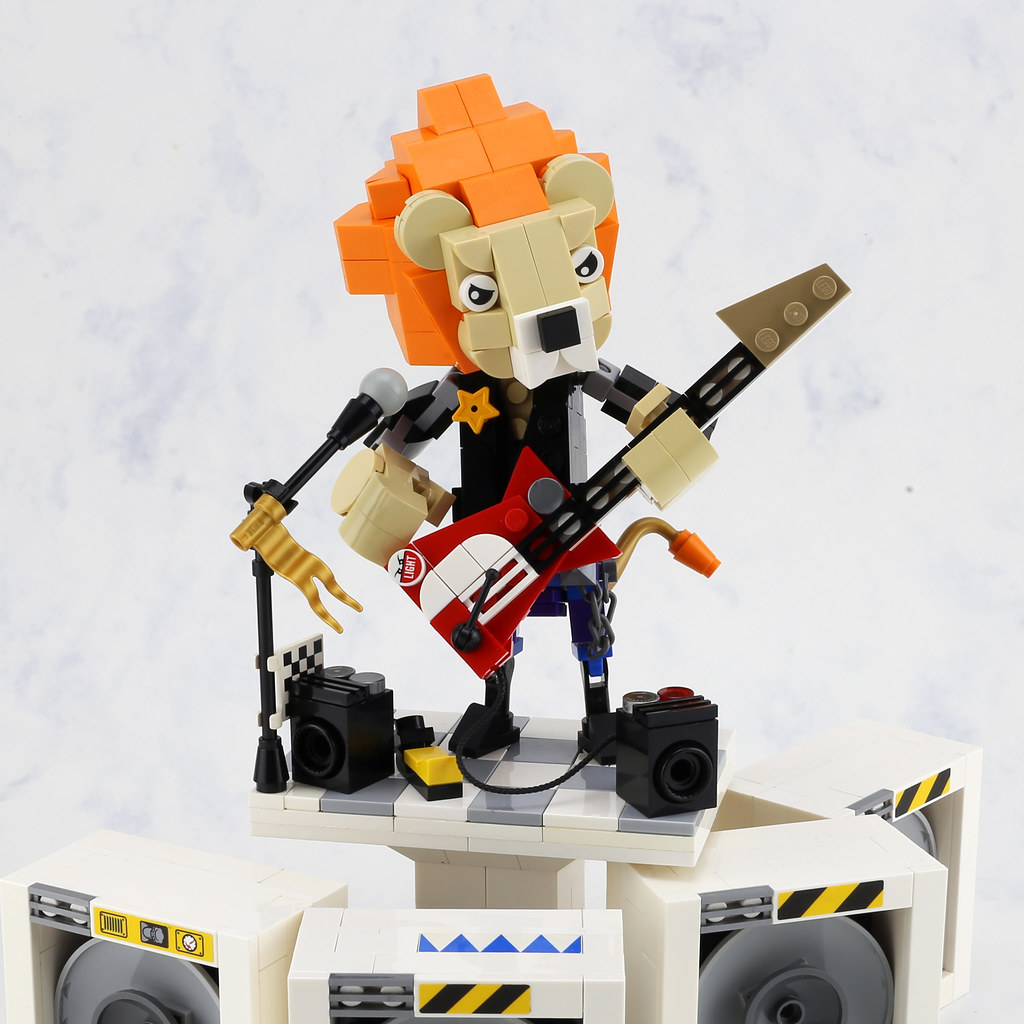 The mix master, synthersizer blaster rabbit is next, his focal point locked heavily on what he’s playing. The use of the eagle eye printed tiles seem perfect to complete his expression of focus. This pink and blue hare holds strong, set behind his mix of cleverly constructed keyboard and turntables. The 1×1 headlight brick and 1×2 technic brick on the back of his music rig make for impeccable input/output ports. Strangely enough though, the part that really brings this home for me, is the 1×4 modified brick with the groove. This piece is as close to a ventilation slot as it comes. 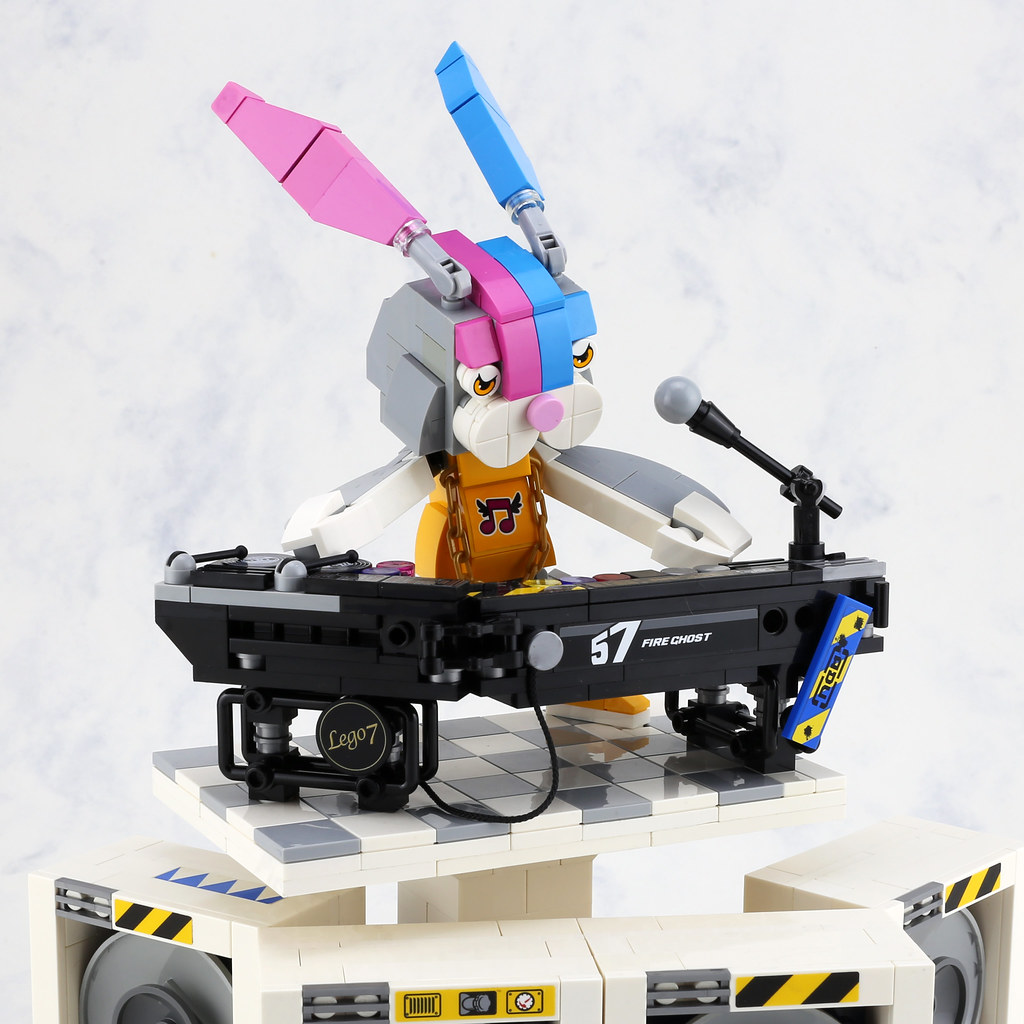 Next up we have the drum-pounding gorilla. This aggressive-looking ape is oozing drummer spirit. From his crocodile half sleeve tattoo made from left and right 6×2 reptile skin printed wedges to his furrowed monobrow, constructed of a minifig handlebar. There are so many great part usages in this guy and his kit, that it’s hard to pick just one highlight. In saying that, the use of black sausages as headphone arms brought a smile to my face. I also like that due to his sheer size, he is sitting on the floor with no stool needed. 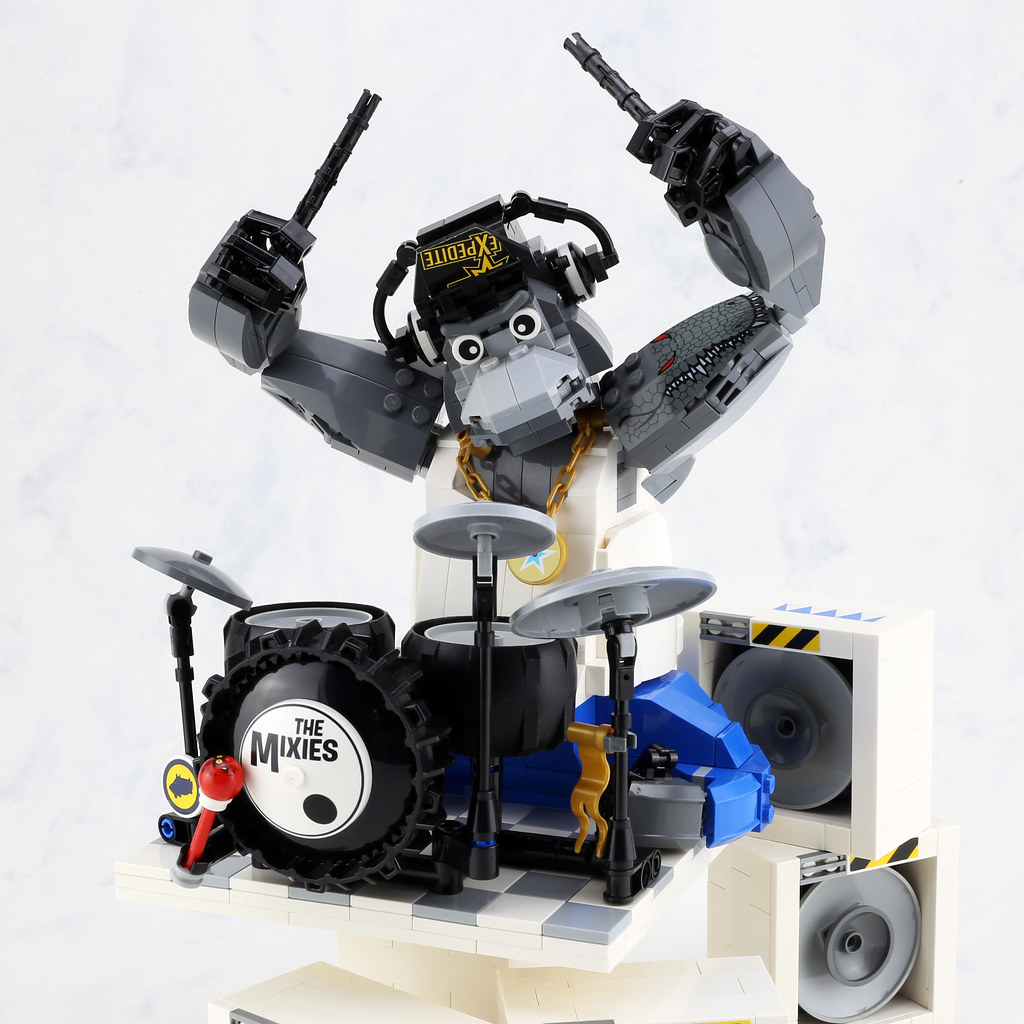 A relaxed and almost sleepy looking panda wields an impressive double neck guitar. Due to the size of his instrument, he is tilting his head to see around it. The minifig utensil ratchet acts as a great whammy bar and makes me ponder what sort of shredding this dozy guy gets up to. 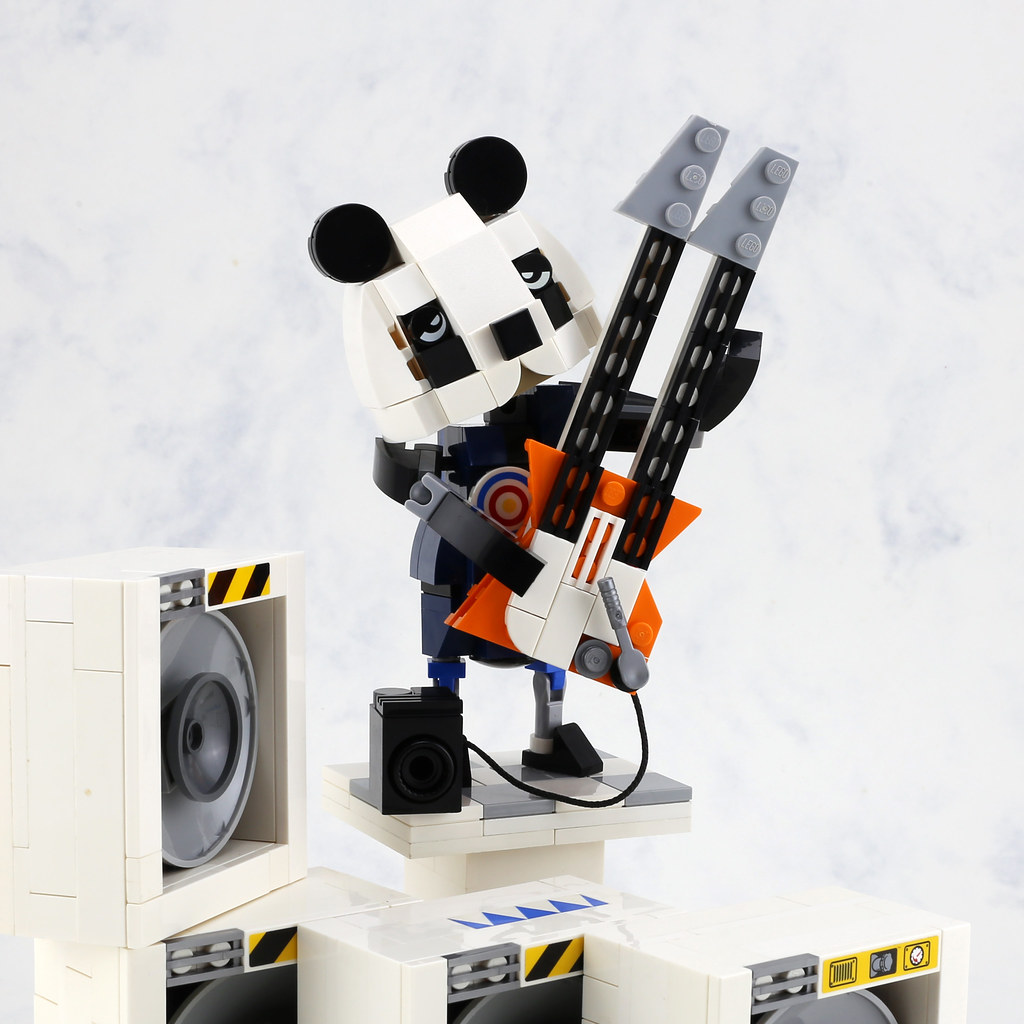 The last member in the band is a horn-toting, guitar-handling swine. This little piggy, all dressed in overalls, is hidden in the main image, which leads me to think maybe he’s not playing but actually the ban’s roadie. His droopy ears and rounded face are beautifully constructed, giving him just the right amount of character for this off-stage member. The modified 1×2 rounded plate with open studs completes his appearance to a tee. 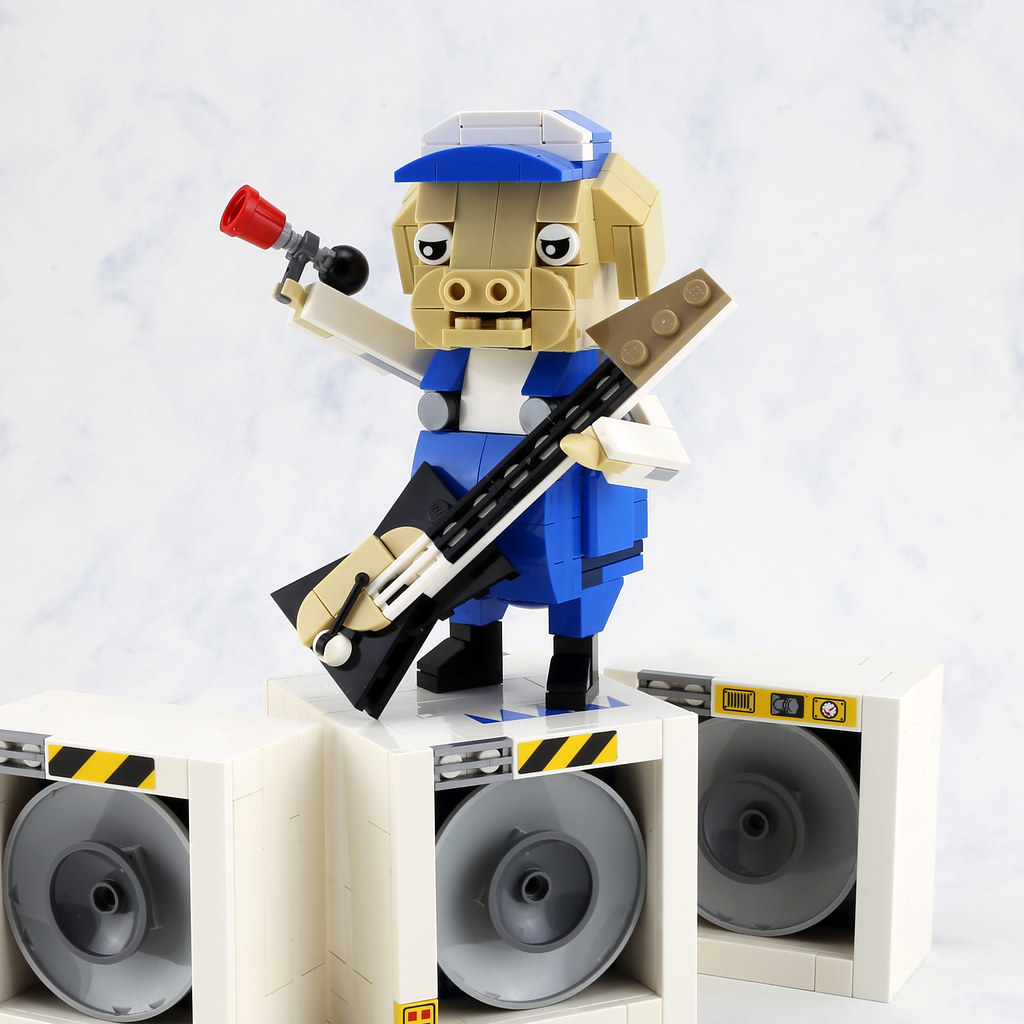 For another take on builds with character, have a look at LEGO 7’s Splatoon 2 creation.