When LEGO builder chubbybots saw the new Jurassic World set with a dinosaur mech (75938), he felt like the Tyrannosaurus needed an upgrade to even the fight. And what an upgrade it is! From the robotic legs with enormous claws to the extraordinarily long arms (for a T-rex), this dinosaur can now pack a punch as well as take one. The powerful blasters on the back look certain to take down any foe, be they robotic or organic. 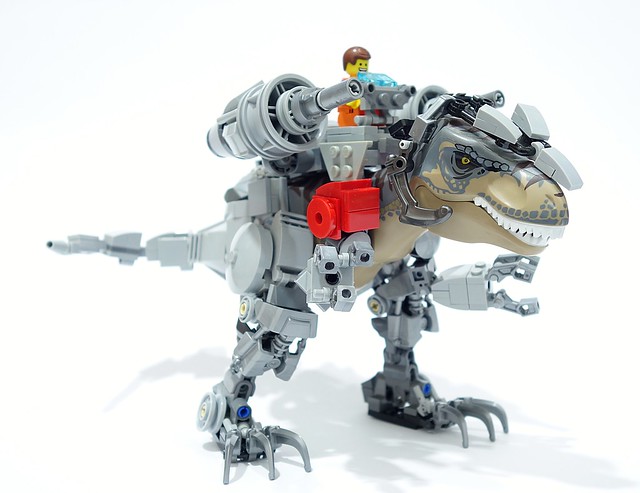 The use of many textures in the greebles both lends an air of authenticity and implies that this is a custom suit made at home, rather than a sleek factory-produced exoskeleton. I love the Bionicle armor covers on the knees, and the splash of red at the shoulders gives the otherwise grey and earthy model a bit of zip. Adding Emmet as the pilot, rather than Owen, is a clever nod to both roles played by actor Chris Pratt. Did the T-rex really need the upgrade? I’m not so sure, as I have seen it take down pretty much every other big bad beast on the island.

1 comment on “I bet she knows how to open doors, too”