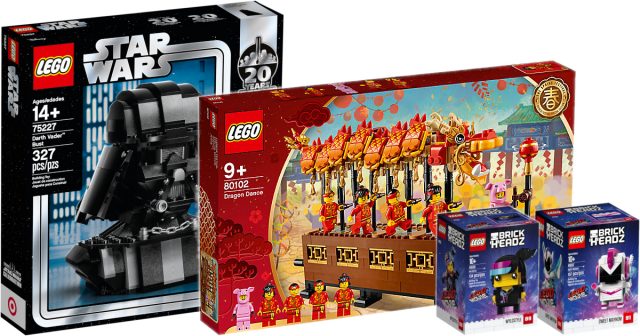 LEGO announced today that new regional exclusives will be available in LEGO Stores and the LEGO Shop Online for a limited period of time after they are launched, starting May 1st. This is a welcome change and should allow LEGO fans access to some of the most sought-after sets without resorting to the secondary market. The general availability period of the sets will start 3-6 months after the regional exclusives launch, which likely means LEGO is in the process of scaling up production runs of future regional exclusives.

The change only applies to regional exclusives and will not affect the limited availability of other sets like the monthly gift-with-purchase promotions, LEGOLAND or LEGO House exclusives like the recently revealed 40366 Dinosaurs, crowd-sourced LEGO Forma sets, or limited access special event sets from Comic Con or the LEGO Inside Tour. While we would love to see more general availability for these excluded sets, today’s announcement is certainly a welcome one that will be celebrated by LEGO fans and collectors worldwide. It also doesn’t appear to apply to any current region-locked sets, only to upcoming releases.

We will keep you informed about any upcoming exclusive set availability and how LEGO rolls out the changes, but in the meantime, their full announcement is included below.

It has become apparent to us at the LEGO Group that you are dissatisfied with the recent launches of regional exclusive products. We’ve received a lot of feedback on the LEGO festival products to mark the Chinese New Year (sets 80101 and 80102), the LEGO The Movie 2 Brickheadz (41634, 41635,41636 & 41637) in the US as well as the LEGO Star Wars 20th Anniversary Darth Vader Bust (75227). Because of this feedback and concerns from you, our dedicated and most loyal fans, we have decided that regional exclusives launched after May 1, 2019 will become widely available via LEGO Brand Retail stores and LEGO Shop at Home after a limited period of time (3-6 months) of the initial launch.

In the following areas we will still be launching products, which will have a certain limitation to availability and production runs:

What do you think of the change to LEGO regional exclusive set availability? Leave your thoughts in the comments below.