To aid LEGO’s ambitious goal of breaking into the enormous Chinese market of potential customers, LEGO is kicking off 2019 with a series of three exclusive sets celebrating the Chinese New Year. All three are only available in the Asia Pacific region. Today we’re looking at the first of these sets, 80101 Chinese New Year’s Eve Dinner. It contains 616 pieces and retails for CNY 699 (about $100 USD) in China, with similar prices in other Asian markets. 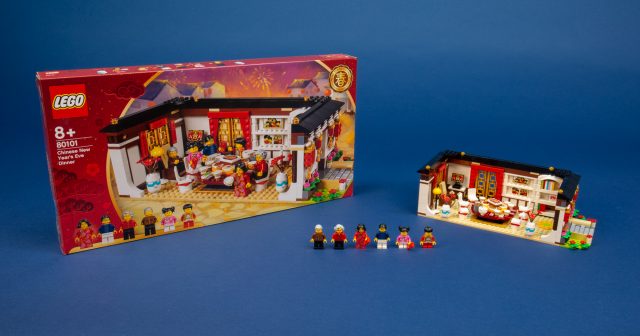 Each set in the series is packaged in a beautiful dark red box with painterly clouds and flowers reminiscent of traditional Chinese art. 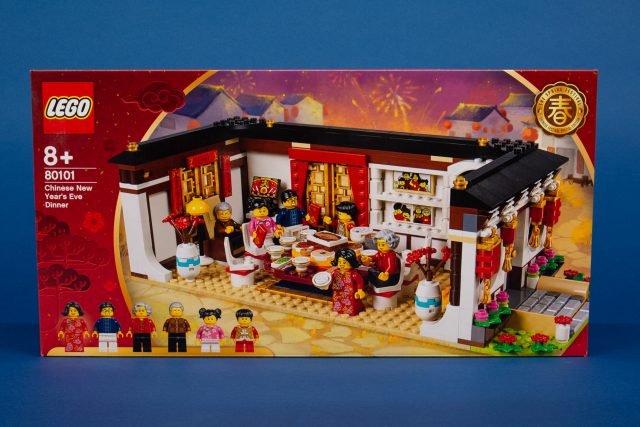 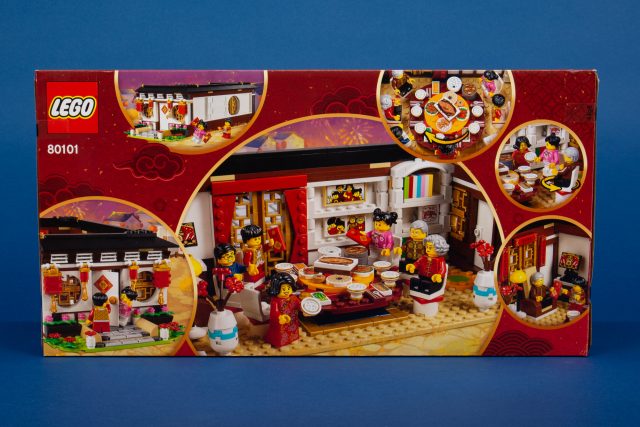 The box’s upper right corner has a medallion marking it as a member of the Spring Festival series. Whether this means there are more exclusive sets in the works remains to be seen, but it seems a safe bet. After all, this isn’t the first time LEGO has created exclusive sets for the Asian market. Since at least 2013, LEGO has annually released an animal set corresponding with the year in the Chinese zodiac. 2018 was the year of the Dog, so LEGO released 40235 Year of the Dog. Naturally, these sets are difficult to come by in the North American and European markets unless you intentionally seek them out from secondary importers. 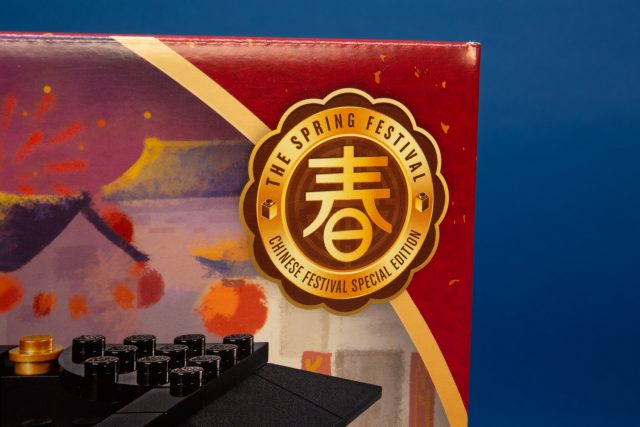 Inside the large box are five numbered bags, two loose 16×16 plates, and a sealed bag containing the instructions and sticker sheet. The instructions feature the same broad multi-language support as any other set sold outside the North American market (where they feature only English, French, and Spanish). 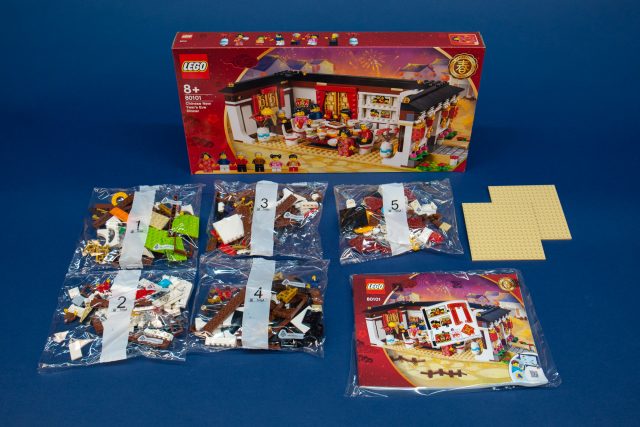 As usual, each of the larger numbered bags contain a smaller bag. The small bag inside Bag 5 is a goldmine for new printed elements, which I suspect is what many LEGO fans (including myself) are most keenly interested in with this set. 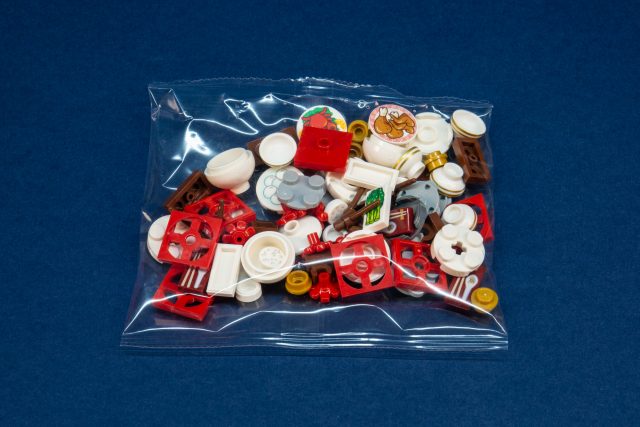 All told, the set includes 15 new printed elements (not counting the minifigures), all of which are exclusive to this set. The two styles of 1×1 round tiles each include a spare element (pictured here). I particularly love that the crabs are LEGO-style crabs. From the top left we have Steamed Fish, Tang Yuan (Sweet Rice Balls), Fried Chicken, Jiao Zi (Dumplings), Shrimp, Spring Rolls, Bok Choy, Crab, Shitake Mushrooms, Soup, Chopsticks/Soup Spoon (x6), Red Envelope (x2), Rice (x6+1), and Nian Gao (Rice Cake) (x1+1). This is the first time I can recall writing a LEGO review making me hungry… 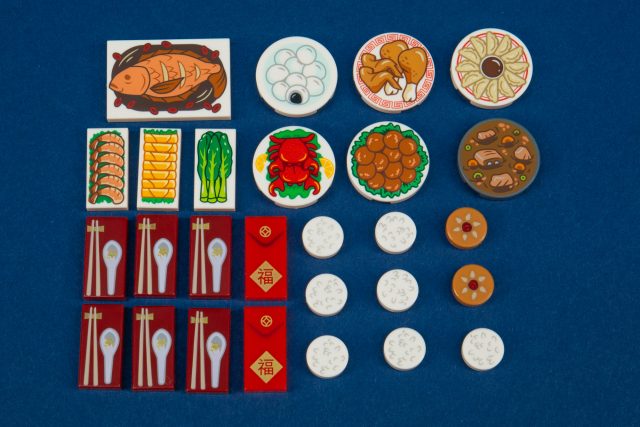 The bowls are also printed with a classy new design. Six are used in the set, with one included as an extra. 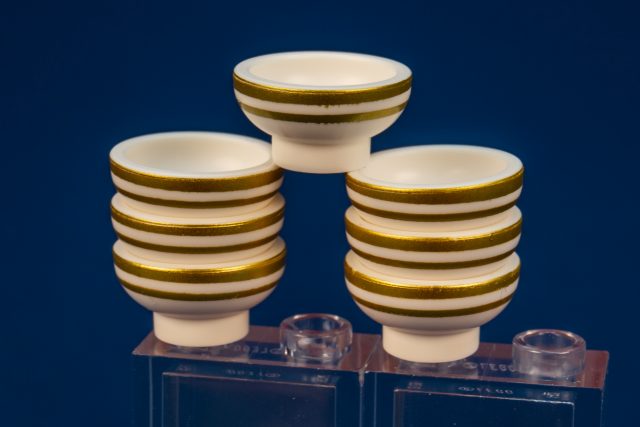 The small sticker sheet covers the rest of the decorative elements in the set. 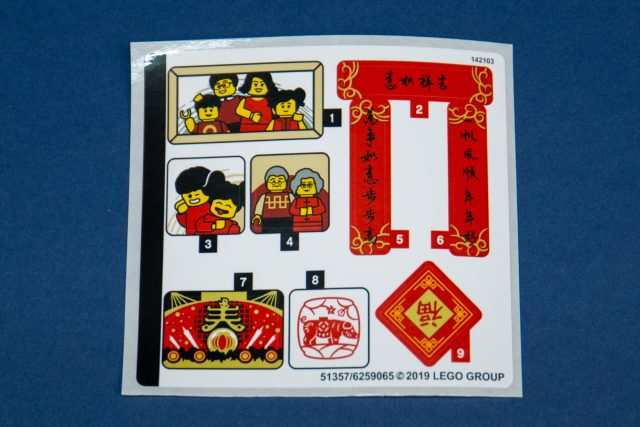 The build begins with just one of the 16×16 tan plates, and adds onto the footprint a bit with a 4×6 and a pair of 6×6 rounded corner plates in lime green. This holds a lovely stone walkway and a bit of shrubbery. The home’s walls are two-studs thick to support the round windows and their decorative grating. 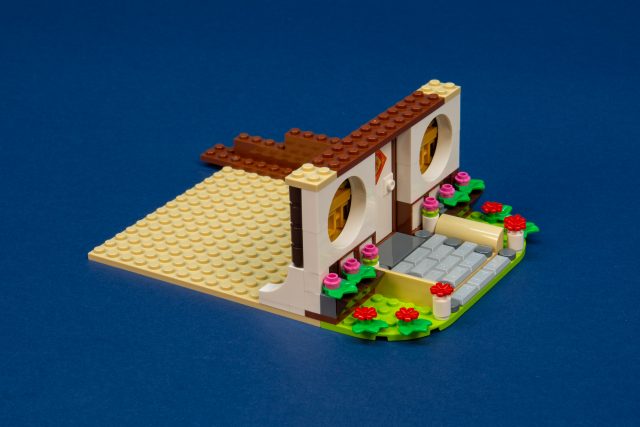 Before moving to the second half of the structure, you fill in the details along the wall, which includes a bookcase. The technique of stacking plates and turning them sideways to represent bookends isn’t new (it isn’t even the first time we’ve reviewed a set that used it), but it’s always great, and it’s used to great effect here. Unlike the food items, however, the wall decorations such as the pig seen here (a LEGO pig featuring a back stud, if you look closely) are all stickers. 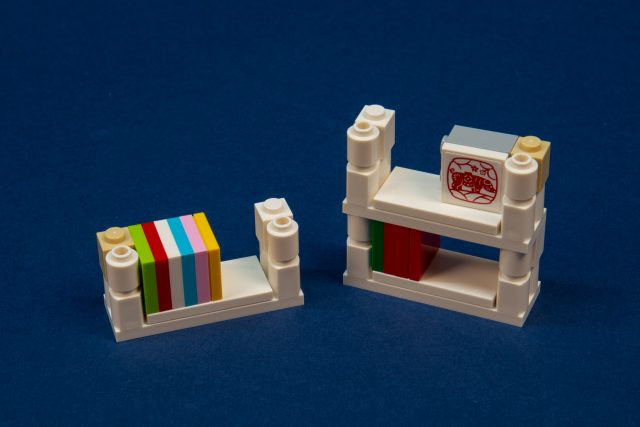 At this point, the other 16×16 plate is added, and the home’s back wall is extended out. The large round window in the back has a large slot in front where sideways fences will slide in, creating a beautiful ornamental window. 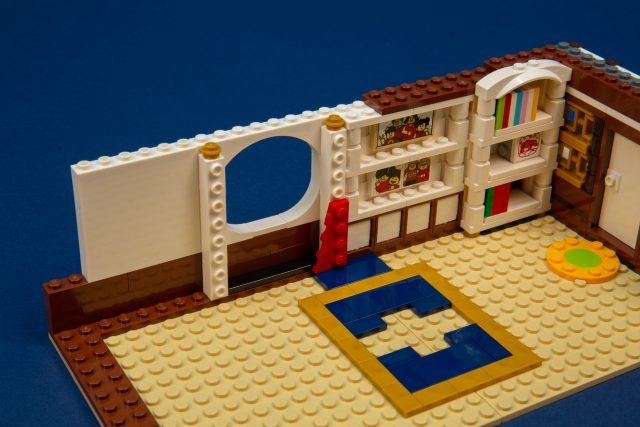 The third and final wall on the left side gets a similar window. The large rug in the room’s center is made of dark blue and pearl gold tiles (16 1×2 gold tiles, in case you’re wondering). The roofline is finished off with just enough black slope bricks to  hint at the full roof. Now all that’s left is the furniture, and of course, the set’s namesake: the dinner. 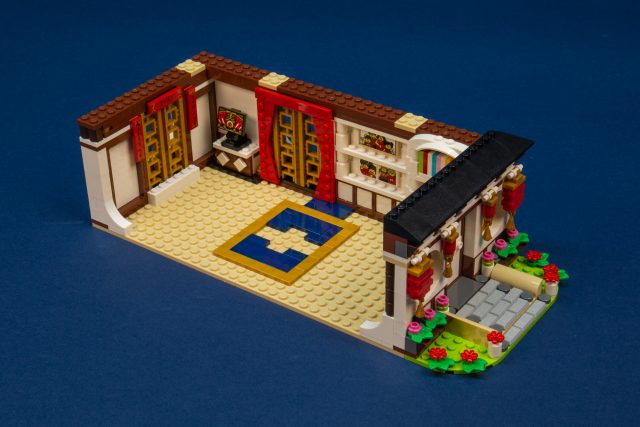 And speaking of dinner, it’s served up on an absolutely massive round table that wouldn’t look out of place in a certain 9th century castle in England. Of course, this one has a huge lazy susan in the center–at least, that’s what we call them in the USA. In China, they’re known simply as dinner-table turntables, which makes much more sense than our derogatory title. 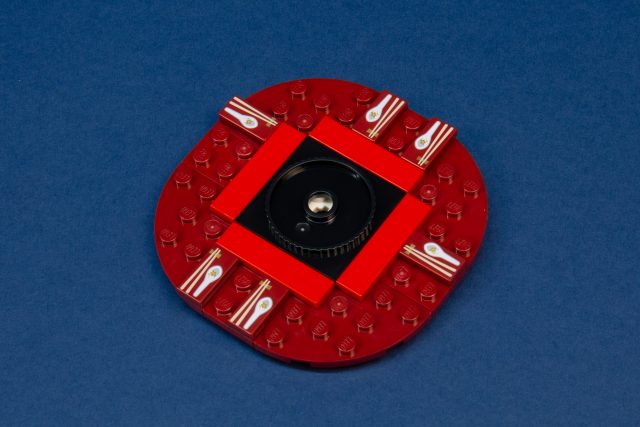 When placing the elements on the table, I encountered a rare instance in an official set of a truly illegal technique, with the rice bowl and soup pot overlapping. It’s a small error, but errors of this nature are so rare in LEGO sets that it’s worth noting. 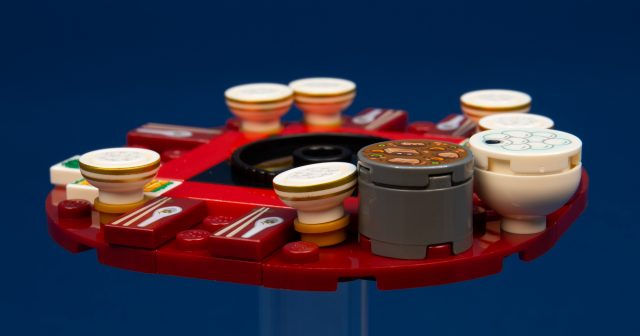 The set isn’t so much a playset as it is a vignette of three generations of family celebrating together. Beyond the door, chairs, and turntable, there are no moving parts or “play” features here. However, the result is gorgeous. 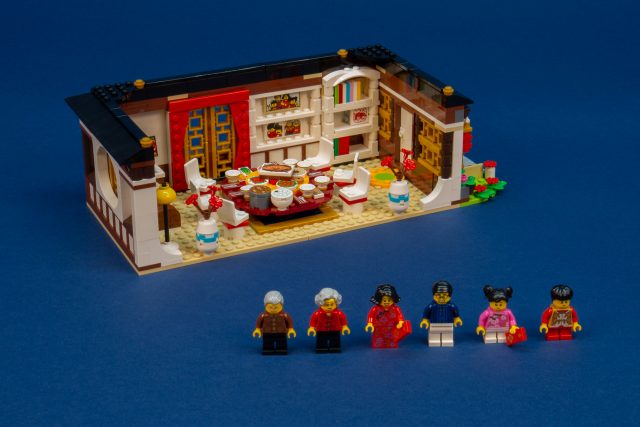 We enlisted the help of the excellent reviewers over at Candidbricks to help us translate the signage. The sign on the door is an upside-down 福 (Fú) character, a sort of Chinese-language pun that’s interpreted as Good Luck Arrives. The door is flanked by several hanging lanterns, and the outermost two are excellent paper lanterns that take advantage of stacking traditional 1×2 plates with the new 1×2 rounded plates to create a ribbed effect. 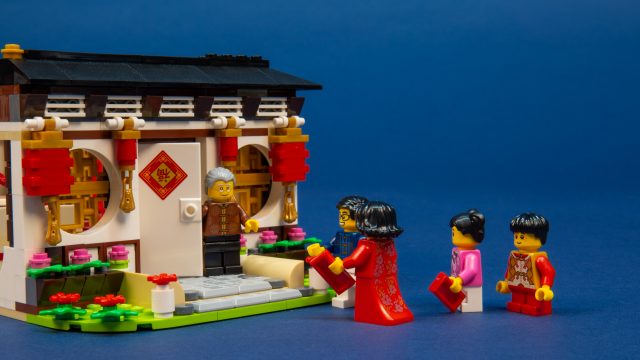 The interior feels roomy, yet is packed with details. 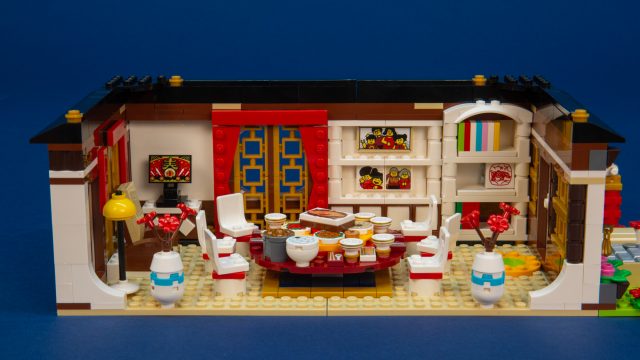 Along the back wall near the door is the bookcase we saw earlier and a similar shelf with family photos. 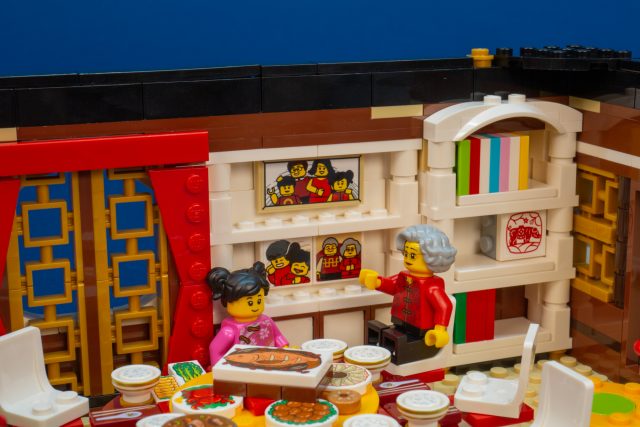 On the other end of the room is a lounge chair for grandpa and a console with a television showing a New Year’s Eve program. The red scrolls adorning the windows are blessings: 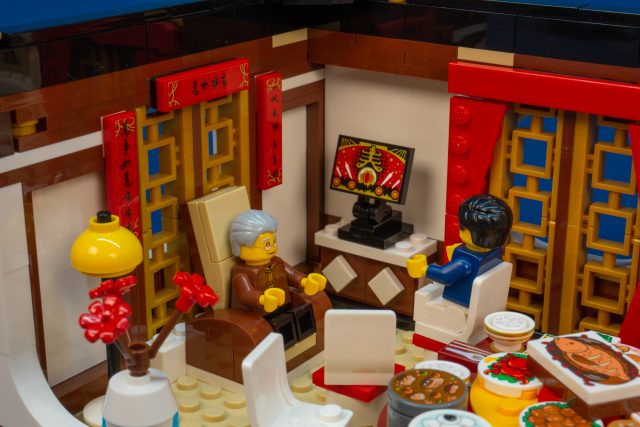 Finally, let’s get to the main course–literally. The table is overflowing with food, which we detailed above, but seeing it all laid out in an epic feast looks amazing. It’s safe to say this is the best-set dinner table that LEGO has ever produced. Each of the chairs is set on a 2×2 turntable, allowing them to orient properly to the table. There are two tiles printed with red envelopes, a traditional method of gift-giving in many Asian cultures, especially at New Year’s. 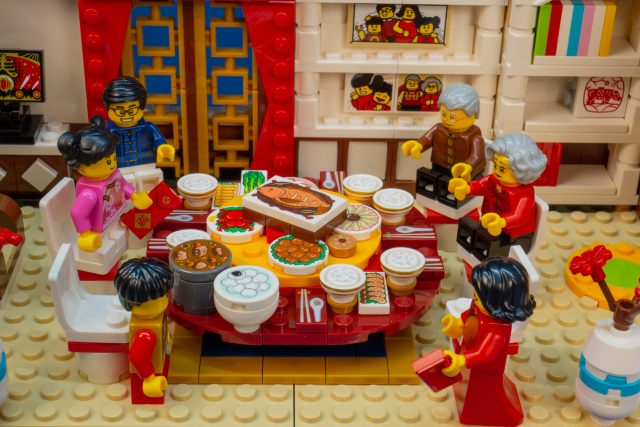 This set would have been the perfect opportunity for LEGO to use the new bendable short legs from the Harry Potter Collectible Minifigures, but sadly the two children have classic style short legs. This means that the two children cannot sit down. And while I’m sure many parents know the feeling, it’s a shame LEGO didn’t employ the perfect solution they already have. 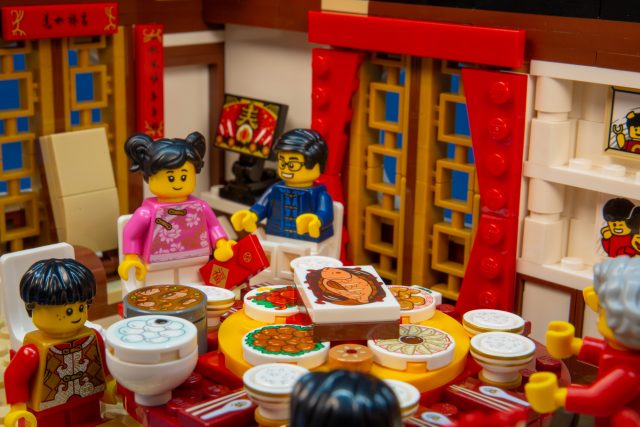 The back of the set clearly isn’t meant to be displayed, but it’s also not ugly. 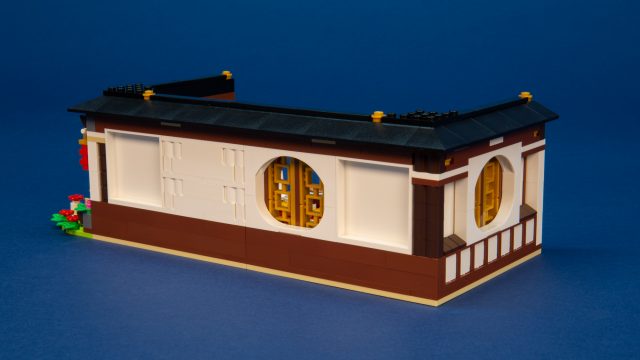 The set’s six minifigures represent three generations of family, and they’re all new, unique designs with stunning traditional-style clothes. The mother’s red dress with purplish-silver flowers is one of the best dress designs we’ve seen from LEGO, aided by the fact that it employs the new dress element. 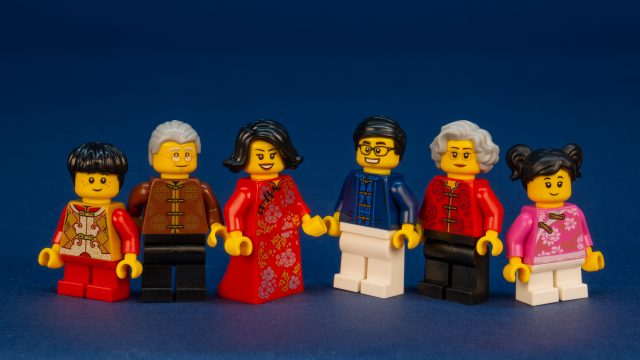 All six minifigures have printed designs on the back as well, with the mother’s dress printed all the way down the slope. 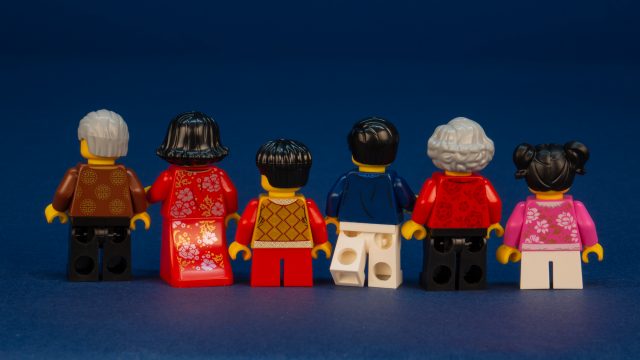 The son, father, grandmother, and daughter each have double-sided faces with alternate expressions. 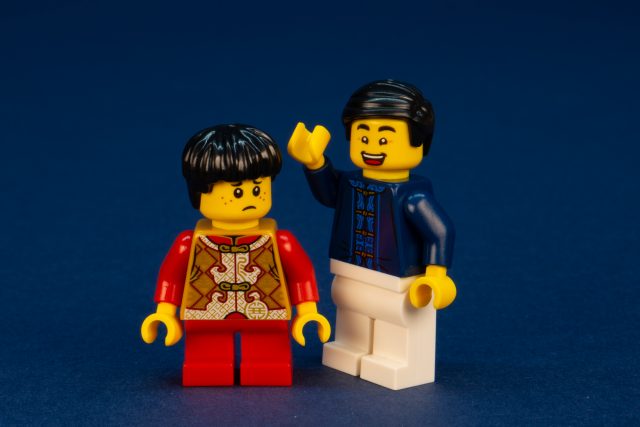 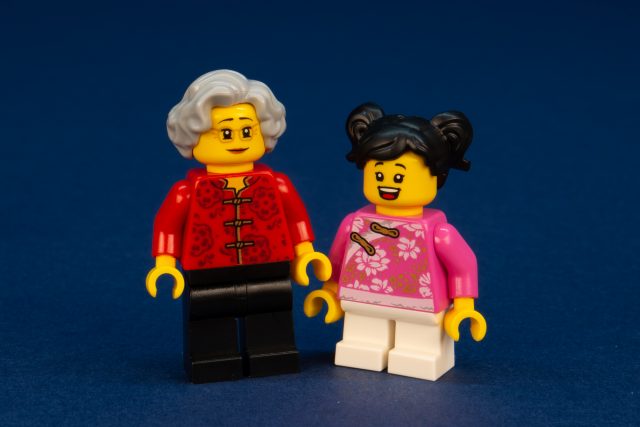 This set is a great way to capture the holiday celebration from the point of view of a family outside LEGO’s traditional market. The design is on point with plenty of excellent details and a wonderful setting, and of course, all the delicious-looking food tiles. The quantity of newly printed elements alone is sure to make many fans want this set, and it expands on the typical Euro/American-centric food offerings of most sets, allowing fans to have more diversity in their LEGO cities. As such, though, we have to address the fact that most LEGO fans outside of Asia will never have a chance to purchase this set. This is a big miss for LEGO. While there are many holidays that aren’t celebrated around the world (including Christmas), New Year’s is celebrated in nearly every culture. Even if the food isn’t the same as it might look in America or Denmark, the message of family togetherness comes through strong. However, LEGO is so devoted to the idea of making this set unavailable outside Asia that they were not even able to accommodate our request for a review copy; instead, we arranged this set to be shipped to us from a retailer in Asia.

80101 New Year’s Eve Dinner will be available January 1 in Asia/Pacific countries only, where it will retail for ¥699 in China, ₩89,900 in South Korea, and $90 in Australia. It includes 616 pieces and six minifigures. Outside of the Asia/Pacific region, it is available from third-party sellers on Bricklink and eBay.