With the Chinese New Year less than a week away, we’re seeing a number of creations inaugurating the Year of the Pig and a new calendar for over 20 percent of the planet. Joseph Zawada provided a detail-filled scene of how the Lunar New Year is likely to be enjoyed next month in San Francisco, California. Held since the 1860s to celebrate Chinese culture in the United States, this parade draws in hundreds of thousands of visitors each year and is the largest Lunar New Year event outside of Asia. The builder recreated a lively portion of the parade in front of the Dragon Gate in San Francisco’s Chinatown. The scene features a ton of popular references to the Lunar New Year, such as dancing dragons and children carrying red envelops containing gifts of money (hóngbāo). There’s even a C-pop float to round off the sensory experience. 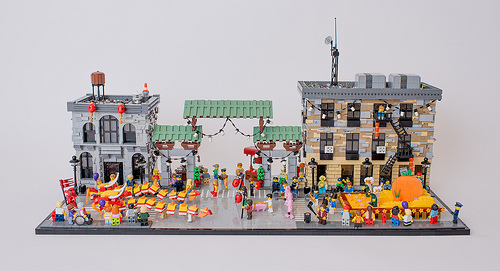 As a quick note, Joseph states he recently worked with LEGO China’s Integration and Engagement team and fifteen other builders to highlight the Lunar New Year in LEGO form (including the Nian beast we recently featured). We’re hoping to see many more creations in the days ahead. We wish our readers great happiness and prosperity for the year ahead!