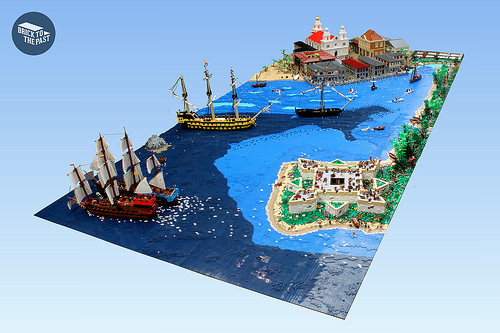 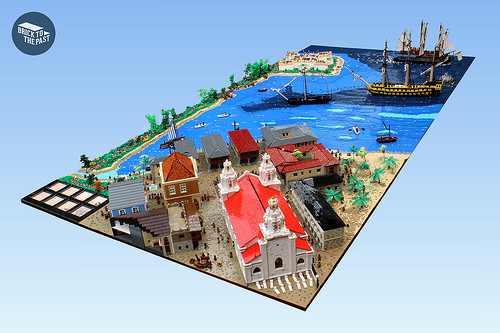 TBB: Who was Henry Morgan, and how did you research his story?

DH: Henry Morgan was a Welsh buccaneer who served the English government during the latter half of the 17th century. This begs the question what is a buccaneer, and how does it differ from a pirate? Buccaneers were a kind of privateer or free sailor who sailed the Caribbean Sea during the 17th and 18th centuries. They usually sailed under the protection of a letter of marque granted by British, French or Dutch authorities. This meant that what they were doing was sort of legal, even though they often pushed their limits and exploited every opportunity to pillage Spanish targets. 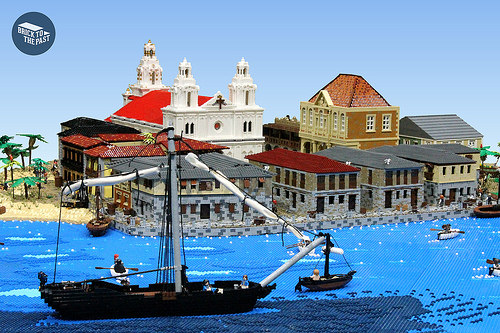 Henry Morgan became an Admiral of the English navy and was employed by the authorities in Jamaica to raid Spanish colonies and disrupt their shipping; in the process amassing enormous personal wealth. At home, he was a hero, being knighted in 1674 and holding the office of Lieutenant Governor of Jamaica on several occasions. To the Spanish he was no more than a pirate, whose activity sat well outside of the rule of law. He died naturally, which was unusual for a person of his profession, on August 25th 1688, having played a major role in setting the unfolding American geo-political scene. 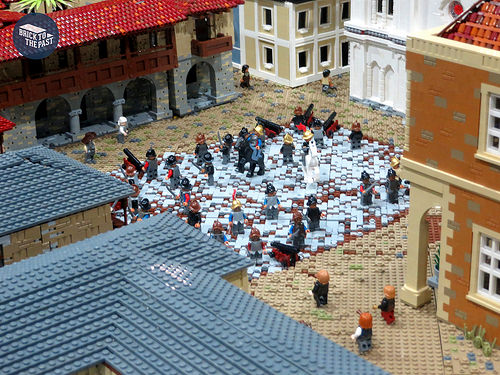 Our model is about Morgan’s 1669 raid on Lake Maracaibo in modern-day Venezuela. During this he captured the fort of San Carlos de la Barra and sacked the towns of Maracaibo and Gibraltar. To escape the tidal lake, the buccaneers also had to defeat a Spanish fleet, which they did through a combination of trickery and brute force. Sea battles were extremely risky so buccaneers tended to avoid them, instead choosing to raid towns and cities such as those on Lake Maracaibo. The whole events were therefore a huge deal at the time. 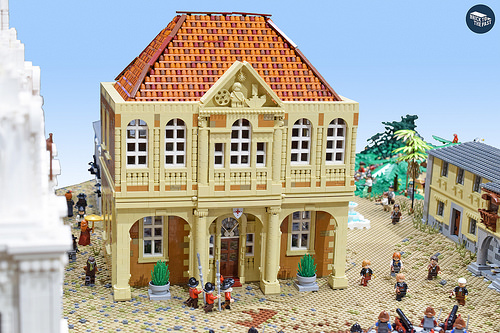 TBB: On a project this big, how does the team divide up the build?

DH: This usually depends on how much capacity our builders have and indeed how many builders are available. This model was built by just four of us, namely James Pegrum, Colin Parry, Simon Pickard and myself. At an early stage we work out a plan based on a grid of 48 stud baseplates and then nominate ourselves to build the bits we find most interesting. One of the important things is to make sure everyone has something interesting to build – so far there have been no arguments! 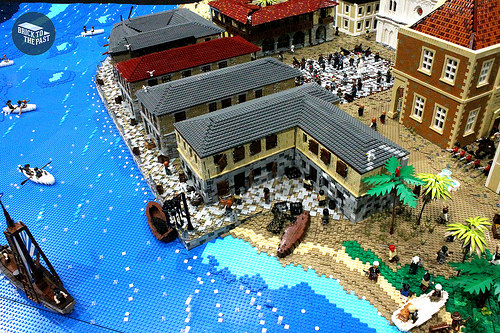 This has actually been one our most straightforward models and to be honest none of it was that challenging. Last year we had real problems managing the workload on our Jacobite model, and we didn’t want to repeat that this year, so from the start, this was designed to be easy. I think James had a bit of a challenge with his weirdly angled roofs; he certainly moaned about them enough! Simon developed a pretty innovative technique for his ship sails, which are actually just connected to the ships via their rigging. These were tricky to set up and also suffered a bit from getting poked by over-enthusiastic children, which to be fair is a hazard with every model. 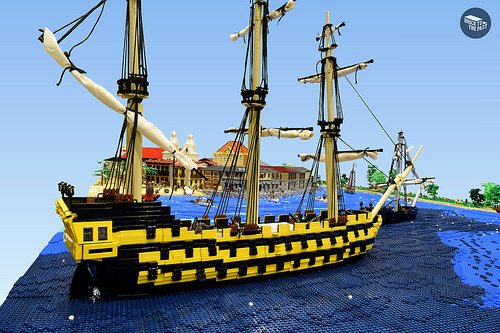 This year we achieved a first in our list of blunders, when I accidently left one of my baseplates at home – this has never happened before and based on the stress this caused me, will never happen again! While I briefly contemplated the 1,000 mile round trip to retrieve it, in the end I decided it best just to phone Simon and ask him to bring some pieces to fill the gap. The final bit of the model was therefore hurriedly put together on the Saturday morning before the Great Western Brick Show started – the visitors never knew anything had been amiss! 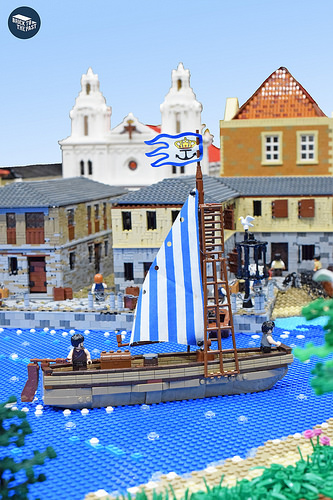 TBB: What features would you say are key to the piece?

DH: Everything we have in the model has a real world point of reference. One of the things we thought was particularly important was to get the architecture of the town right. For this we studied numerous styles from across south and Central America and did research into Spanish colonial town planning. Alongside this we thought it important to get the fort right. We decided that this should be scaled down to avoid it dominating the scene, so while some of it is built with the same layout as the real San Carlos de la Barra, it has a smaller footprint and omits some peripheral features. 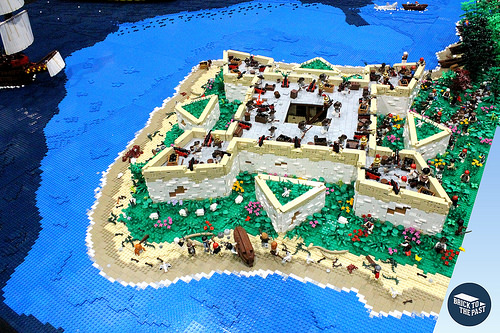 TBB: Your displays are well known for their detail and hidden extras. Are there any parts that people have missed, which you’d like to highlight?

DH: Well there is the man himself! Henry Morgan is hidden away amongst his men surrounded by a big pile of treasure; we based his appearance on an 18th century engraving. That said there is also a second more fanciful version of him in there that’s based on a picture on the side of a bottle of rum, you’ll know the brand, but the less we say about him the better. There are a few more irreverent details, such as some men duelling with bananas and some buccaneers being chased by a big shark. There is also a surprising amount of wildlife hidden in the model, from domestic animals such as goats and chickens to more exotic species such as parrots and puma. 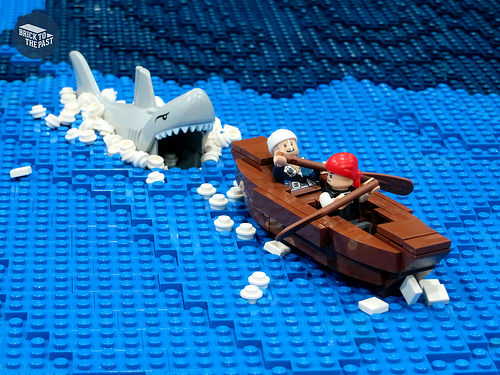 TBB: Have you all started thinking about next year, and if so can you give us some hints?

DH: Next year is the 200th anniversary of the Peterloo Massacre, which took place on August 16th 1819. This is a hugely important event in British working class history, in which the Manchester and Salford Yeomanry charged on a crowd of 60,000–80,000 people, who had gathered to demand the reform of parliamentary representation. They left 15 men, women and children dead and a further 400-700 injured. With advice from the Peterloo Memorial Trust, we will be recreating the area of St. Peter’s Field and the events of August 16th. We haven’t done a model of an urban area since our Victorian London model of 2014 and we are really looking forward to the challenges that lie ahead. The model is likely to be challenging on all sorts of levels, not least because it is dealing with such a traumatic event in Manchester’s history.