Brick To The Past is a collective of UK builders who specialise in large-scale collaborative historical displays at LEGO shows. Their latest model is this thoroughly-impressive layout of the Battle Of Hastings, a key moment in British history…

I was lucky enough to see this display “in the brick” at Bricktastic in Manchester recently. The layout is a monster, with stark yet impressive terrain, and a wonderful collection of minifigs arrayed in battle formation ready to fight. 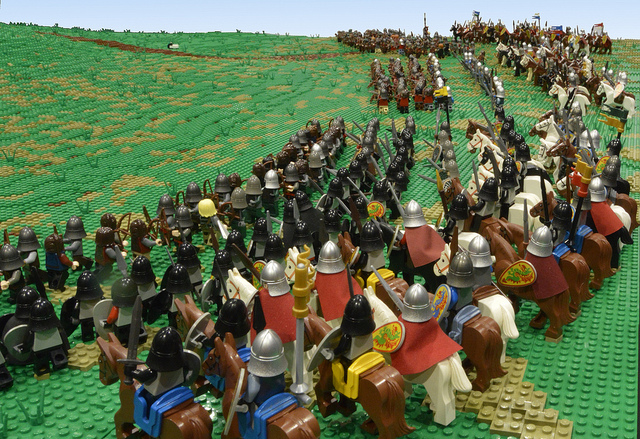 Brothers Brick got in touch with James Pegrum, one of Brick To The Past’s leading lights, to discuss this display and get more details on the challenges of collaborative building.

The Brothers Brick: Let’s get the obvious questions out of the way first. How may figures are in the display? How many bricks is it made of? How long did it take to set the battle up?
James Pegrum: There are 750 figures, with more Anglo Saxons than Normans — it’s not all about numbers! The base of the model is 100 32×32 base plates, with on average 500 plates per 32×32. There’s a lot of brick under Caldbec Hill! It took two people about an hour and a half to set up all the figures for the display.

TBB: Why did you pick the Battle of Hastings for a build this year?
JP: As a historical event it’s as important as the recent referendum vote for the UK to leave the EU. Although today we do things without killing each other in the thousands. I’m glad to be alive now and not then! It’s a big milestone this year for us English — 950 years since the battle. Whilst I’m still young, it’s unlikely I’ll be building at this scale in 50 years time when we celebrate 1,000 years!

TBB: Tell us more about Brick To The Past — What prompted you to get together, how many builders are involved, and is it the same guys all the time?
JP: Brick To The Past formally did our first collaboration in 2013 with Tigelfah Castle, but the birth was back in 2011 when I did Haradford Castle with Barney Main. The following year it was Roman Colchester with Tom Coleman and with that build a few of us started discussions about doing a larger collaboration. At the time it was Luke Hutchinson, Simon Pickard, Tom Coleman, and Harry Russell. Unfortunately Simon couldn’t take part and so I drafted Colin Parry, Jimmy Clinch, and Steve Snadell — so in 2013 there were seven of us.
The following year Simon was able to join us for our Victorian London display, though a number of others weren’t able to make it — so it was Jimmy, Steve, Simon, and myself. Colin drafted in Dan Harris, and in 2014 we decided to do Hadrians Wall with six builders. This year’s main build will be revealed in full at The Great Western Brick Show in October. It was built by six of us, with Tim Goddard coming over on a project release from the Spacers — you never know he may get converted! 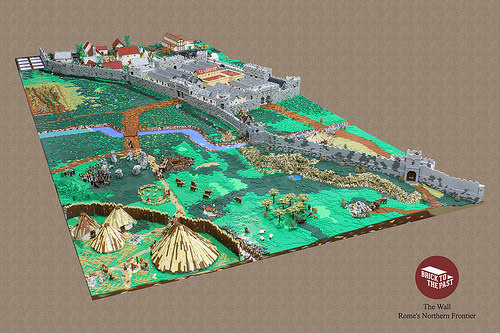 TBB: What are the particular challenges of a collaborative build?
JP: The biggest challenge has to be linking up with the other builders. Each person’s stock is different — in volume, color, parts. The builds work because everybody enjoys doing their own section, something which is key to effectively working together. We take the time to draw up a plan early on — this ensures the right amount of space is allocated, whilst getting it all to work together. We have already started work on our display idea for 2017 with our first plan! We normally get to about eight revisions by the time we finish, so there’s a lot of discussion.

TBB: We’ve seen you guys build amazing castles, fabulous Victorian city scenes, huge Roman encampments, and now an enormous battle. What’s next for Bricks To The Past?
JP: We’re conscious we’ve focused mainly on England to date, so we’ve got longer-term plans to explore more global elements of British history. Last year we got the opportunity to purchase some Redcoats — this led to much discussion about what we would do. For now we’ve decided to stay in the British Isles, but we’ve moved quite a bit further North than Hastings! I think that’s enough of a cliffhanger to leave you on for now…