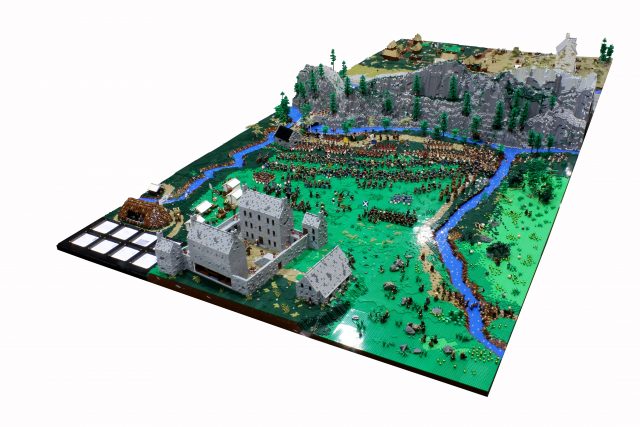 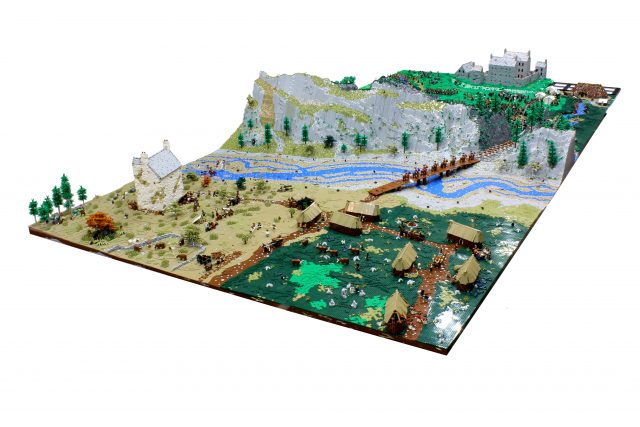 BTTP never really know how many parts they use, but they think it’s in the 750,000 to 1 million range for the build plus about 2,00 minifigures. 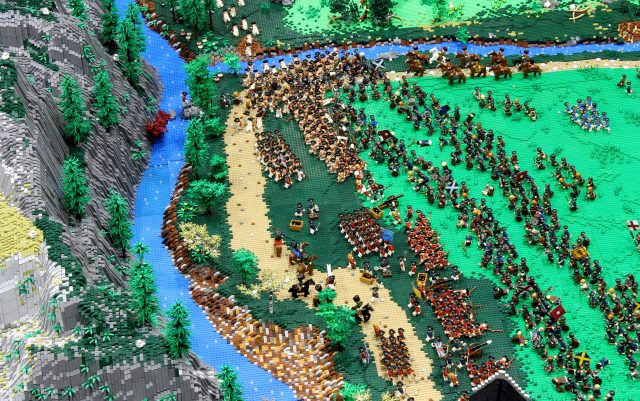 On one side there is a detailed model of Corgarff Castle and on the other , Ruthven Barracks, which was built after the 1715 rising in an attempt to prevent further conflict. 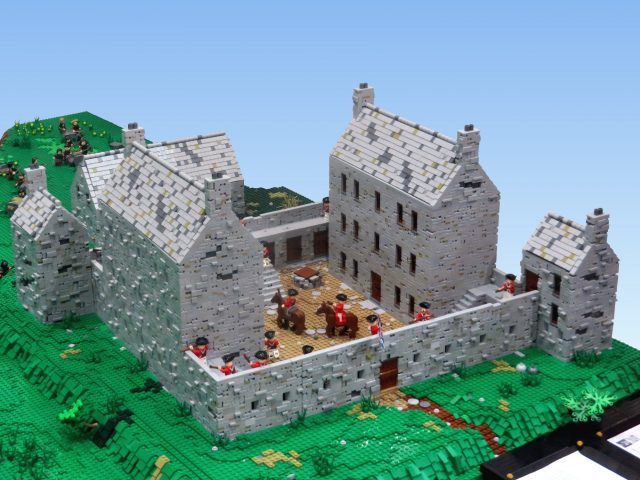 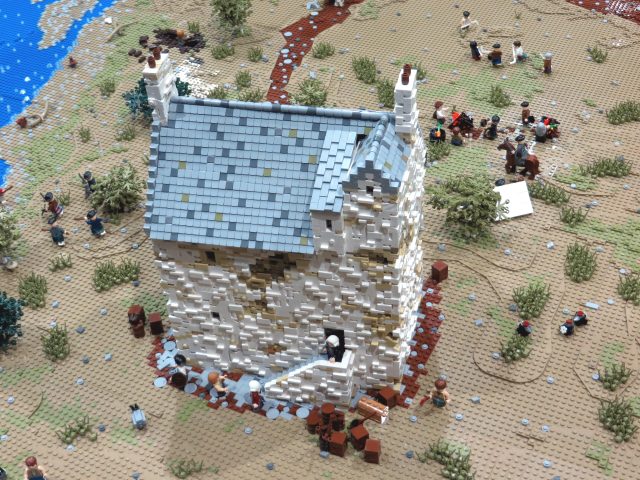 One of the other aspects of BTTP’s huge models is that there are many different smaller stories and details to spot.  I love the brick built animals that appear in the highland landscape,  including deer, capercaillie, ptarmigan, osprey and black grouse. 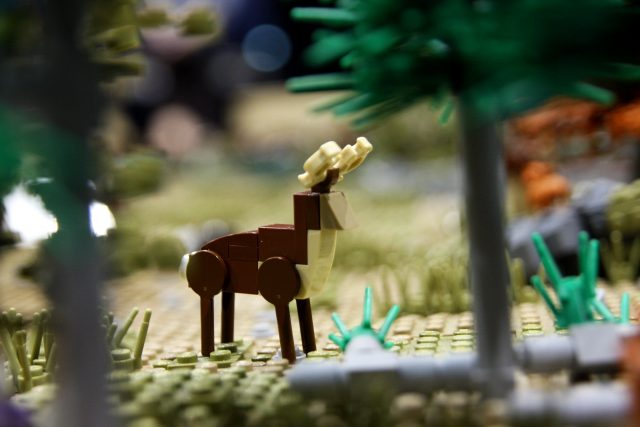 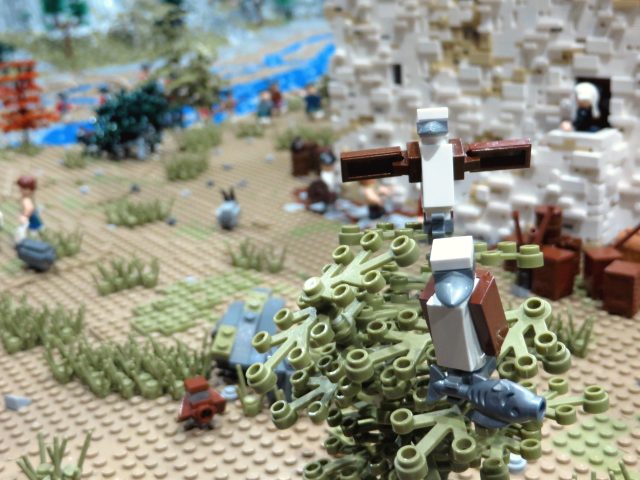 The Brothers Brick had an opportunity to speak with Dan Harris from the BTTP team and ask a few more details about their  Jacobite Risings creation.

TBB: Can you tell us more about this year’s big build?

BTTP: This year’s big build is called ‘The Jacobite Risings: The Fight for Britain’s Throne’. The risings took place between 1689 and 1746, mostly in Scotland as supporters of the Stuart dynasty attempted to restore them to the throne. They were effectively Britain’s last civil wars.

The model is around 16 square metres in size, sitting on the equivalent of 105 48 stud baseplates. It has a mountain in its centre that reaches about 1m high. It was built by Dan Harris, James Pegrum, Simon Pickard, Tim Goddard and Steve Snasdell and took around 10 months to complete. 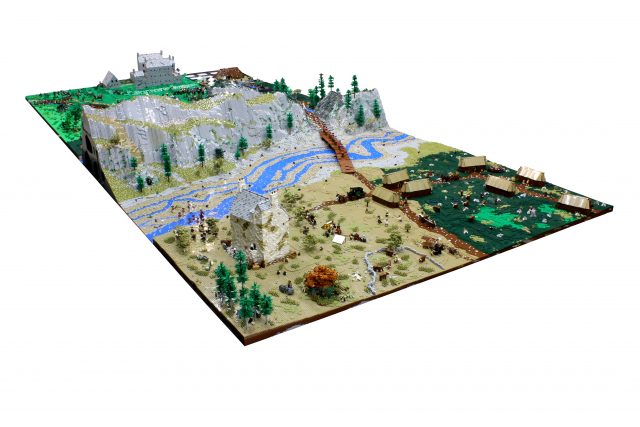 We never really know how many parts we use, but we think it’s in the 750,000 to 1 million range, although this is a really rough estimate.

TBB: Why did you chose the Jacobite Risings and what research did you have to undertake prior to starting the build?

BTTP: 2017 is Scotland’s Year of History, Heritage and Archaeology, so we wanted to build something that had a strong Scottish theme. This turned out to be a great move because we’ve been able to piggy back on a lot of ongoing publicity and events which has meant that we’ve reached a much wider and more diverse audience than usual. 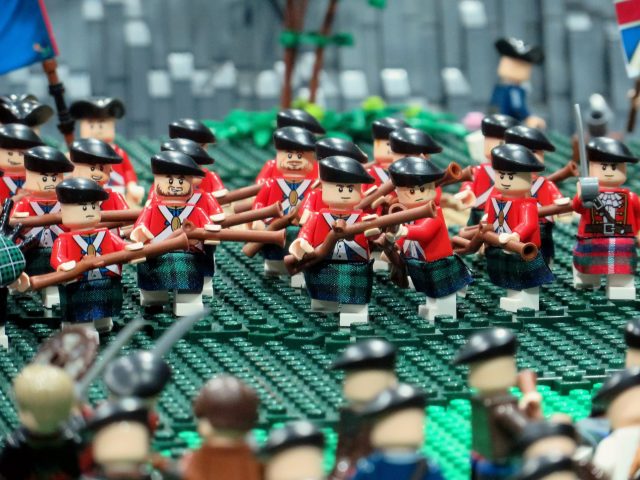 As always, we did a lot of reading in preparation for the model and I now have quite a respectable library on 17th and 18th century Scotland. This year we’ve also been able to pack in a lot of field trips because I live within about half an hour of most of the buildings and features we’ve included in the model. Highlights included visits to Culloden Battlefield, Corgarff Castle, Ruthven Barracks and the Highland Folk Museum. 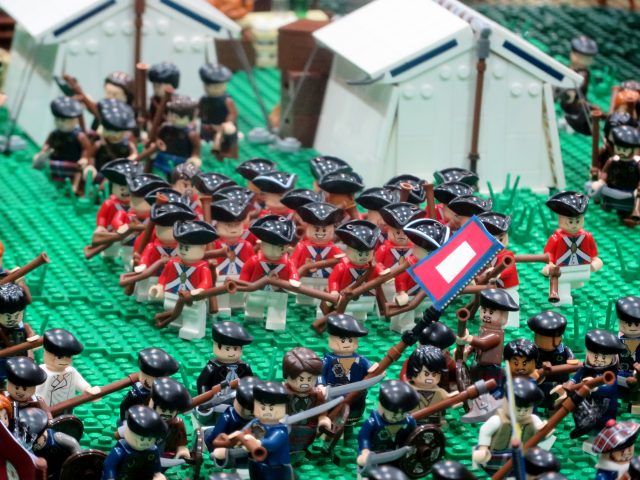 TBB: What are the key features of the model?

BTTP: The most striking feature of the model is probably the 1 metre high mountain that runs across its centre. This was built by James Pegrum and is made entirely out of LEGO. It takes an age to set up and James describes it as a nightmare! The mountain and the landscape around it are alive with brick built animals, which are characteristic and in many cases unique to the Scottish Highlands, including capercaillie, ptarmigan, golden eagle and black grouse. 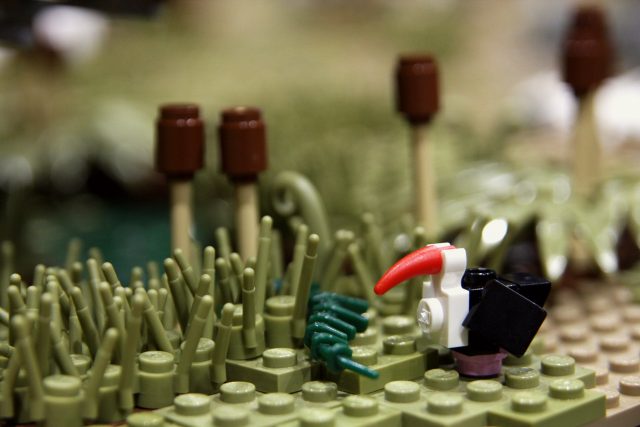 The model also has a pretty epic battle between Jacobites and redcoats, which we’ve roughly based on the Battle of Killiecranckie, which took place in July 1689. Stylistically, our armies are based on a later date, but we wanted to be able to recreate the awesome geography of that part of the Highlands. There are about 2,000 minifigures on the model, with the vast majority on the battlefield. 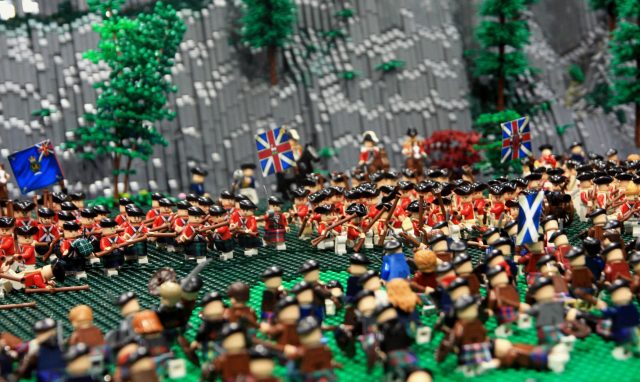 Finally, we also wanted to create a glimpse of everyday highland life, so Simon Pickard and Tim Goddard have built a number of highland houses characteristic of rural life during the period. These are bought alive with all sorts of traditional activities, such as waulking the cloth, peat cutting and shinty. 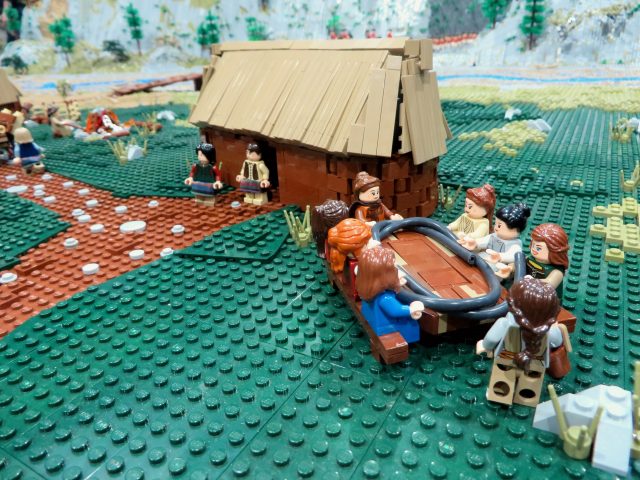 TBB:  How do you divide up parts of the build amongst the team of builders and do you find some build faster than others or can on take a greater volume of the final footprint?

BTTP: We have a plan that is drawn out right at the beginning and our builders get to choose what they want to build and they can build as little or as much as they like. We try and make sure everyone has got something interesting to do because our main aim is to have some fun! Some of us can build faster than others, which is why we were able to display about 80% of the model back in July, This year has been a been quite hard going because due to unforeseen circumstances some of our builders had to drop out late in the process. Of course we know life is full of surprises, so we always have contingency plans and everything was fine in the end.

TBB: Are there different smaller scenes and stories that each builder likes to add to the overall build to make their mark?

BTTP: Story telling is an important part of what we do and while most of the stories we tell are simple tales of everyday life, some are based on historical accounts. Part of our mountain has a cave system that tells the probably mythical story of Sawney Bean, who is said to have been the head of a family of cannibals who lived in a cave in Ayrshire. 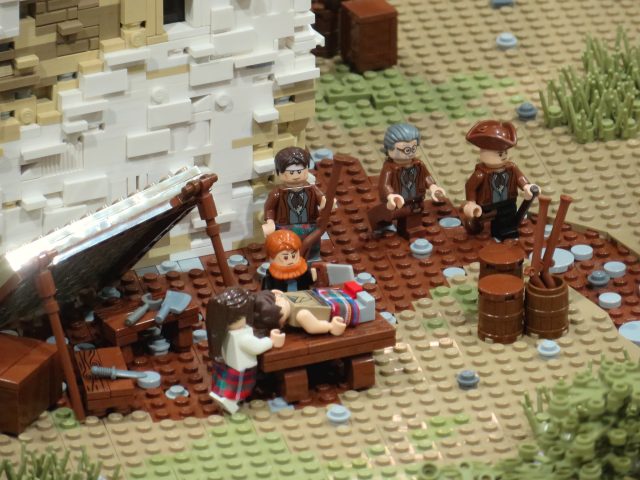 Another story we tell is that of a government soldier named Donald McBane, who while fleeing the now victorious Jacobites at the Battle of Killliecranckie, ran down the hillside towards the River Garry and leapt the 18 foot gap of the river’s gorge to escape. 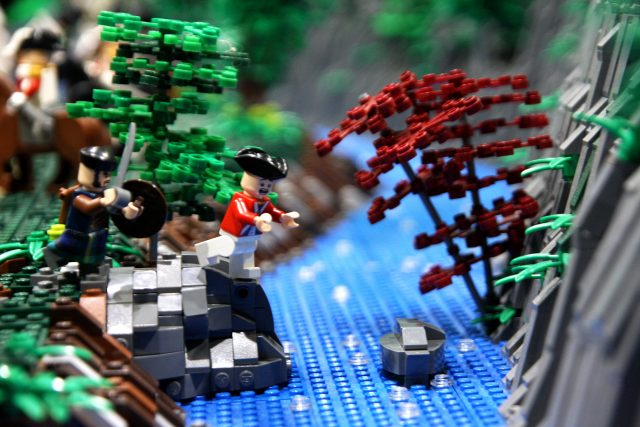 TBB: Where can people see the model in person?

BTTP: The model is currently on display at Stirling Castle and will be there until the end of January. This is an amazing venue and well worth a visit in its own right, so if you like history and you like LEGO then you need to go!

TBB: Brick to the Past is known for their huge, detailed models, how many of your models stay build past the year point?

BTTP: Our models usually get taken apart before we get going on our next project, but we do keep bits of them. From this model we will be keeping Corgarff Castle, Ruthven Barracks and the highland township. We’ve already built up quite a good collection of models that cover different periods in British history and we plan to bring them all together to create a really high quality exhibition sometime in the near future. 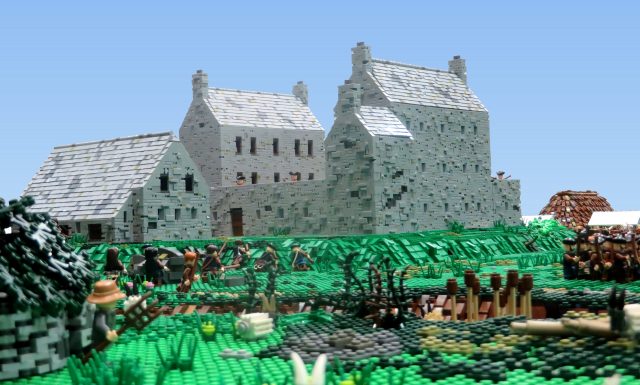 TBB: Has work began on the next model or is there a period of relaxation after a build is finally complete?

BTTP: There is no rest! We have a number of commissions that we are working on in the background and planning for next year’s big build is already under way. For the last couple of years we have been pretty landscape focused, so our next project is going to be something quite different – we will have an announcement in the New Year!

TBB: Thanks for taking the time to talk to us and we look forward to hearing more about your next big project.